With a sprawling empire of 39,000 restaurants in 119 countries, McDonald’s serves more beef than any other restaurant chain on the planet – between one to two per cent of the world’s total. Selling hundreds of hamburgers every second has entrenched the fast-food giant as an outsized contributor to climate change.

Cattle belch out large quantities of heat-trapping methane, making beef the most harmful food for the climate, with at least five-times the warming of pork or chicken and more than 15-times the impact of nuts or lentils. Beef is responsible for about a third of McDonald’s climate footprint. At more than 53 million metric tonnes of carbon per year, McDonald’s produces more emissions than Norway – and that number is still rising. 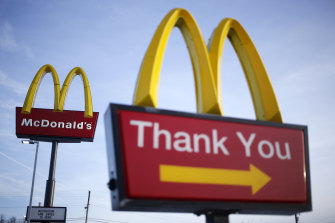 McDonald’s has 39,000 restaurants around the world.Credit:Bloomberg

For the past decade, McDonald’s has vowed to address the planet-warming problem behind its most popular menu item. In 2011, the fast-food giant helped launch the Global Roundtable for Sustainable Beef, an industry-backed group aimed at improving a variety of cattle-raising practices. Next the company promised to purchase some of its beef from sustainable sources, and followed that move with a 2018 pledge to trim the climate intensity of its food and packaging by 31 per cent by 2030. It went a step further in October, announcing it would zero out its entire climate footprint by 2050.

“When you eat one of our world-famous burgers, you’re joining a movement toward a more sustainable future,” declared McDonald’s in one of its progress reports.

But an in-depth examination of the company’s headway – including a review of its beef sustainability pilot projects as well as dozens of interviews with current and former McDonald’s executives, cattle ranchers, industry experts and scientists – shows that the world’s biggest hamburger chain so far hasn’t reduced the climate impact of its beef. “There does not seem to be any proactive involvement or serious investment by McDonald’s to support its suppliers or make significant changes in its beef supply chain,” says Nic Lees, a senior lecturer in agribusiness management at Lincoln University in Christchurch, who studies beef sustainability programs in several countries.

The pledges cast a spotlight on the enormous challenge facing fast-food companies with brands built around a menu item that is harmful to the climate. McDonald’s doesn’t disclose how much beef it sells, but company officials have said in investor presentations that beef is its “largest menu category and growing” and that burgers are key to expanding its sales.

Overall emissions at McDonald’s have gone up by 7 per cent since 2015, but the company says it has reduced the emissions intensity of its food and packaging – measured by the amount of greenhouse gases per tonne of product – by nearly 6 per cent in that time. The company declined to provide specifics on how it achieved those improvements.

McDonald’s executives say the company has made substantial efforts to clean up its climate impacts, and that beef’s complicated supply chain will require collaboration across many different companies and industries. “For more than a decade, McDonald’s and our supplier partners have invested in curbing deforestation, advancing science and establishing industry-wide sustainability programs,” a spokeswoman said in a written statement.

The linchpin of the fast-food giant’s efforts has been a five-year-old pledge to procure an unspecified quantity of sustainable beef in its ten biggest markets around the world, a goal McDonald’s recently claimed to have fulfilled. But, in many cases, the company has purchased beef through sustainability programs that don’t actually require cattle ranchers to adopt climate-friendlier practices.

Another point of emphasis for McDonald’s has been its funding of programs that help cattle ranchers and farmers improve the health of their lands, which will sometimes allow more carbon to be stored in the soil. But the dollar amounts are microscopic for a company that notched $US19.2 billion ($27 billion) in sales and $US4.7 billion in profits last year.

In one of its most-publicised projects, McDonald’s is working with Cargill, the Walmart Foundation, and the World Wildlife Fund to improve grazing practices across the northern Great Plains of the US The restaurant chain’s contribution: $US1.6 million over five years, or about $US320,000 per year. In another, McDonald’s has teamed up with Target, Cargill, and the Nature Conservancy to spend a combined $US8.5 million over five years to improve land-management practices in Nebraska. McDonald’s won’t disclose its contribution; if spread equally, the cost would be $US425,000 per year for each participant.

“We don’t really see ourselves in the role of telling people which protein to eat because of environmental concerns.”

McDonald’s annual tab for the two projects likely amounts to just over one hour’s worth of its net profits.

“Companies like McDonald’s get a lot of positive press for making these commitments,” says Jennifer Jacquet, an associate professor of environmental studies at New York University. “But then there’s very little follow up and follow through.”

McDonald’s officials defend the company’s commitment to sustainable beef and point out its efforts have gone far beyond just a couple of partnerships. They also stand by the company’s approach, including letting the beef industry define what “sustainable” beef means. “If we had taken the approach from the jump to just go in and tell the ranching community to do X, Y, and Z, we would have failed upon arrival,” says Jenny McColloch, chief sustainability officer at McDonald’s. “What we’ve done a lot of is listening, connecting, meeting and visiting ranches and farms…[We] want to show them that we’re partners and we’re here to celebrate their sector rather than tell it to do something else.” 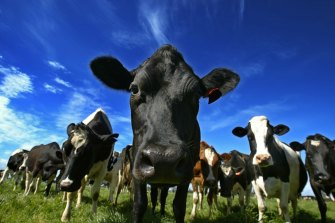 Cattle belch out large quantities of heat-trapping methane, making beef the most harmful food for the climate.Credit:Craig Abraham

Slashing emissions from a global beef supply chain is an incredibly daunting task. While McDonald’s declines to provide specific details about its supply chain, company officials have said in the past they purchase hamburger patties from about twenty suppliers around the world. Those hamburger suppliers procure beef from thousands of slaughterhouses, which obtain cattle from millions of different ranches and feedyards.

Historically, McDonald’s has interacted little with cattle producers at the other end of the beef supply chain. “Customers logically view McDonald’s as having knowledge and control of the Big Mac all the way from farm to fork,” wrote former McDonald’s executive Bob Langert in a 2019 book about the company’s sustainability efforts. “But the truth is that we know how to grill burgers, make fries, and clean the bathrooms – not how to use antibiotics or raise animals.”

Langert, who left the firm in 2015, said in an interview that McDonald’s deserves substantial credit for embarking on these sometimes-awkward conversations with cattle producers, while gently prodding them to think more about environmental impacts. “Getting them to recognise that sustainability is part of the business is a big first step,” he says. “But now’s the time for making progress.”

Some cattle ranchers, however, remain openly hostile to the idea of companies like McDonald’s inserting themselves into discussions about how animals are raised. At a 2019 conference organised by R-CALF USA, an industry group that represents more than 5,000 cattle producers, Wyoming rancher Tracy Hunt gave an hour-long speech entitled “Truth About the Global Roundtable for Sustainable Beef.” He joked about lynching one of the roundtable’s founders and warned the audience of dark motives behind sustainable beef. “It’s about an unprecedented attack on you, your family, your private property, your liberty, your way of life,” he said. “They want to put you out of business.” (Reached by phone, Hunt said he stands by his concerns and called his lynching comment “hyperbole.“)

McDonald’s, like other fast-food brands, is reluctant to pay more for climate-friendlier ranching practices. “We see it as a sector-wide and society-wide responsibility to help support these transitions, because we can’t do it alone,” says McColloch of McDonald’s.

Part of the problem is that hamburger chains buy lean trim, which is only about one-third of the meat that comes from a cow. Most of the carcass consists of pricier ribeye steaks and roasts, which fast-food companies don’t purchase.

It would be particularly difficult for a brand like McDonald’s, which specialises in selling $US1 hamburgers, to single-handedly incentivise better environmental practices, because it’s hard for them to recoup any added cost from customers, according to Leonardo Lima, a former sustainability executive at Arcos Dorados, the largest McDonald’s franchisee, which operates over 2,200 restaurants in Latin America.

“For companies like McDonald’s, Burger King and others, hamburgers are like a commodity; our price is almost standard,” says Lima. “This is a cost that we can’t assume in our products.”

While some cattle ranchers understand this predicament, they say progress will be minimal without additional funds. Lyle Perman, who raises more than 500 cows at Rock Hills Ranch in South Dakota, has been showcased by McDonald’s in its marketing materials for his sustainable practices – such as cutting back on synthetic fertiliser and halting tillage on his lands, which promotes soil heath and can sequester more carbon.

But, he said, convincing large numbers of ranchers to adopt these practices will take a financial incentive that doesn’t currently exist. Adds Perman: “The marketplace, so far, has not provided a signal to cattle producers to use more sustainable practices.”

If one of the world’s biggest beef buyers can’t make headway on its own, that means industry groups such as the Global Roundtable for Sustainable Beef and its offshoots in individual countries are potentially even more important. But progress has been glacial. When the global roundtable was created 10 years ago, McDonald’s nearly quit the group because it moved at a “snail’s pace,” according to Langert’s book. Today, there are still very few tangible programs linking up large beef buyers and producers to incentivise climate-friendlier practices.

Fast-food companies like McDonald’s could alter their menus today to address the climate crisis and “redefine what American fast food looks like,” adds Molidor. “Instead, they’re making a triple cheeseburger.”

McDonald’s insists that its menu caters to the desires of its customers, who might eat somewhere else if significant changes were made. “We don’t really see ourselves in the role of telling people which protein to eat because of environmental concerns,” says McColloch of McDonald’s. Rather, she says, the company prefers to “make sure we’re serving that protein in as responsible a way as possible.”

But therein lies the company’s quandary. If McDonald’s won’t steer customers to climate-friendlier alternatives and professes to have limited power to shrink the footprint of beef, how can the company sell ever-more hamburgers while claiming to be on a path to dramatically decarbonise its business?

“I’m taken aback by the greenwashing by McDonald’s,” says Kari Hamerschlag, deputy director of the food and agriculture program at nonprofit Friends of the Earth. “There’s a fundamental contradiction here between the corporate imperative to grow and the ecological imperative to reduce emissions.”