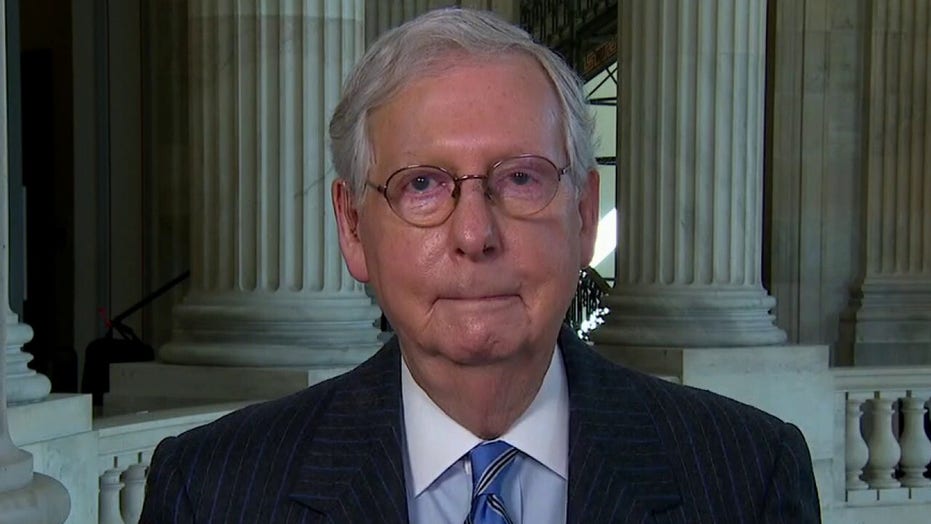 Joe Biden’s plan to form a commission to “reform” the court system meant that he was “open to” court packing, Senate Majority Leader Mitch McConnell, R-Ky., argued on Thursday.

“Court packing ought to be completely unacceptable,” the Kentucky Republican told Fox News’ Dana Perino on “The Daily Briefing.”

“It was when Joe was chairman of the Judiciary Committee,” McConnell continued. “Now when he's hedging, the answer is yes, he's open to it.”

McConnell called the practice the "perfect way to destabilize the judiciary."

"Ginsburg had it right last year she said that nine is the right number," the Senate leader said.

The Democratic nominee told CBS’ “60 Minutes” he is going to form a commission to examine "how to reform the court system" after playing coy with the media about his stance on court packing.

After repeatedly saying voters would get to know his stance on the matter after the election, Biden last week said he'd let voters know where he stands before the election.

"If elected, what I will do is I'll put together a national commission, a bipartisan commission of scholars, constitutional scholars, Democrats, Republicans, liberals, conservatives," Biden said in a clip released on Thursday. "I will ask them to, over 180 days, come back to me with recommendations as to how to reform the court system because it's getting out of whack."

"It's not about court packing," he continued. "There's a number of other things that our constitutional scholars have debated, and I've looked to see what recommendations that commission might make. … There's a number of alternatives that go well beyond packing."

Biden claimed that "a lot of conservative constitutional scholars" agree that this issue needs to be revisited.

"The last thing we need to do is turn the Supreme Court into just a political football, whoever has the most votes gets whatever they want," he said. "Presidents come and go. Supreme Court justices stay for generations."

As Republicans push full speed ahead to confirm Judge Amy Coney Barrett to the Supreme Court, cementing its 6-3 conservative majority, some Democrats have called to add justices to the Supreme Court should they win back the presidency and the Senate in November.

Biden had repeatedly dodged the matter, but has previously said “I have not been a fan of court packing.”