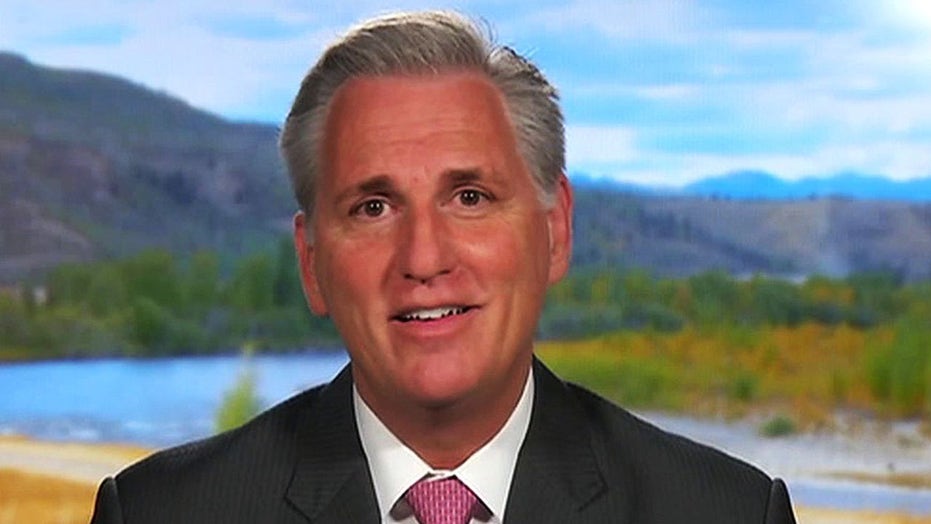 Rep. McCarthy: Trump showed that he puts people in front of politics

“Remember, every time we've done legislation when it comes to COVID, Nancy Pelosi has always held it up for her own personal wish list,” McCarthy said during an interview on “Sunday Morning Futures.” Remember when we did the Cares Act, she held it up for more than a week when thousands of people were being unemployed because she wanted more money for the arts and the Kennedy Center… now when we are sitting here coming forward with people unemployed again, she held it up.”

McCarthy’s comments come a day after Trump signed his executive orders following the collapse of negotiations with Congress on a new coronavirus rescue package.

Trump's orders on Saturday encroached on Congress' control of federal spending and seemed likely to be met with legal challenges. The president cast his actions as necessary given that lawmakers have been unable to reach an agreement to plunge more money into the stumbling economy, which has imperiled his November reelection.

Trump moved to continue paying a supplemental federal unemployment benefit for millions of Americans out of work during the outbreak. However, his order called for up to $400 payments each week, one-third less than the $600 people had been receiving. How many people would receive the benefit and how long it might take to arrive were open questions.

The previous unemployment benefit, which expired on Aug. 1, was fully funded by Washington, but Trump is asking states to now cover 25 percent. He is seeking to set aside $44 billion in previously approved disaster aid to help states, but said it would be up to states to determine how much, if any of it, to fund, so the benefits could be smaller still.

Pelosi and Senate Minority Leader Chuck Schumer, D-N.Y. dismissed Trump's actions as “meager” in the face of economic and health crises facing Americans. Democrats initially sought a $3.4 trillion package, but said they lowered their ask in talks to $2 trillion. Republicans had proposed a $1 trillion plan.

"Today’s meager announcements by the president show President Trump still does not comprehend the seriousness or the urgency of the health and economic crises facing working families," Pelosi said in a joint statement with Schumer on Saturday. "We’re disappointed that instead of putting in the work to solve Americans’ problems, the President instead chose to stay on his luxury golf course to announce unworkable, weak and narrow policy announcements to slash the unemployment benefits that millions desperately need and endanger seniors’ Social Security and Medicare."

Trump's Democratic opponent in the presidential race, Joe Biden, called the orders "a series of half-baked measures" and accused him of putting at risk Social Security, which is funded by the payroll tax.

The use of executive actions also drew criticism from Republican Sen. Ben Sasse of Nebraska.
"The pen-and-phone theory of executive lawmaking is unconstitutional slop," said Sasse, a member of the Senate's Judiciary and Finance panels. He added that Trump "does not have the power to unilaterally rewrite the payroll tax law. Under the Constitution, that power belongs to the American people acting through their members of Congress."