Hogan, whose wife, Yumi Hogan, is the first Korean American first lady of a U.S. state, tweeted that he was “horrified by the appalling violence committed in Georgia” and called the event an “unspeakable tragedy, and the latest in a series of attacks against Asian Americans.”

The shootings occurred at three massage parlors in the Atlanta area. Robert Aaron Long of Woodstock, Georgia, has been arrested as the lone suspect in the shootings. South Korea’s Ministry of Foreign Affairs confirmed on Wednesday that four people of Korean descent were among those killed.

During a Sunday CNN appearance prior to the Atlanta shooting, the Maryland governor praised President Joe Biden’s condemnation of “vicious hate crimes” against Asian Americans. He added that increases in Asian discrimination in the U.S. as a result of the coronavirus pandemic had personally affected his family.

“It really has been a serious problem. My wife, my three daughters, my grandkids, all Asian, and they’ve felt some discrimination personally,” Hogan said. “But they also have close friends ― friends of my wife from church, some of my daughter’s friends, who’ve really been treated pretty terribly. Hate crimes in general last year were down 7%, but it was up 150% in the Asian community, and it’s outrageous, it’s unacceptable, and I think it was great that President Biden brought this up.”

Hogan added that his daughter was sometimes afraid to visit him due to Americans of Asian descent being attacked by people “yelling about the China virus” ― a reference to former President Donald Trump’s frequent moniker for COVID-19.

Hogan became the stepfather of three adult daughters from his wife first marriage after they wed in 2004. 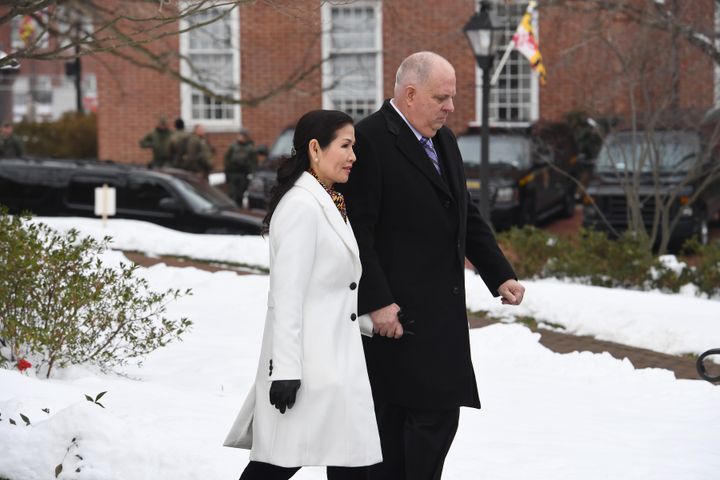 The Maryland governor has credited his wife, who was born in Nanju, South Korea, and immigrated to the U.S. in her 20s, with helping him handle the coronavirus pandemic by facilitating Maryland’s purchase of more than 400,000 COVID-19 tests from the South Korean health care company LabGenomics last year.

Hogan has also been a vocal critic of Trump, and he penned an editorial in The Washington Post in July 2020 mentioning that the former president once called South Koreans “terrible people” at a dinner party in front of his wife.