LVMH, which owns brands such as Louis Vuitton and Dior, is the world's largest luxury goods conglomerate, with revenue reaching about $59 billion in 2019.

In 2020, the company, like the rest of the luxury sector, was economically impacted by the pandemic and store closures throughout the world. In the first nine months of the year, it recorded revenue of €30 billion ($37 billion), down 21% from this time last year.

But in a press statement, the company said it was showing "significant improvement" in its third quarter. Its fashion and leather goods division, for which organic revenue declined by 11% over the first nine months of the year, saw a double-digit rebound of 12% growth in the third quarter.

When news of a COVID-19 vaccine first broke, LVMH shares skyrocketed, briefly making its chairman and CEO, Bernard Arnault, the second-richest man in the world. A few days after the Pfizer vaccine was announced, Arnault added $7 billion to his wealth. He is now the fourth-richest person in the world, with a net worth of $113 billion.

LVMH has also been in the news this year after it threatened to call off its multibillion-dollar acquisition of US jeweler Tiffany and Co., first announced for $16.2 billion in 2019, but reduced to $15.8 billion in the fall after a lengthy dispute between the two firms. The deal is still the largest and most expensive in the luxury sector and is set to close in early 2021.

This means Tiffany will join the other 75 brands owned by LVMH, but it won't necessarily be the conglomerate's most iconic — keep reading to see 17 of the most iconic brands the luxury giant currently owns, ranked in chronological order of LVMH's acquisition date.

Le Bon Marché Rive Gauche: Le Bon Marché opened in 1852. In 1984, before Bernard Arnault created LVMH, he bought luxury goods company Agache-Willot-Boussac. He renamed it Financière Agache and sold some of the company's assets. One of the assets he kept was Le Bon Marché, which became part of the LVMH Group in 1987. 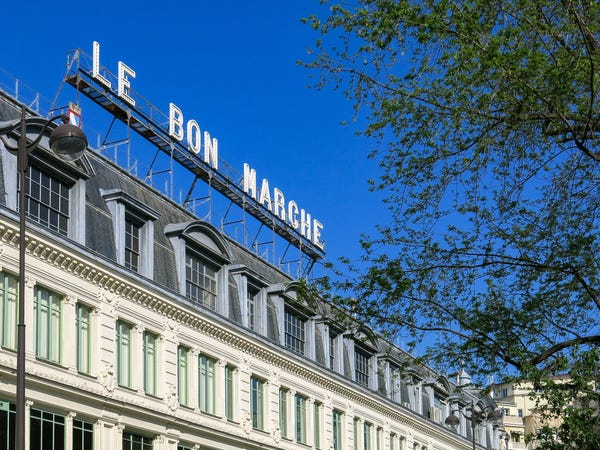 Most recognizable for: Le Bon Marché is recognized as being the world's first department store. The Paris store is noted for its high-end retail and careful selection of goods across the store.

Louis Vuitton: Louis Vuitton was one of the first acquisitions LVMH made, when the group was first founded in the 1980s. The name Louis Vuitton is found within the title of LVMH, whose initials came from the merger between Louis Vuitton and Moët Hennessy. 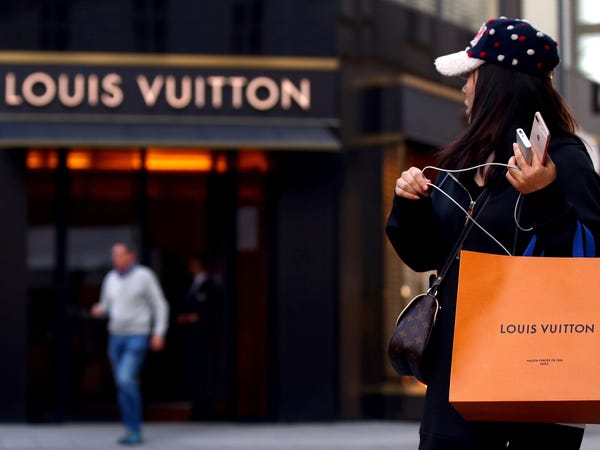 Most recognizable for: The brand is known for its bright orange shopping bags and its leather products, which are usually heavily emblazoned with its "LV" logo.

Dom Pérignon: This company is one of the oldest among LVMH's portfolio. The Champagne company was one of the initial brands part of Moët Hennessy, which later merged with Louis Vuitton to create LVMH. 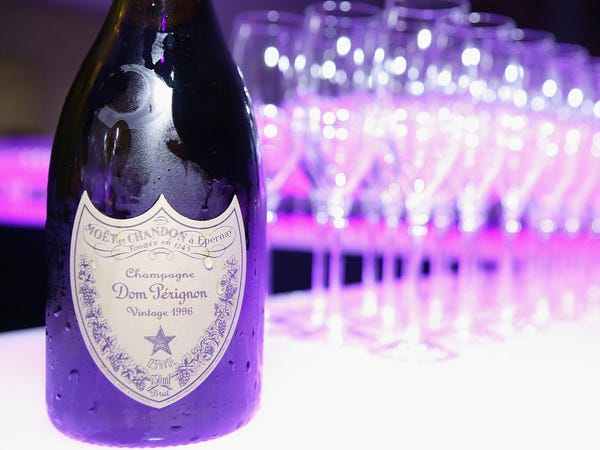 Most recognizable for: Dom Pérignon is one of the oldest companies in LVMH's portfolio. It was founded in 1668.

Hennessy: Founded in 1765, the famous cognac brand has since become one of the most famous liquors in the world. 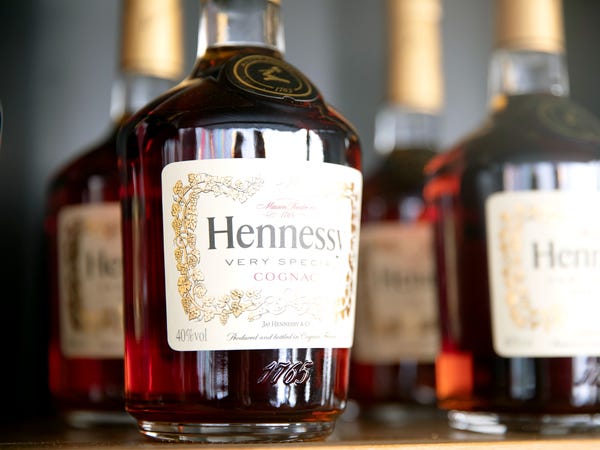 Most recognizable for: Hennessy is one of the most famous cognac brands in the world. The brand's headquarters are in Cognac, France, about a five-hour drive from Paris.

Moët & Chandon: Founded in 1743, Moët & Chandon has since become one of the most popular Champagnes in the world. 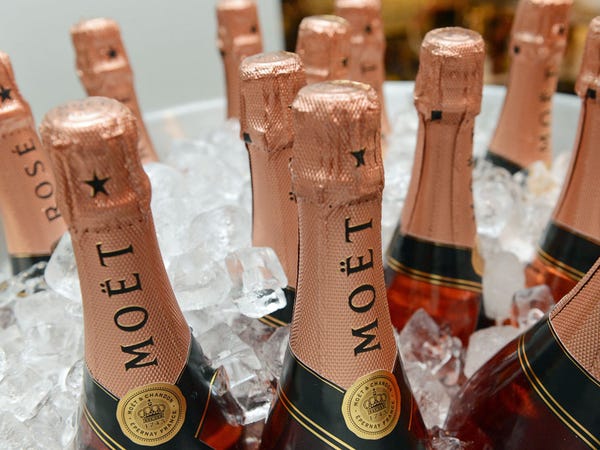 Most recognizable for: Moët & Chandon is one of the most famous Champagnes in the world. Prices start at around $40 a bottle.

Givenchy: The luxury brand was founded in 1952, and has since become one of the most popular brands in the world. 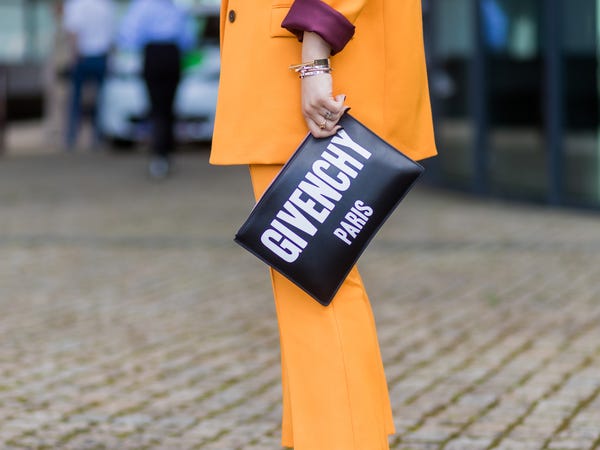 Most recognizable for: Givenchy is best known for creating the iconic little black dress Audrey Hepburn wore in the film "Breakfast at Tiffany's."

Source: The Fashion Law, Who What Wear

Sephora: The global cosmetic chain was founded in 1969, and was acquired by LVMH nearly 30 years later. 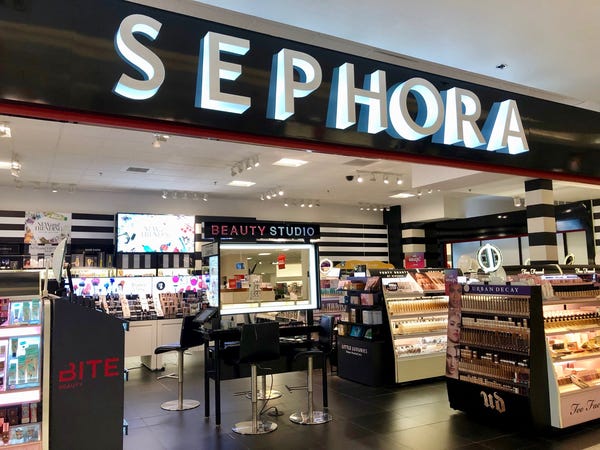 Most recognizable for: Sephora is known for being one of the top beauty stores in the world. Sephora has more store locations than its rival, Ulta, and carries a variety of high-end brands, among them Fenty Beauty by Rihanna and Kat Von D.

Marc Jacobs: Named after its founder, the brand Marc Jacobs was founded in 1984. Its namesake founder was once the creative director of Louis Vuitton before he left the brand to focus on his own. 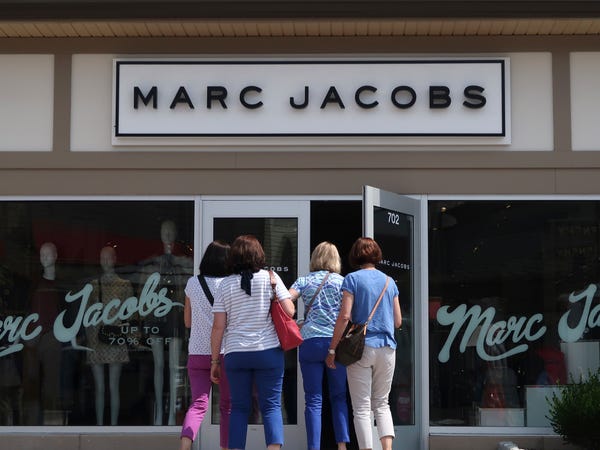 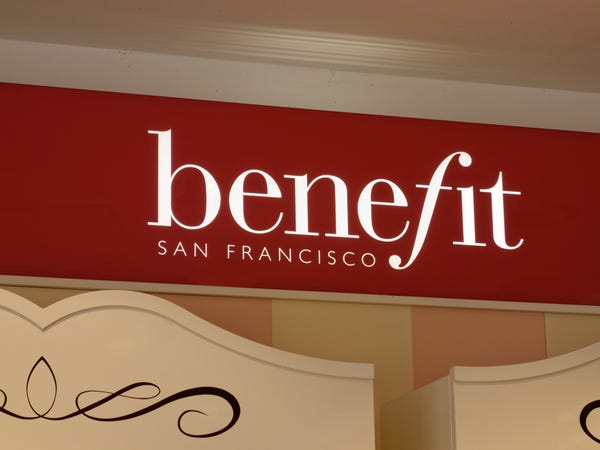 Most recognizable for: Benefit is a cosmetics company, best known for its makeup. It is sold in Sephora, which is also an LVMH brand.

Fendi: This brand, founded in 1925, was once led by legendary designer Karl Lagerfeld. It was previously owned by both Prada and LVMH, until the latter bought out Prada in 2001. Over the years, LVMH has raised its ownership stakes to 84%. 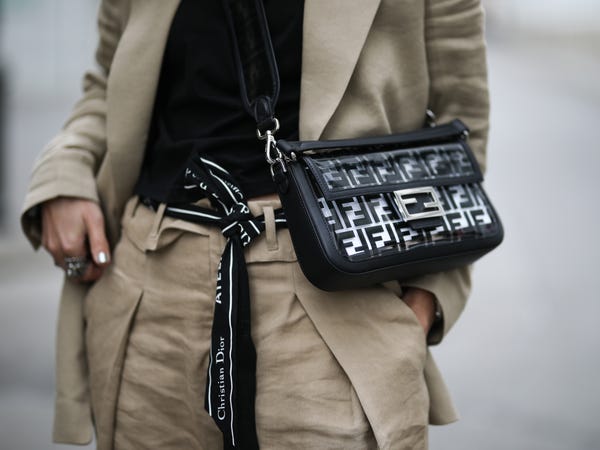 Most recognizable for: Fendi is a luxury brand, best known for its signature "F" print. The brand recently launched a collection with rapper Nicki Minaj.

Fresh: This brand was launched in Boston in 1991 and is known for its natural product line. 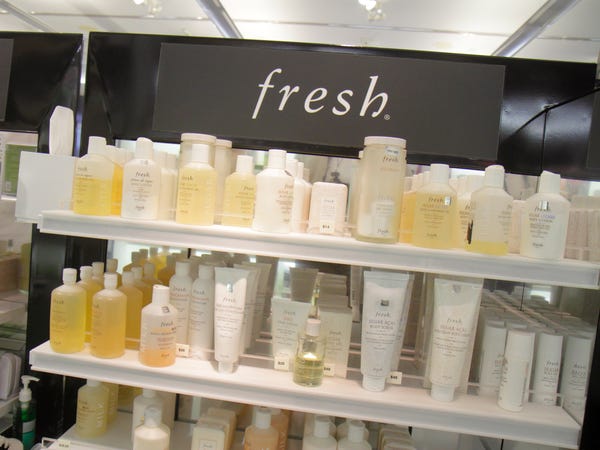 Most recognizable for: Fresh is known for its expansive collection of natural products. It is sold in Sephora.

Bulgari: The famous jewelry brand, founded in 1884, sold to LVMH for $6.01 billion in an all-share deal. The Fashion Law reports that the Bulgari family sold their 50.4% controlling stake in their namesake brand for 3% of LVMH. 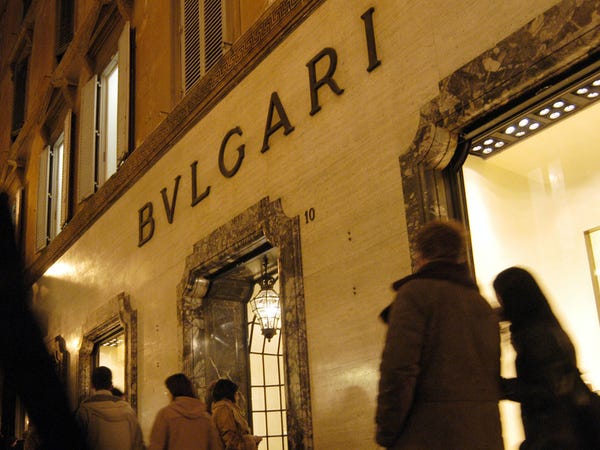 Most recognizable for: Luxury jewelry brand Bulgari is known for its watches and diamond necklaces.

Kat Von D Beauty: This cosmetics line was launched in 2008 and is named after its namesake founder, tattoo artist and model Kat Von D. It is owned by KENDO, the beauty incubator owned by LVMH. 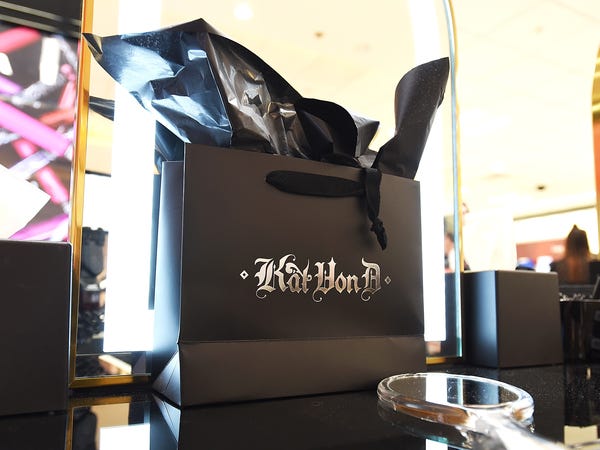 Most recognizable for: Kat Von D Beauty was founded by tattoo artist Kat von D. The brand is known for its eyeshadow palettes.

Le Parisien: According to LVMH's website, this newspaper was founded in 1944, and is read by nearly 18 million people each month. Reuters reports that LVMH offered to buy Le Parisien, and its sister paper Aujourd'hui en France, for $54.38 million in 2015. 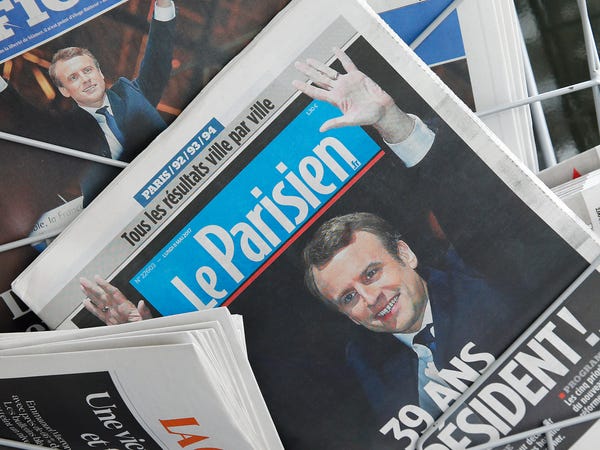 Most recognizable for: Le Parisien is one of the most notable tabloids in France, along with Le Figaro and Le Liberation.

Rimowa: Founded in 1989, LVMH obtained an 80% stake in Rimowa for roughly $700 million. The company is now run by Alexandre Arnault, son of LVMH's CEO, Bernard Arnault. 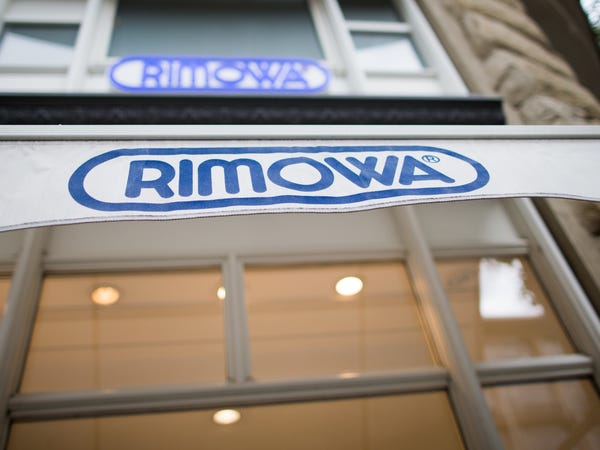 Most recognizable for: Rimowa is a luggage company. The brand made headlines after launching a collection of luggage with the brand Supreme in December 2018. 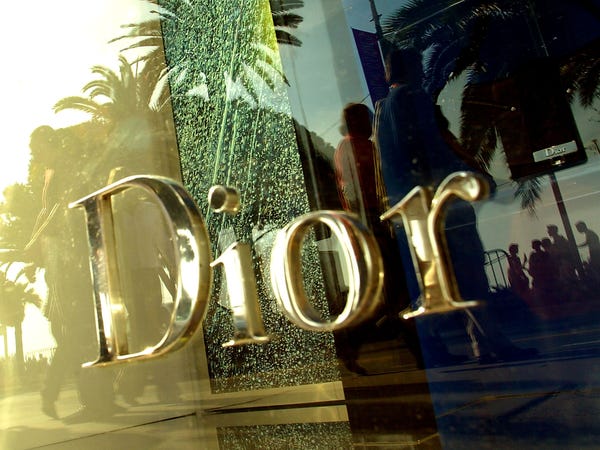 Most recognizable for: Dior is a luxury brand, best known for its gowns and handbags. Celebrities such as Rihanna and Jennifer Lawrence are noted faces of the brand.

Fenty Beauty by Rihanna & Fenty: In a deal with one of the biggest pop stars on the planet, LVMH's launch of the Fenty Brands made Rihanna the first woman of color to launch a label with LVMH, and the first woman to have an original brand with the luxury conglomerate. 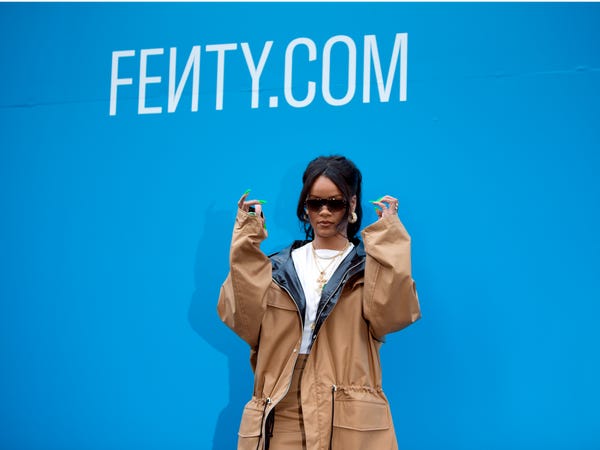 Most recognizable for: In 2017, Fenty Beauty by Rihanna launched a 40-shade range of foundations, which helped to revolutionize diversity in the beauty industry.  The shade range has since expanded to 50 shades.