Locked-down Aussies have been shifting their spending away from overseas holidays and into electronics and home equipment, according to booming sales forecasts from two of the nation's biggest retailers.

On Monday JB Hi-Fi revealed it expected a bumper profit result for the first half of 2021, with online sales jumping 161 per cent to $678.8 million in the six months to December. Meanwhile, owner of the BCF and Super Cheap Auto brands, Super Retail Group, reported online sales up 87 per cent as Australians rushed to buy exercise and camping gear. 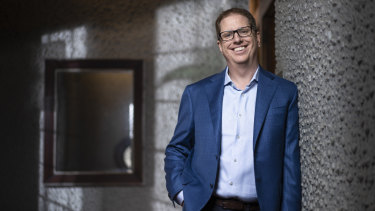 JB Hi-Fi chief executive Richard Murray said the company was pleased to report strong results after what he described as an “extraordinary period”.Credit:Eamon Gallagher

Super Retail Group chief executive Anthony Heraghty said it was an "encouraging sign" that even against a backdrop of economic uncertainty, sales were growing.

In the face of lockdown and border closures customers were investing in activities they are still able to enjoy, including camping, exercise and DIY projects.

"All the camping categories performed very strongly. And you don't just buy a tent, there are a number of other things you have to buy to make that all work," Mr Heraghty said.

At the company's sports retailer Rebel, like-for-likes sales jumped 17 per cent in the six months to December, while the number of customers buying their sporting goods online increased by 102 per cent.

Mr Heraghty said the pandemic had shown clearly that "online [retail] is no longer just a side project, it's the main game". 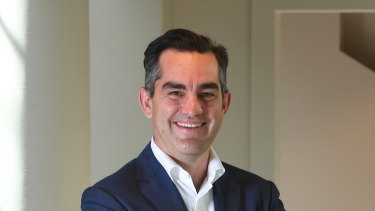 JB Hi-Fi chief executive Richard Murray said shoppers appeared to be more "mission focused" in the age of COVID-19, and the ongoing trend towards work-from-home would help sustain the company's sales.

"I think more people will say 'I want to basically duplicate my office environment at home,'" he said.

Solomon Lew's Premier Investments, which operates the Smiggle and Peter Alexander brands, hit record share price highs last week when it also revealed an uptick in online sales. will push its earnings 85 per cent higher over the past six months.

Chief executive of the Australian Retailers Association, Paul Zahra, said strong trading updates were encouraging, but warned coronavirus was set to impact retails for some time.

"Australian households have a lot to be positive about especially when they see images of how Covid has devastated other countries around the world and this is having a positive impact on consumer confidence," Mr Zahra said.

"Even with a vaccine in place, we are likely to live with the virus for some time – albeit at a reduced level, so some of the existing challenges will remain."