In media news today, ABC News says Krysten Sinema has ‘taken a hard turn to the right,’ Ben & Jerry’s co-founders are stumped on why they refuse to sell ice cream in Israel but do business in red states, and Samantha Bee admits she didn’t want to attack Andrew Cuomo last year

The media was in an uproar Tuesday after Texas Gov. Greg Abbott, R., issued an executive order banning “any entity” in the state from enforcing a COVID-19 vaccine mandate.

“The COVID-19 vaccine is safe, effective, and our best defense against the virus, but should remain voluntary and never forced,” Abbott said in a press release Monday.

The executive order prohibits any entity in the state from compelling an individual to receive a COVID-19 vaccine “who objects to such vaccination for any reason of personal conscience.” The bill, he said, would supersede any conflicting order by local jurisdictions. Florida Gov. Ron DeSantis, R., has issued similar orders in recent weeks, including a ban on mask mandates in schools.

“Abbott’s order is manifestly political, a sop to the far-right-wing Republican base in his state,” Hiltzik wrote. “But its impact can’t be minimized. The order puts many employers, including nursing homes and other healthcare facilities, in a huge bind. That’s because many are subject to federal regulations requiring that all employees be immunized against COVID-19.”

He was one of several critics to make the conclusion that Abbott was putting politics over people’s lives.

“Republican elected leaders fear the wrath of the GOP primary electorate more than they fear thousands of residents of their states dying of COVID-19,” The Atlantic tweeted, resurfacing a column from Adam Serwer published over the summer titled, “Greg Abbott Surrenders to the Coronavirus.”

The co-hosts of “The View” were equally disgusted as they made the same point. Guest host Sherri Shepherd accused Abbott of “pandering to Trump” while “people are dying.”

CNN added to the pile-on, publishing a Chris Cillizza piece with the headline, “Someone needs to remind Greg Abbott he is a conservative.” 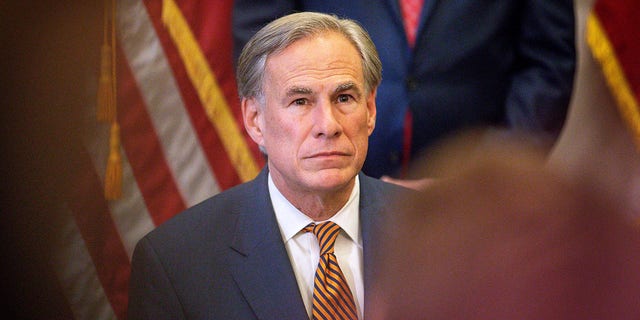 AUSTIN, TX – JUNE 08: Texas Governor Greg Abbott attends a press conference where he signed Senate Bills 2 and 3 at the Capitol on June 8, 2021 in Austin, Texas. Governor Abbott signed the bills into law to reform the Electric Reliability Council of Texas and weatherize and improve the reliability of the state’s power grid. The bill signing comes months after a disastrous February winter storm that caused widespread power outages and left dozens of Texans dead. (Photo by Montinique Monroe/Getty Images)

“Abbott telling private companies what to do is, literally, the exact opposite of that governing philosophy, right? Right!” Cillizza wrote. “How did we get to this point? And how can Abbott justify what would be seen as a massive government overreach if a Democratic governor had done it?”

Abbott criticized President Biden for enforcing a mandate in September forcing employers with more than 100 workers to require the vaccine or submit weekly testing, calling it “federal government overreach.”

“Our intention is to implement, and continue to work to implement, these requirements across the country, including in the states where there are attempts to oppose them,” she said.

Echoing the media, Psaki added the actions taken by Abbott and DeSantis fit a pattern of their “putting politics ahead of public health.”

Both Abbott and DeSantis have themselves received the coronavirus vaccine. When Abbott got the shot last December, he told Texans it was “safe and easy” and that he’d “never ask a Texan to do something I’m not willing to do myself.” When he tested positive for the virus in August, mainstream media again lectured him for how he’s handled COVID-19 in the Lone Star State.

“There’s a lesson in all of this for Abbott — although he’s unlikely to see it due to his own political considerations,” Cillizza wrote at the time. “And that lesson goes like this: Masks work. So do other mitigation practices like social distancing and limiting large gatherings.”