Trump on Wednesday told Fox News that he’d turn off a game if he saw players following the lead of former San Francisco 49ers quarterback Colin Kaepernick who in 2016 began taking a knee during the national anthem before games in protest at systemic racism and police brutality.

“I think it’s disgraceful,” said Trump, who has long launched vitriolic attacks on athletes kneeling to call for institutional change.

James was asked about Trump’s comments following his Los Angeles Lakers side’s loss to the Oklahoma City Thunder on Wednesday at the NBA’s bubble in Florida. James and other players took a knee before the game: 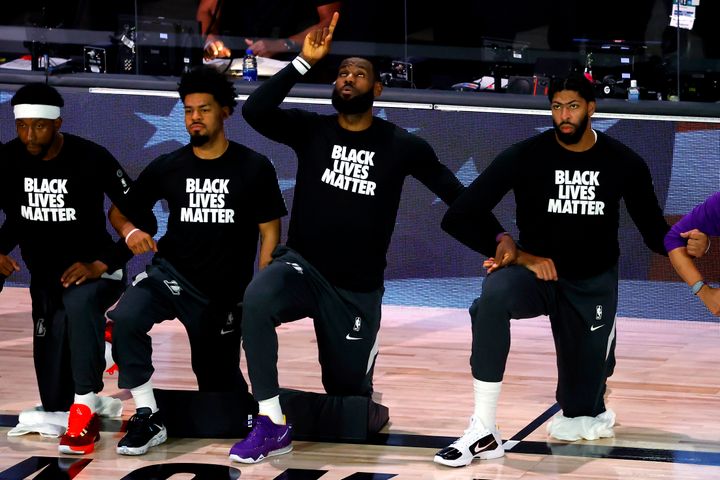 “I really don’t think the basketball community are sad about losing his viewership,” James responded to a reporter.

James initially claimed he wouldn’t “get into it” because “I already know where this could go.” But he delivered a pointed dig at Trump later in the interview when calling out the leadership in the U.S. and said the 2020 election was “a big moment for us as Americans” and “an opportunity” for change.

“The game will go on without his eyes on it,” James added. “I can sit here and speak for all of us that love the game of basketball. We could care less.”

James has traded barbs with Trump before, most notably in 2018 when the president attacked him over an interview he gave to CNN’s Don Lemon.

In the sit-down, James accused Trump of enabling racists and of using sports “to kinda divide us.”

Trump hit back on Twitter, questioning the intelligence of both men.