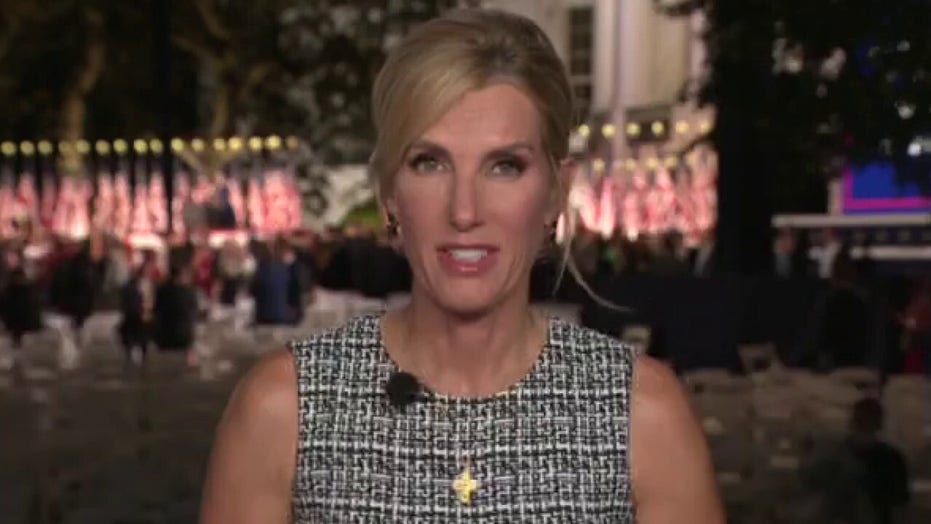 The president knows that Democrats are taking on political water.

President Trump rebuffed Joe Biden's attempts to brand him as responsible for violence in cities across America in an "incredible and electric" speech at the Republican National Convention, Laura Ingraham said Thursday.

"If you have any doubt in your mind what is at stake and who can keep America our country that we love safe and on the road to greater prosperity, Donald Trump just reminded you," the "Ingraham Angle" host said.

"The president knows the Democrats are taking on political water after months excusing these riotous events. They called them protests for the longest period of time, but they [transformed] into massive looting that did enormous destruction in some of our most beautiful cities. He took their pathetic and transparent attempt to shift the blame and he took that on tonight."

In his remarks, Trump said the GOP condemns "in the strongest possible terms", the looting, arson and violence that has cropped up from Portland to New York City and slammed Biden and the Democrats for neglecting to mention the issue during their convention last week.

"Now they're starting to mention it because their poll numbers are going down like a rock in water," Trump remarked.

"They had an entire convention last week," Ingraham emphasized. "They didn't mention the violence once, [but] blandly referred to protests and the courageous protesters. The attempt to lay the destruction in those cities at the feet of Donald Trump – he wasn't going to stand for that at all."

Ingraham said Trump rightfully dismissed Biden's claim during an MSNBC interview earlier Thursday that the violence is taking place in "Donald Trump's America" by pointing out that the worst of the unrest has taken place in cities run by Democrats.

"Are these the leaders that we want to turn the keys of the country over to?" Ingraham asked. "They're all voting for Biden … the ones who engage in this disgusting political calculation.

"They're putting partisan interests above the safety of our people. Trump doesn't need political winds to push him in the right position. He's always been there."