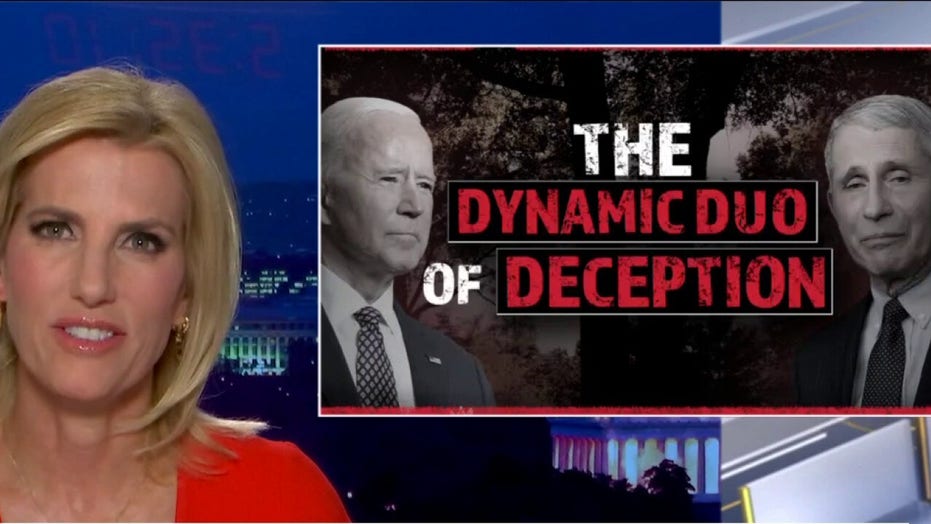 Ingraham: Fauci and Biden ‘the dynamic duo of deception’

“Every day we wake up, and it seems another Constitutional right is under threat,” Fox News host Laura Ingraham said Friday, adding that many Americans can’t help but feel “like we are losing the nation we love.”

According to “The Ingraham Angle” host, more Americans are self-censorsing “because they’re afraid of the consequences … That’s not the country any of us grew up in.”

During this crisis, Ingraham claimed, those who have power over Americans are lying to them in order to keep them weak, fearful and dependent on the government.

“Their goal,” she stated, “Is to get you to accept a lower standard of living and fewer freedoms.”

Against this backdrop, President Biden delivered a prime-time address on Thursday that commemorated the anniversary of the coronavirus pandemic, a speech that Ingraham called “uninspiring”, “negative” and “filled with half-truths and just plain untruths.”

The host took particular exception to the messaing from the president and chief medical adviser Dr. Anthony Fauci, a pair Ingraham deemed, “The Diabolical Duo.” She then panned Biden’s claim that Americans would be able to gather in small groups over the summer and celebrate Independence Day on the current pace of vaccination.

“Fifteen months into the pandemic, and all you get is a hot dog with like three of your neighbors,” Ingraham said. “That’s what Biden’s big gift to you is. Where in the First Amendment does it give the president the power to decide when and with whom you can barbeque? Where is it in the Constitution, I should say?

“I still haven’t found the ‘all rights are suspended during a pandemic’ clause in Article II.”

Ingraham concluded by answering viewers who wondered whether the lies of those in power would become accepted truths. She referenced author John Steinbeck, who wrote in his novel “East of Eden”: “Most liars are tripped up either because they forget what they have told or because the lie is suddenly faced with an incontrovertible truth.”

“Incontrovertible truths are finally beginning to catch up to Biden and Fauci,” Ingraham said. “We know the truth now about lockdowns, and that red state governors were right to open up early on.  We know that the W.H.O. is a co-conspirator in China’s COVID cover-up.

“And we also know, virus or no virus, that the government has no power to take away our inalienable rights.”