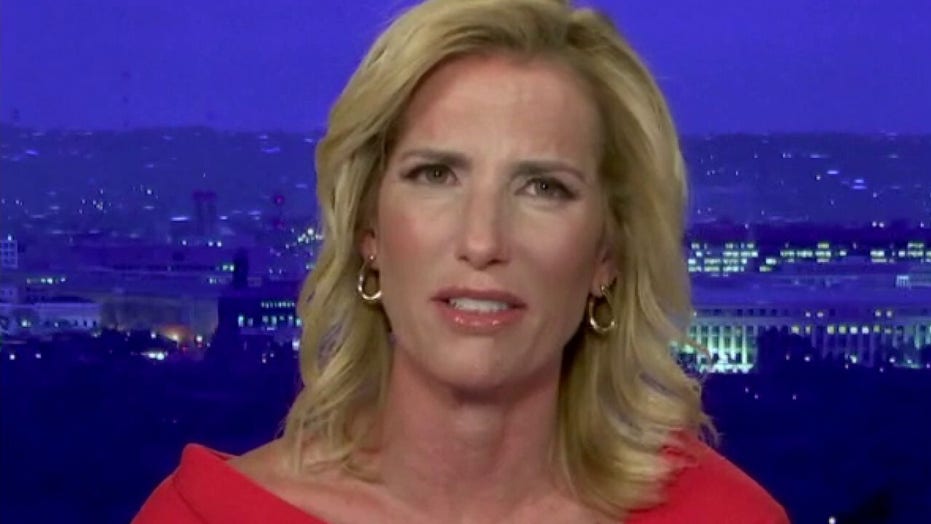 Teachers unions turn their back on kids.

The American Federation of Teachers and the National Education Association are two of the most powerful forces in America — but their recent pursuits may be wearing thin with parents and students, Laura Ingraham said Thursday.

Teachers unions are using the coronavirus pandemic to push online-only learning — and shutter brick-and-mortar schooling for an unknown period of time, the host of Fox News' "The Ingraham Angle" said.

"The NEA and AFT are powerful forces, but they only remain so, I think, if Americans continue to believe that public education is still worthwhile," Ingraham said.

"By refusing to teach, by politicizing curricula, by jeopardizing our childrens' mental and physical well-being, they are showing us how nonessential they are becoming.

"But one gets the sense the virus fearmongering is beginning to wear thin. More families see the need to move on to preserve what we have while still protecting the most vulnerable. Even The New York Times seems to think the unions have maybe overstepped and risk alienating millions of voters."

"Even The New York Times seems to think the unions have maybe overstepped and risk alienating millions of voters."

Pediatricians have stated how important the classroom experience is to children's well-being while online learning further widens the class divide in the country, Ingraham said.

Ingraham said that while wealthy families will be able to hire tutors and sitters or simply "take up new hobbies" while their kids go to school in cyberspace, long-term online learning will cause mayhem for lower-class parents trying to hold down jobs and balance the scheduling and educational needs of their children.

"Pretty much every pediatric specialist that I have seen believes this '100 percent distance learning' approach is a total disaster. It is terrible for all children and all parents, but especially for at-risk kids from single-parent families," she said.

"How can Democrats endorse keeping kids at home full-time when the virus poses a minuscule threat to young Americans? After all, daycare centers for essential workers never shut down and grocery store employees, they show up every day to work — as do bus drivers and nurses. So why do educators get a special stay-at-home pass?"

"How can Democrats endorse keeping kids at home full-time when the virus poses a minuscule threat to young Americans?"

She pointed to claims from top Democrats that online learning is meant to protect the health of children, playing video of House Speaker Nancy Pelosi of California, Sen. Debbie Stabenow of Michigan and former Vice President Joe Biden of Delaware.

"From California to Michigan, you see a pre-election momentum beginning to build to either pause or reverse reopening. Today, Maryland's liberal Republican Gov. Larry Hogan cited cases in other states to justify halting his own state's reopening," she said.

"Lockdowns plus trillions in welfare spending — until apparently there is zero virus in America – That is realistic," she continued. "Remember the justification for stay-at-home orders was the need to preserve the hospital system. I can kind of understand that. But now they are using these lockdowns or pauses to preserve Biden's chances to beat Trump. It is truly disgusting."

"They are using these lockdowns or pauses to preserve Biden’s chances to beat Trump. It is truly disgusting."

She pointed to several cases she considered questionable, including a report that teachers on the Hawaiian island of Lanai are "resisting fully reopening" despite the island reportedly having no net coronavirus cases.

"Now, thankfully President Trump wants the kids back in school. He has a solution for unions and [for those] school districts that do not put kids first," Ingraham said, pointing to comments the president made encouraging that education funds be given to parents if their public school won't reopen.