British wagering giant Entain has increased its bid for Tabcorp’s bookmaking and media division by half a billion dollars after the ASX-listed gambling group rebuffed an earlier offer of $3 billion.

Tabcorp said in a statement on Tuesday morning that it had not yet formed a view on the merits of the new $3.5 billion offer from Entain, which owns the rival online bookies Ladbrokes and Neds. 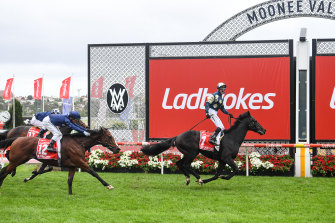 Ladbrokes owner Entain has increased its bid for Tabcorp’s wagering and media division to $3.5 billion. Credit:Getty

However market and industry sources believe Tabcorp wants at least $3.5 billion for its struggling wagering and media arm, which Entain has now matched.

Tabcorp rejected Entain’s first bid, which lobbed in early February, as too low but has since launched a strategic review into the future of its wagering business to consider whether it should look to sell the unit or demerge it from its booming lotteries business.

Tabcorp said on Tuesday that it would asses the new bid “in the context of the previously announced strategic review”.

“As stated, the objective of the strategic review is to assess and evaluate all structural and ownership options to maximise the value of Tabcorp’s businesses for the benefit of shareholders,” the company said.

Private equity group Apollo and media heir Lachlan Murdoch have also expressed interest in Tabcorp’s TAB wagering division, which remains the largest bookie in the country but has been losing ground to online rivals such as Sportsbet and Ladbrokes for over a decade.