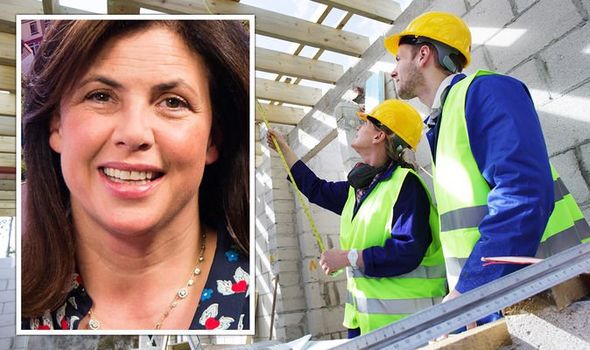 Mr Sharma, who hosted the COP26 climate summit hosted by the UK this year, said the planet is in danger of running out of time to stop the more serious effects of climate change.

More frequent floods, fires and heatwaves have already been witnessed around the world in recent years.

Mr Sharma told The Observer: “We can’t afford to wait two years, five years, 10 years – this is the moment.”

The COP26 president was criticised by some Britons for visiting 30 countries since February.

However, Kirstie claimed anyone who criticises Mr Sharma “is an idiot”.

She said: “Anyone who thinks @AlokSharma_RDG shouldn’t be flying 10 times around the world, in order to get eyeball to eyeball with as many people as possible in the run up to #COP26, is an idiot who has completely failed to realise how serious the climate crisis is.”

“That said, why not put a limit on house sizes, if carbon footprint so important.”

Kirstie said there’s “no need for aircon” in the UK.

She replied: “No, I don’t, no need for aircon in the UK, build better and greener.”

The study, which was conducted in over 60,000 UK homes in the summer of 2021, found that a UK home with an indoor temperature of 20C and an outside temperature of 30C in sunny weather gains on average 5C after three hours.

UK homes are actually gaining heat more than twice as fast as Western European homes like Germany and Italy.

In a heatwave, it’s likely that Britain will suffer more than their European neighbours.

UK housing stock is the oldest in Europe which means British homes often struggle to maintain desired temperatures in the cold and warmer weather.

A whopping 38 percent of UK homes date back to before 1946, compared to 24 percent for Germany and Sweden.

Co-founder & CPO Christian Deilmann of tado° said: “Our study shows the degree to how homes react to outdoor temperatures and solar radiation.

Air conditioning can help to reduce heat in the home but it comes with both financial and environmental costs.

Aircon can increase electricity costs and also emit pollutants into the air.

Kirstie and Phil’s Love It or List It airs tonight at 8pm on Channel 4.