More AFL games outside Victoria would be shown live exclusively on Foxtel and on a delay of up to two hours on Channel Seven under a proposal being reviewed by the league’s governing body as talks over a $1 billion-plus media rights deal enter the home stretch.

Media sources who spoke on the condition of anonymity because talks are confidential said the AFL was considering delaying two free-to-air matches each week by up to two hours in interstate markets to give Foxtel more exclusivity for its streaming service Kayo Sports.

However, Seven is fiercely opposing the suggestion on the grounds it would hurt fans and significantly reduce the value of its own rights. 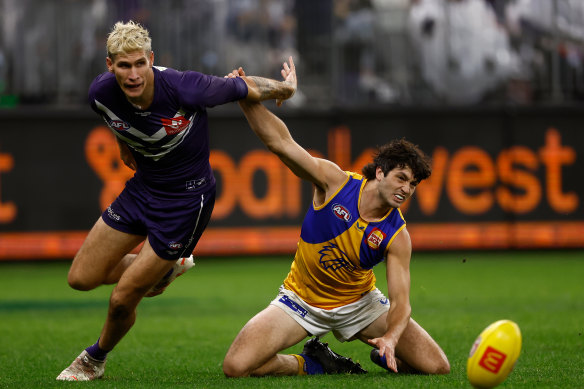 This season, six matches aired on Seven on delay in Western Australia and South Australia, but all matches in Queensland, NSW and Victoria are broadcast live on Seven. Under plans being considered by the AFL, more matches would air on free-to-air each week (four) – but two of these games would be delayed by up to two hours in markets outside Victoria.

This means NSW, Queensland, South Australia and Western Australia could face a 30 per cent to 40 per cent reduction in live matches on free-to-air television, a move that would be fiercely opposed by clubs and state governments who want local games to be broadcast exclusively and free-to-air.

The AFL has what the industry describes as a “flip-flop clause” in its contract, which expires in 2024. It is a clause unique to the AFL and gives Seven the ability to broadcast a local team on free-to-air television in its respective state. Any decision to delay matches would effectively defeat the purpose of the clause.

Seven West Media and Foxtel both declined to comment.

The proposal comes after Foxtel last week backed down and let Seven stream the games it broadcasts on free-to-air on its online service, 7Plus. Foxtel and Seven, the AFL’s incumbent broadcast partners, have been at loggerheads for weeks over key aspects of the league’s next deal, including exclusivity and scheduling of matches. But both parties, which are negotiating separately with the AFL for legal reasons, are hopeful the renewal of their deals will be secured imminently.

The AFL is in final stages of talks over its next broadcast rights deal. Media sources last week said the league was still in discussions with other bidders including Nine Entertainment Co (owner of this masthead) and Paramount, the owner of Network Ten.

The Age last week reported that Foxtel had agreed to let Channel Seven stream key AFL matches online, in a final attempt to knock rival bidders out of negotiations.

Seven, controlled by West Australian billionaire Kerry Stokes, lacks the right to show the games it broadcasts on free-to-air on its streaming app 7Plus (the games are available on Foxtel’s online streaming service, Kayo Sports).

Senior executives at Foxtel were frustrated by the AFL’s decision to grant Seven its wish, even though it is expected to receive a “Super Saturday” in exchange. A Super Saturday would give Foxtel the exclusive rights to home-and-away rounds broadcast on that day.

Foxtel wants more exclusive content in return for paying millions more to the AFL each year. News Corp is already contributing most of the $946 million that the AFL receives in broadcast fees.

But none of this will occur if Seven and the AFL, and Foxtel and the AFL, do not come to an agreement on how the games should be split. Foxtel needed to make the concession on streaming as it is the only bidder in contention that does not own a free-to-air network. Seven is also facing pressure from the AFL to make concessions to Foxtel because it does not have a paywalled streaming product.

The other two bidders, Nine Entertainment Co, which owns The Age and The Sydney Morning Herald as well as streaming platform Stan, and Paramount, which owns Channel Ten, both own free-to-air and pay TV assets and do not need to work with any other partner.