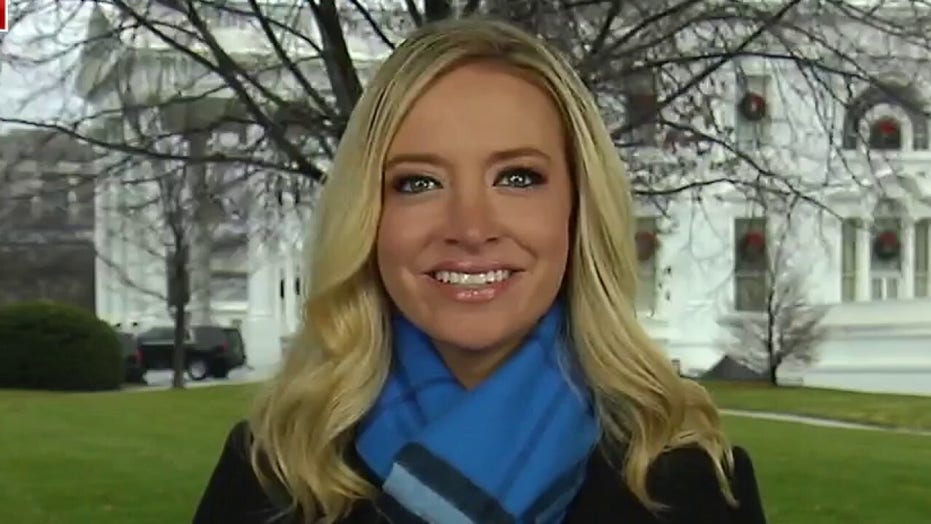 “In the last 24, 48 hours there have been quite a few stories that have not gotten a ton of coverage in the mainstream media, as former White House press secretary Ari Fleischer said, ‘Bias is often found in the stories the press does not cover,'” McEnany said before citing recent examples.

Early last week, Axios published a bombshell report that a woman named Fang Fang, aka Christine Fang, forged ties with Swalwell while he was a city council member in Dublin, Calif.

According to the report, Fang helped fundraise for Swalwell's 2014 reelection campaign and placed an intern in his office. Fang reportedly forged other ties with Democratic politicians, even engaging in sexual relations with at least two Midwestern mayors.

“We found out that Democrat Congressman Eric Swalwell was infiltrated by an alleged Chinese spy, this spy cozied up to Swalwell, raised funds for his 2014 campaign and even planted an intern in his office and that relationship continued until the FBI briefed him in 2015, and that was some very good reporting done by Axios,” she said.

“But after entangling with this spy for years, Swalwell hypocritically went on to be one of the lead instigators of the Russia collusion hoax and the impeachment sham.”

The New York Times, which won a Pulitzer Prize for its reporting on the Russia investigation that pushed the collusion narrative between the Trump campaign and the Kremlin, has yet to touch the Swalwell story, according to search results on the paper's website.

While McEnany noted that the Swalwell story has not been covered by The New York Times, the Gray Lady isn’t the only liberal outlet ignoring the news.

“When the Swalwell story broke, guess how many minutes of coverage it got on ABC, NBC, MSNBC and CBS? Zero. CNN devoted three minutes and 16 seconds to it,” McEnany said before pivoting to the media downplaying the ongoing Hunter Biden scandal.

“Which was not covered, at all, by many outlets in the lead up to the election. In fact, on Oct. 15 you had a New York Times headline that said, ‘Trump said to be warned that he was being given Russian disinformation over Hunter Biden,’” McEnany said. “Now, Dec. 10, just a few months later, New York Times headline, ‘Investigation of Hunter Biden is likely to hang over Biden as he takes office.’”

She noted a similar shift in headlines from the Washington Post and Politico, both of which dismissed the Hunter Biden story prior to Election Day.

“Good for those who covered what was a story all along,” McEnany said.

As McEnany left the podium following her criticism of the media, CNN’s far-left White House reporter Jim Acosta shouted, “Isn’t it hypocritical for you to accuse others of disinformation when you spread it every day?”

Acosta, who has emerged as a hero of the anti-Trump resistance for his snarky and combative approach to questioning the Trump administration, was seemingly proud of his latest outburst because he tweeted multiple clips of the comment within minutes of the briefing’s conclusion.