A Delaware judge has denied a request by former McDonald’s CEO Stephen Easterbrook to dismiss a lawsuit the company filed against him after he was ousted over an inappropriate relationship with an employee.

McDonald’s forced out Easterbrook in November 2019. The company then filed a lawsuit last year seeking to reclaim millions of dollars in compensation paid to him, alleging that he had covered up sexual relationships with three other employees and destroyed evidence.

The judge on Tuesday rejected Easterbrook’s arguments that the lawsuit should be dismissed because the company had agreed that any disputes over his compensation, including severance compensation, would be litigated in Illinois, where McDonald’s is headquartered. 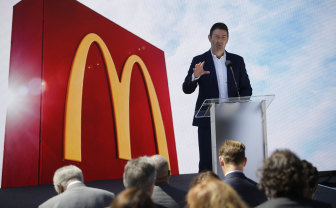 The fight over Easterbrook’s compensation has become one of the highest-profile examples of a corporation grappling with the #MeToo era.Credit:Bloomberg

Easterbrook also argued that the claims against him in the lawsuit were barred by the terms of the separation agreement.

Vice Chancellor Joseph Slights III said the mandatory forum selection clauses Easterbrook invoked in arguing that the Delaware court did not have jurisdiction were not incorporated into the separation agreement and there was no other basis to imply that McDonald’s could not sue in Delaware.

Slights also said the language in the separation agreement was not so broad that it would deny McDonald’s the right to hold its former CEO and board member accountable for breach of fiduciary duty and fraud.

“The company has pled a reasonably conceivable basis upon which the court, as fact-finder, could conclude that McDonald’s reasonably relied upon Easterbrook’s alleged ‘falsehoods’ in a manner that caused it harm,” Slights wrote.

According to the lawsuit, McDonald’s parted ways with Easterbrook after he acknowledged exchanging provocative videos and text messages in a “non-physical, consensual” relationship with a female employee. Easterbrook told the company that there were no other similar instances, and an initial search of his mobile phone confirmed that assertion.

McDonald’s initially considered firing Easterbrook “with cause” for violating the company’s standards of conduct, which would have denied him any severance benefits. It opted instead to negotiate a voluntary separation agreement terminating his employment “without cause,” which provided him with substantial severance compensation.

McDonald’s then received an anonymous tip in July 2020 that Easterbrook had engaged in a sexual relationship with another female employee, according to the lawsuit. An internal investigation uncovered photographic evidence of that relationship, as well as sexual relationships with two other employees in the year before his termination. McDonald’s also alleged that Easterbrook had approved a special grant of restricted stock, worth hundreds of thousands of dollars, to one of those women.

The lawsuit alleges that Easterbrook breached his fiduciary duties and violated the company’ standards of business conduct in pursuing sexual relationships with employees and making decisions about compensation for an employee with whom he was having sex to further his own interests. It also claims Easterbrook fraudulently induced the company to enter into the separation agreement by concealing the extent of his wrongdoing.