“The media was wrong in its abuse of this kid. Terribly wrong. Yet, media figures continue to attack him for somehow causing this controversy,” Turley wrote in a piece headlined, “Did CNN’s Stelter shatter the Sandmann confidentiality agreement?”

Sandmann was famously swept up in a controversy after a video clip depicted the "MAGA" hat-wearing student smiling at Nathan Phillips beating a drum and singing a chant as he was surrounded by Sandmann's peers, who all had joined in on the chant in front of the steps of the Lincoln Memorial in Washington D.C.

Several mainstream media outlets, including CNN, portrayed the incident with Sandmann and the other teens as being racially charged before additional footage later showed that a group of Black Hebrew Israelites had provoked the confrontation, slinging racial slurs at the students as they were waiting for their bus following the March For Life event. The footage then showed Phillips, who was in town for the Indigenous Peoples March, approaching the students amid the rising tension between the two groups.

CNN settled with the teenager back in January, but Sandmann’s attorney, Lin Wood, on Monday spotted retweets from Stelter of a tweet written by attorney Mark Zaid, who speculated about how much money the teen walked away with from the settlement. CNN analyst Asha Rangappa also chimed in.

“CNN’s chief media correspondent Brian Stelter and its legal analyst Asha Rangappa have commented on the settlement — dismissing it as involving just a small payment to end a nuisance lawsuit. Sandmann’s counsel Lin Wood has cried foul that this is a violation of the confidentiality terms which bar public comments on the agreement,” Turley explained.

“Yet, Stelter and Rangappa are put on the air to discuss public controversies. These agreements are designed particularly to prevent comments to the media, but what if the party is the media? This is a major public controversy,” Turley added. “The question is whether analysts discussing a news story is the same as CNN as an entity discussing terms of the agreement or disparaging the settlement. Wood clearly believes so.”

Turley found it “astonishing and frankly disgraceful” that Stelter and other media members would “continue to downplay what happened to this 16-year-old boy in false accounts that ran nationally on his encounter.” 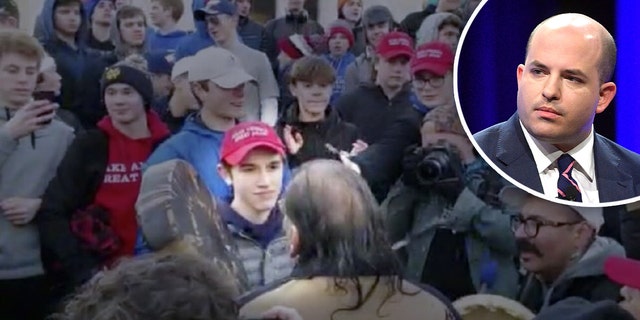 Turley then examined the legal aspects and whether Stelter will find himself in hot water over his retweet. The professor explained that it all comes down to the language of the settlement agreement, which is confidential.

“CNN’s lawyers obviously knew that this would be a newsworthy story so they had a choice of allowing their employees to discuss the settlement or barring such comments. If they did the latter, the attorneys would ordinarily send around a memo informing all employees that they are not to comment on the settlement or go beyond an approved statement,” Turley wrote.

“The attorneys for CNN may be the most miffed. Media lawyers are often the ones pushing for confidentiality because they do not want to encourage future lawsuits by stories of settlement payments. If these CNN employees are covered in the agreement, it could permit the filing of a new action for breach and a demand for damages,” Turley added. “This could prove a couple of costly tweets for the company.”