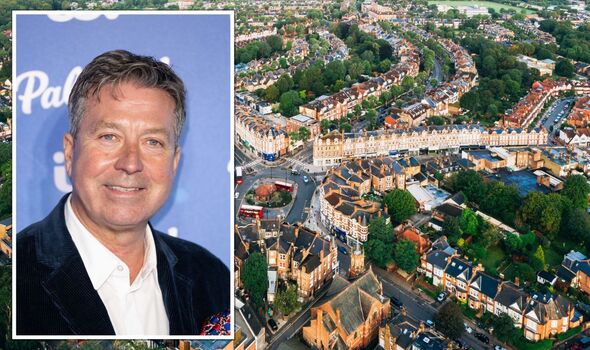 Australian-British chef John Torode is best known for his role on the TV series, MasterChef alongside Gregg Wallace. The talented chef began his career on ITV’s This Morning from 1996 to 2000, and now has several published cookbooks. He has also appeared on several TV shows including The One Show, Loose Women and The Graham Norton Show. But where in North London does he call home?

Born in Melbourne, the TV chef is believed to now reside with his wife Lisa Faulkner in Muswell Hill, according to an interview John had with RadioTimes.com.

Located in North London, Muswell Hill is a vibrant neighbourhood with much to love: tons of restaurants, great shops, and excellent schools.

On Sundays, residents pick up organic fruit and veg and locally sourced meat at one of London’s biggest farmers’ markets, in Alexandra Park from 10am to 3pm.

Although Muswell Hill is a popular place for central London commuters, it doesn’t have its own Tube or Overground station.

However, there are several stations within walking distance, or just a bus ride away. Highgate and East Finchley are on the Northern Line, and Bounds Green, Finsbury Park and Wood Green are on the Piccadilly Line.

You might think that not having its own tube stop or train station would put people off – but it only adds to the area’s charm.

This welcome isolation has helped mould its village-like London suburb appeal, where residents can sidestep the disadvantages of family life in the capital without leaving.

Arguably one of the greenest spots in North London, Muswell is surrounded by woodland and recreation grounds; perfect for dog-walking, taking long strolls or indulging in a scenic picnic.

The first choice for many of Muswell Hill’s residents is Alexandra Park, with its 196 acres of vast green space of beautiful parkland and boasts famous city views, alongside a boating lake, pitch and putt course, rose garden and even a deer enclosure.

The park is also home to Alexandra Palace, an important historical venue that now hosts concerts, conventions and events, such as the Darts World Championships. In winter, a visit to the ice rink is an annual ritual for locals, as is the Bonfire Night fireworks display.

Housing here isn’t cheap since this is a desirable place to live – this is reflected in the average property price for this area.

According to Rightmove, properties in Muswell Hill had an overall average house price of £994,667 over the last year.

Houses in Muswell Hill are predominantly Edwardian, although there are a few Victorian homes and some 1920s and 1930s properties, many of these boasting gardens.

Because of the current high demand for family homes, properties that once were converted into flats are now being restored to their former glory as single family dwellings.

The most expensive property currently listed on Rightmove in this town is a five bedroom house, with a guide price of £3,200,000.

According to the listing, the property is a “charming” home, with an “impressive” landscaped garden. The property is situated close to the heart of Mussel Hill too. The property is on Queens Avenue, which is moments from the open spaces of Alexandra Park.

The lowest priced property is currently a brand new “award winning” one bedroom flat on sale with a guide price of £105,625, located in the very sought after area of Muswell Hill.