Joe Biden and California Sen. Kamala Harris appeared together for the first time as a joint Democratic ticket Wednesday in Wilmington, Delaware, with a clear general election message: President Donald Trump is a purveyor of crisis.

“America is crying out for leadership, yet we have a president who cares more about himself than the people who elected him,” Harris said after being introduced by Biden. “A president who is making every challenge we face even more difficult to solve.”

The event, held in a high school gymnasium, was only attended by press and staff, as well as Biden’s and Harris’ spouses, Dr. Jill Biden and Doug Emhoff, due to social distancing protocols during the pandemic. Speeches that would typically be met with big fanfare and applause were delivered in a silent room, and livestreamed to a virtual audience. Biden and Harris did not shake hands and for the most part stayed more than six feet apart.

Biden announced Harris as his running mate Tuesday, after a drawn-out vetting process that included several women of color and prominent lawmakers, like Stacey Abrams, Rep. Karen Bass (D-Calif.) and Sens. Tammy Duckworth (D-Ill.) and Elizabeth Warren (D-Mass.). Biden pledged to pick a woman as his running mate in March. The Democratic Party is holding its convention, virtually, to formally nominate Biden and Harris as their ticket for the White House next week.

Harris, 55, who is the second Black woman to ever serve in the United States Senate, is the first Black and South Asian woman selected for a national ticket as well as the first person from west of Texas to be on a national Democratic ticket. If elected she would also be the first woman to hold the position. 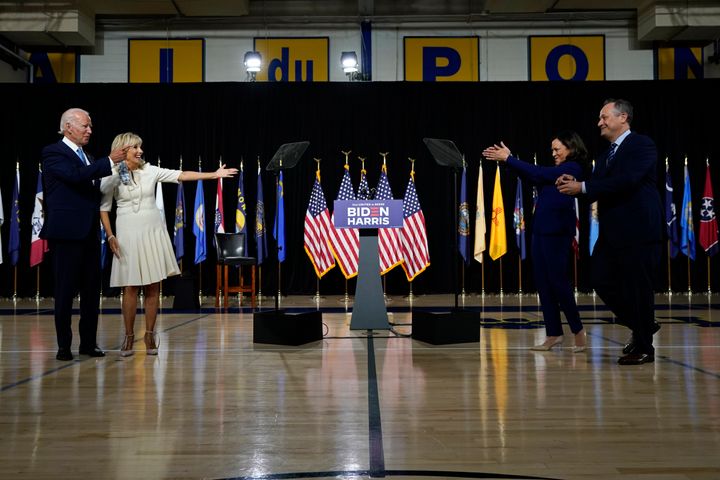 Biden emphasized the historic position Harris is in during his remarks.

“This morning all across the nation little girls woke up, especially little Black and Brown girls, who so often may feel overlooked and undervalued in their communities, but today just maybe they are seeing themselves for the first time in a new way: as the stuffs of president and vice president,” Biden said.

But much of both Biden’s and Harris’ remarks Wednesday were focused on Trump, emphasizing the public health, economic and social justice crisis the country is in.

“Instead of doing the hard work, of meeting face to face with congressional leaders, Democrats and Republicans in the White House like every other president has done in a crisis to get Americans the relief they need and deserve, Trump is on the golf course,” Biden said in reference to the stalled coronavirus relief negotiations between congressional Democrats and the White House. “If I told you this three years ago, you’d look at me like I was crazy.”

Biden also reminded the room that Wednesday was the third anniversary of the “Unite The Right” Rally in Charlottesville, Virginia — an event that inspired his bid for the White House and his rallying cry to “restore the soul of the nation.”

“This is what happens when we elect a guy that isn’t up for the job,” Harris said of Trump, calling 2020 a moment of “real consequence for America.”

“He inherited the longest economic expansion in history from Barack Obama and Joe Biden, and then, like everything else he inherited, he ran it straight into the ground,” she continued.

“The president’s mismanagement of the pandemic has plunged us into the worst economic crisis since the great Depression and we are experiencing a moral reckoning with racism and systemic injustice that has brought a new coalition of conscience to the streets of our country demanding change,” Harris said.

In federal office, Harris, who was elected to the Senate in 2016, was known for her role in high-profile Senate hearings, specifically her questioning of former Attorney General Jeff Sessions, and Attorney General Bill Barr, which Biden referenced in his remarks Wednesday.

But as a presidential candidate, Harris’ positions often straddled the line between the left and center of the Democratic Party. She supported “Medicare For All” before running for president, and then moved away from the idea, opting for a hybrid private-public insurance proposal. She’s been seen as a strong immigrant rights advocate, in favor of using executive action to give undocumented residents a better chance toward citizenship, and adopted more progressive ideas on criminal justice reform, including ending cash bail and legalizing marijuana — policies she did not back as a prosecutor. 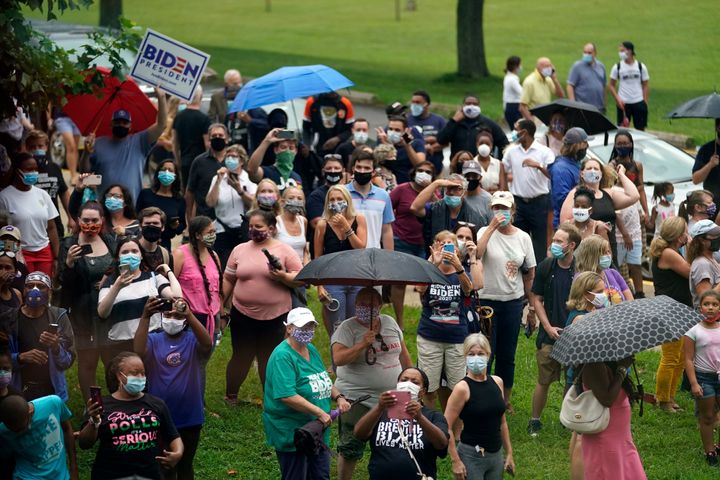 Criminal justice advocates have questioned just how progressive her record in law enforcement actually was. She was criticized for being too lenient in police shooting cases, turning a blind eye to certain wrongful convictions, pushing for higher cash bails for certain crimes and, as California’s attorney general, appealing a judge’s decision ruling the death penalty unconstitutional.

During the pandemic, she joined Sens. Bernie Sanders (I-Vt.) and Ed Markey (D-Mass.) to back a proposal that would give $2,000 monthly payments to millions of financially struggling Americans through the crisis — a proposal Biden’s campaign has not explicitly backed.

Arguably, Harris’ biggest moment in the Democratic presidential primary came at the expense of Biden; she took a shot at him on the debate stage for opposing a federally mandated busing program to racially integrate schools in the 1970s as a senator. But there hasn’t been any bad blood between the two of them as they presented a united front to defeat Trump.

Both Harris and Biden referred to the closeness of their families, particularly Harris’ past friendship and work with Biden’s revered son Beau, the former Delaware attorney general who died of brain cancer in 2015. Beau Biden and Harris worked together negotiating with banks during the 2011 and 2012 foreclosure crisis — a partnership that reportedly weighed heavily in Biden’s decision to pick Harris as his running mate.

Republicans and Trump backers have attacked Harris for being part of the “left-wing mob” and being “extreme,” and also for being a too-moderate pick for Biden that will fail to energize the progressive wing of the Democratic Party.