Rep. Jim Jordan, R-Ohio, shares his thoughts on the continued impeachment push and the Biden administration’s first actions in office.

Republican Rep. Jim Jordan is “considering” running for GOP Sen. Rob Portman’s seat, after the two-term senator from Ohio announced he would not seek reelection in 2022, Fox News has learned.

A source familiar told Fox News that Jordan, R-Ohio, is “considering it.”

But Jordan has yet to commit, saying he has not yet decided.

“We haven’t decided anything,” Jordan said on “The Ingraham Angle” Wednesday night, adding that he is focused on his work in the House. 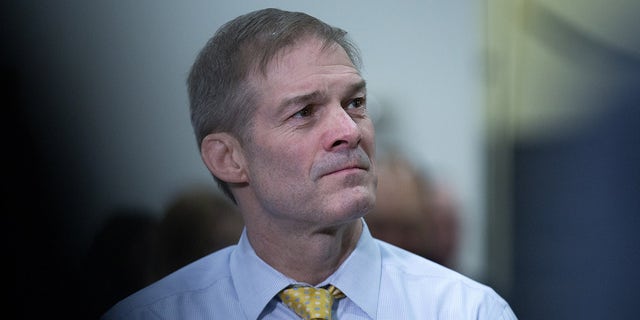 Representative Jim Jordan, a Republican from Ohio, pauses while speaking to members of the media in the Senate Subway at the U.S. Capitol in Washington, D.C., Thursday, Jan. 30, 2020. (Photographer: Stefani Reynolds/Bloomberg via Getty Images)

The speculation around a Jordan Senate run comes after Portman on Monday said he wouldn’t seek a third term, pointing to congressional gridlock as a reason.

“I don’t think any Senate office has been more successful in getting things done, but honestly, it has gotten harder and harder to break through the partisan gridlock and make progress on substantive policy, and that has contributed to my decision,” Portman said.

Portman served a decade and a half in the House before serving as U.S. Trade Representative and director of the Office of Management and Budget in President George W. Bush’s administration. He was first elected to the Senate in 2010 and easily reelected in 2016.

Pointing to his three decades in public service, the senator noted that “this was not an easy decision because representing the people of Ohio has been an honor. But I’ve been doing this a long time, longer than I ever intended.”

Portman’s decision to retire rather than run for reelection will likely make the GOP’s hopes of recapturing the chamber in the 2022 elections more challenging.

The Senate is split 50-50 between the two parties, but the Democrats hold a razor-thin majority due to the tie-breaking vote of Vice President Kamala Harris. That means Republicans only have to flip one seat in 2022 to regain the majority they lost in the 2020 elections.

But the GOP is defending 20 of the 34 seats up for grabs in the next midterm elections.