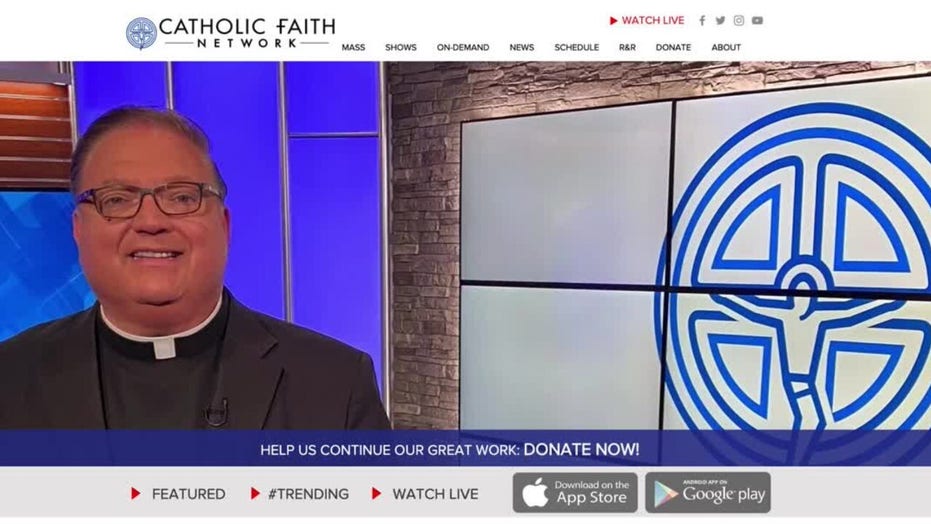 Keeping the faith, on your TV and smartphone

The Catholic Faith Network has broadcast religious services, talk shows, cooking shows, and educational programs to the New York, New Jersey and Connecticut areas since 1969. Through their 40 plus year span, the network has been helping people keep the faith with the help of modern media.

As we enter the sixth month of the coronavirus global pandemic here in the United States, Americans are weary of the toll the silent but virulent pathogen is taking on all sides of everyday life.

Cases and deaths continue to climb, leaving many with a difficult but practical question:

What good is faith in the face of a destructive and runaway virus that seems immune to our prayers to crush it?

My short answer to such a dilemma is that faith is more critical than ever, lest we slip into a spiral of hopelessness and despair.

Since February, my family and I have been asking the Lord to stop COVID-19 in its tracks, and we’ve believed all along that an all-powerful and omnipotent God could do so.

But we can’t always see what the Creator of the world is up to. He is at work even though I can’t clearly discern what He’s doing. I’ve often compared Him to a master chess player.

Because He can see all, God sees the end from the beginning. If the world is the chessboard and we’re its pieces, His first move is always made with the last one in mind. Because we're ignorant of the larger plan, though, we're often frustrated by His actions.

If the presence of God was predicated on the absence of illness and death, nobody would believe in the Divine.

For starters and perspective, death is part of the normal course of life. It’s the human condition. Second, by most estimates, hundreds of millions of people have been killed by plagues and pandemics – with many succumbing over the course of the last two thousand years alone.

From the “Antonine Plague” in the second century that claimed over 5 million people to the “Spanish Flu” that took out over 100 million across the world in the early part of the twentieth, devastating, widespread sickness has actually been the norm throughout history, not the exception.

For those who may question why God allows suffering, I encourage them to look to the cross. Christianity is the only major religion that teaches that God suffered and even died, a reminder that He is intimately familiar with and empathetic to our pain and our grief.

I think the source of so much of the current angst is rooted in our overreliance on government to find solutions to our problems – and an under reliance on God. Yes, our elected officials and other representatives must do their part – but they can only humanly do so much.

As a Christian, my hope, trust and faith are not in the president or the other members of the government. Nor do I place them in the highly talented scientists who are operating around the clock to develop a vaccine or find safe and effective treatments for those who are sickened by COVID-19.

Instead, my hope and faith are found in Jesus Christ.

The Bible commands us to pray for our elected leaders, regardless of party or ideological bent.  Strong, sound leadership provides the best chance for citizens to thrive in an imperfect world.

But beware – it was the Psalmist who once counseled, “Do not put your trust in princes, in mortal men, who cannot save.”

So what are we to do?

A few months ago, I had the pleasure of interviewing John Burke, author of a great book, “Imagine Heaven: Near-Death Experiences, God’s Promises, and the Exhilarating Future That Awaits You.”

In the book, John examined the stories of over a thousand people who claimed a near-death experience: surgeons, commercial airline pilots, pastors, bank presidents, college professors and more.

As I read, I was struck by how quickly we get wrapped up in the difficulties of this world and fail to look ahead to the promises of Heaven. What the subjects in John’s book describe is overwhelmingly beautiful – a reminder for Christians to not obsess over the trials and tribulations of this world but to instead look beyond them.

My faith reminds me that our present-day troubles will eventually pass. The rain will stop, the clouds will part and the sun will someday shine again. What I see is not all that is – nor will one day be.

I like the way the late Eugene Peterson once interpreted the apostle Peter's words in the New Testament:

"Keep a cool head. Stay alert … Keep your guard up. You’re not the only ones plunged into these hard times … keep a firm grip on the faith. The suffering won’t last forever. It won’t be long before this generous God who has great plans for us in Christ—eternal and glorious plans they are!—will have you put together and on your feet for good. He gets the last word; yes, he does."