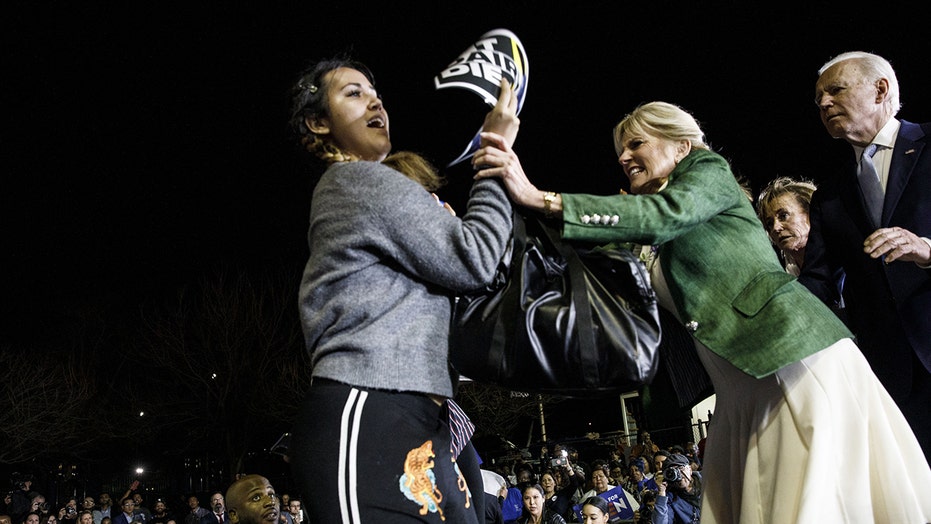 Super Tuesday was then-candidate Joe Biden’s chance at a Hail Mary pass to revive his presidential campaign — but it was his wife, Jill, who drew praise for playing NFL-style defense that night.

One year ago Wednesday, the Philly-native first lady stiff-armed a vegan protester who rushed her husband at a campaign event in Los Angeles.

On the 2020 trail, the Bidens were on stage celebrating turnaround Super Tuesday results when a couple of “Let Dairy Die” protesters crashed the stage.

Biden’s security team jumped on the first activist and escorted her away. But a second woman rushed up from the crowd just seconds later. 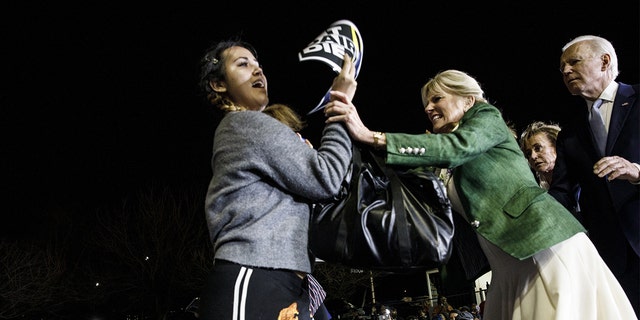 Jill Biden, 68 years old at the time and wearing a green blazer over an off-white dress, intercepted the protester, grabbing her by the wrists and holding her away from her husband.

Symone Sanders, then a top adviser to Biden’s presidential campaign, blitzed in for the assist, tackling the activist from behind and dragging her off stage with help from other aides.

Video and photos of the incident went viral almost immediately, with commenters joking, “Jill Biden for Secretary of Defense” and pouring on NFL linebacker comparisons.

Both Biden and Sanders joked about the event and the praise they were receiving on Twitter.

“What a night,” Biden wrote.

“I broke a nail,” Sanders joked.

Sanders told “The Daily Briefing” the next day that they had reacted reflexively.

“I don’t think we even really thought,” she told Fox News’ Dana Perino. “We saw what was happening and jumped in. We’re happy nobody was hurt. Everybody is safe.” 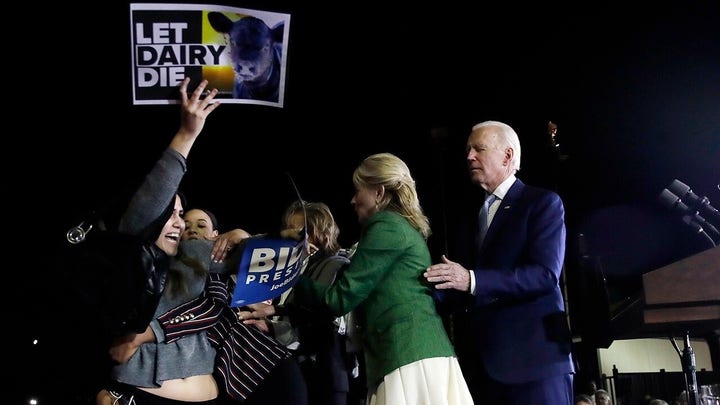 Biden’s success on Super Tuesday helped reinvigorate his campaign and led to him securing the Democratic nomination last year.

Anti-dairy protesters had also interrupted Sens. Bernie Sanders and Elizabeth Warren on the campaign trail to spread their message.

Their group, Direct Action Everywhere, told Fox News Tuesday that it is still pushing for an end to all factory farming, including dairy farming.

“President Biden has not only ignored the growing public sentiment to ‘Let Dairy Die,’ but he actually appointed a secretary of Agriculture who made a million-dollar salary as a dairy lobbyist,” Ashley Froud, the protester Jill Biden intercepted, told Fox News in a statement. “It’s time for Biden and the rest of our government to stop living in the past, and stop propping up this dying industry with billions in subsidies.”

Biden’s nominee for agriculture secretary, former Iowa Gov. Tom Vilsack, was confirmed in a 92-7 bipartisan vote by the Senate last week. He had also served in the same position during the Obama era.

Sen. Sanders, who had also been met with Direct Action Everywhere protesters during last year’s presidential campaign, was one of the seven voting against Vilsack’s confirmation.

On the other end of the spectrum, Vilsack has been accused by some members of the dairy industry of failing to do enough to help them during his last stint as USDA chief, which began during the Great Recession.

In addition to playing defense at the national level, Jill Biden is a college educator and bestselling author, according to the White House.

She was born in Hammonton, New Jersey in 1951 but grew up in suburban Philadelphia. The Bidens have been married since 1977.