Jetstar has been operating with half its long-haul fleet out of service because of maintenance and engineering issues, contributing to widespread cancellations that have affected thousands of customers’ international travel plans.

The Qantas-owned budget airline has cancelled eight return services from Sydney and Melbourne to Bali since September 1 plus more from Thailand and Japan, and has been unable to offer some customers new flights home more than a week after their original travel dates.

About 4000 customer had flights to and from Bali cancelled, and about 180 of them were yet to accept alternative flights from the Indonesian holiday island, Jetstar said on Tuesday.

Brisbane woman Nicole De Abel was scheduled to fly with her partner and two young children from Phuket, Thailand, to Sydney on Saturday night but arrived at the airport to discover the flight was cancelled. 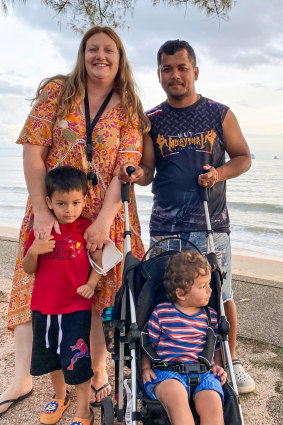 Nicole De Abel (pictured with her partner and children) says she is stranded in Thailand after Jetstar cancelled her flight home.

Nicole’s mother, Michelle, said the earliest the family could rebook was September 12 – nine days after they were due to fly home.

“They have been over there for five weeks and they want to come home.”

Jetstar operates 11 Boeing 787 Dreamliners, and has confirmed five of them are currently out of service. A sixth jet, which was grounded after hitting a bird, returned to service on Saturday.

The grounded planes included a 787 that was hit by a freak lightning strike on a flight from Melbourne to the Gold Coast on May 7 and sustained extensive damage to its fuselage.

Jetstar said at the time that it expected the aircraft to be grounded for six to eight weeks, but it remains out of service three and a half months later.

The carrier said another plane was damaged after hitting an item on a runway, while there were unexpected delays sourcing a spare part from the United States due to supply-chain constraints. Two more jets were in for schedule maintenance.

A spokesperson said one aircraft would return to service by the end of Tuesday and it was “working hard to get the remaining aircraft back in the air as quickly as possible”, with most expected back by the end of next week.

“We sincerely apologise for the frustration and inconvenience this disruption has caused our customers,” Jetstar said.

“Our teams are working hard to get passengers on their way as soon as possible. We are putting on five special services to bring people home and booking seats on Qantas flights also.”

The budget carrier’s woes are the latest blow to the Qantas Group after a shocking run of customer service issues that have damaged its reputation as travel demand bounces back post-pandemic.

Two weeks ago, Qantas chief executive Alan Joyce apologised to customers for widespread delays, cancellations of flights and lost baggage, which he said were caused by staff shortages. The airline laid off about 8000 employees – close to a third of its workforce – when COVID-19 grounded its operations.

Airport chaos could worsen next week when workers from the baggage-handling company Dnata, a contractor to Qantas and more than a dozen international airlines, prepare for a 24-hour strike on September 12.

Jetstar is offering passengers up to $150 per hotel room and $30 per person for food while they are stranded overseas. The airline was scheduled to operate 26 flights from Bali to Australia between Monday and Thursday.