President Trump announced Tuesday that he will issue a posthumous pardon to Susan B. Anthony, a suffrage leader. Anthony was arrested for illegally voting in 1872 and subsequently put on trial.

The pardon comes 100 years to the day when all women won the right after Tennessee ratified the 19th Amendment, which was named for Anthony. What quality stands out about Anthony and the suffragists? Resilience. 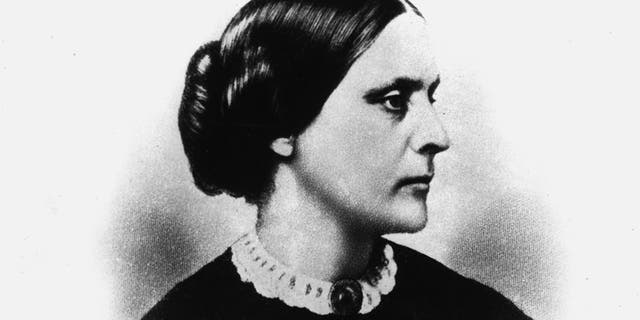 This is an undated sketch drawing of suffragette Susan B. Anthony. Anthony, who was active in the anti-slavery movements, became a leader in women’s rights in 1854 and co-founded the National American Woman Suffrage Association in 1869. She was born in Adams, Ma., in 1820 and died in 1906. (AP Photo)

Resilience guided Abigail Adams in 1776. When a British admiral intercepted and published a letter in the newspaper from her husband, John Adams, to her, Abigail had a reason to pause.

TRUMP: SUSAN B. ANTHONY TO GET POSTHUMOUS PARDON

Would she let fear of the British intercepting and publishing another letter keep her from expressing her opinions? No, showing resilience, Abigail asked John to “remember the ladies” a few weeks later in a March 1776 letter.

“If particular care and attention is not paid to the ladies, we are determined to foment a rebellion, and will not hold ourselves bound by any laws in which we have no voice, or representation,” she wrote. Although these words stayed out of the press, her prediction came true.

The next generation needed resilience, too. “The women in arms,” New York’s Westchester Herald declared after 300 attended the first women’s rights conference in New York’s Seneca Falls in July 1848.

“Hear, O man, with what thou art charged by these female Hancocks and Jeffersons,” the Vermont Mercury derided.

How did the women respond? “No words could express our astonishment … that what seemed to us so timely, so rational, and so sacred, should be a subject for sarcasm and ridicule to the entire press of the nation,” Elizabeth Cady Stanton observed, resiliently vowing to continue their conventions.

Resilience over slavery was the focus of many suffragists. “It is impossible to transfer it to paper or convey any adequate idea of the effect it produced upon the audience,” Ohio’s Anti‐Slavery Bugle published in 1851 of former slave Sojourner Truth’s suffrage speech. “Those only can appreciate it who saw her powerful form, her whole-souled earnest gestures, and listened to her strong and truthful tones.”

Resilience faced its greatest legal obstacle when Congress added the word male to the U.S. Constitution for the first time through the 14th Amendment regarding voting rights for freed black males after the Civil War.

Now legally disenfranchised, what did the women do? They bounced back and tried a new tactic.

Voting in 1872, Susan B. Anthony was arrested and put on trial.

Because he released her from jail, she was unable to appeal her sentence.  And now,  President Trump has pardoned her posthumously.

Resilience was literally on parade in 1913, when new leaders rebooted the suffrage movement and sponsored parades.

"Several thousand women, representing all classes of women from the little factory worker to the woman of leisure, and from every state in the union, march this afternoon in the national capital to bring home to the minds of the national lawmakers the strength and earnestness of the suffrage movement in this country,” Inez Milholland wrote in this sponsored story for the Salt Lake Telegram and other newspapers.

“The dominant political party—the Democratic Party—has the power to liberate the women of the United States, but they have refused to exercise that power on our behalf, and on behalf of justice and of freedom,” Milholland said in 1916.

Even though his party controlled both houses of Congress, President Wilson wouldn’t pressure Congress to pass the 19th Amendment.

“The women’s suffrage leaders, after another futile appeal to President Wilson for his support of the Anthony suffrage amendment legislation, announce that they will retaliate by picketing the White House with Silent Sentinels,” the Daily Alaska Dispatch published in January 1917.

Resilience is perseverance on a spring. For 11 months, the Silent Sentinels daily held signs in non-violent protests: “Mr. President, what will you do for woman suffrage? How long must women wait for liberty?” Their greatest show of resilience came after what came to be know as the Night of Terror in mid-November 1917.

“A diary smuggled out of the Occoquan jail by one of the suffragists purports to show that the 31 picket prisoners recently sent here are being handled violently by the guards,” the Sun and New York Press published, quoting Lucy Burns’s diary. “I was handcuffed all night and manacled to the bars part of the time for asking the others how they were, and was threatened with a straitjacket and a buckle gag.”

Because of these press reports, the Night of Terror became the movement’s emotional turning point.

After setbacks and a Congressional midterm election giving power to the Republicans, Congress passed the 19th Amendment and sent it to the states for ratification.

Resilience continued down to the final ratification vote in Tennessee. Under tremendous pressure from his political mentor, Harry T. Burn, age 23, wore a red rose signaling his opposition when he walked into Tennessee’s house chamber on August 18, 1920.

A procedural vote resulted in a tie. Burn thought about the letter he’d received that morning from his mother, who asked him to support the amendment in spite of his mentor’s bitter speech against it.

Wanting his mother to have the right to vote like her employees, Burn removed his red rose and broke the tie with an “aye.”

“The women of the nation who will be enabled to vote this November by Tennessee’s ratification of the 19th Amendment may thank Harry Burn’s mother for their enfranchisement,” the Chattanooga News published.

Just as Abigail Adams asked her husband to remember the ladies, so the unmarried Burn remembered the most important lady to him: his mother.

All women won the right to vote 100 years ago because thousands like Adams, Stanton, Anthony, Truth, Milholland, Burns and Burn paraded resilience.

Today, America boasts a record number of women office holders: nine governors, 26 U.S. senators and 101 U.S. House members. More GOP women than ever, 227, are running for Congress in 2020. All of this is because of the 19th Amendment.

Americans today need resilience to conquer COVID-19, reignite the economy, and overcome civil unrest. May the resilience on parade of yesterday’s suffragists inspire us to bounce back and overcome 2020’s challenges.