It will be a sleepless night for current and past directors and senior executives of Crown Resorts. This week the regulatory future of the casino operator will be revealed. So will James Packer’s status as an Australian gaming baron.

The fireworks will begin when the highly anticipated Commission of Inquiry’s report from Patricia Bergin is tabled in NSW parliament this week. 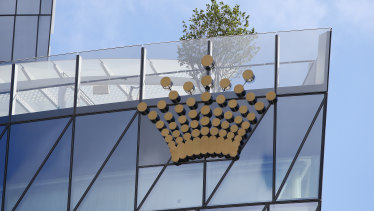 Crown Resorts could soon be in play. Credit:Getty

Depending on the outcome there will be a number of interested suitors with their fingers currently hovering over a green button ready to press ‘go’. If Packer, Crown’s major shareholder with a 36 per cent stake, is forced to sell down his stake or relinquish board control it will be game on.

Crown is a wounded corporate beast. Its share price has been knocked around by the commission of inquiry into its suitability to hold a casino licence in NSW and ravaged by COVID-19 restrictions on the operation of its facilities in Melbourne and to a lesser extent, Perth.

Would-be corporate predators will not have been sitting idle for the past few months. They will be ready – they will have done the numbers, worked up revival strategies and assessed the ongoing revenue potential of the business.

Crown’s 10 per cent shareholder Blackstone last year applied to the regulator to increase its stake. Meanwhile shareholders in The Star have been pushing for the company to review the possibility of a merger between the two casino groups.

There is a possibilit Bergin’s report will revoke Crown’s Sydney licence. That’s the nuclear option that most have downplayed but it can’t be completely discounted.

The Star already has a head start on such a deal because its management board have all passed probity. However it could potentially face questions from the competition regulator.

While the prospect of a nil-premium merger has been raised by some analysts, one influential Crown shareholder speaking on the basis of anonymity said such a deal would be resisted given Crown has superior assets.

Analysts have also raised the potential of private equity sniffing around Crown. A destabilised board and likely changes among senior management presents opportunistic bidders with a perfect window to pounce.

There is a possibility that Commissioner Patricia Bergin’s report will revoke Crown’s Sydney licence. That’s the nuclear option that most have downplayed but it can’t be completely discounted.

The pundits consider it more likely that the granting of Crown Sydney licence will be postponed until the regulator, NSW Independent Liquor and Gaming Authority (ILGA), determines that the regulatory infrastructure inside the company is secure enough to ensure that the money laundering risks are sufficiently mitigated.

But when it comes to ownership of Crown, the decision about James Packer’s influence as a controlling shareholder will determine any future corporate activity.

During the inquiry hearings it was Bergin’s counsel assisting Adam Bell famously submitted that the “common theme” across both the China arrests and the Melco transaction was the “deleterious impact on the governance of Crown Resorts caused by its dominant shareholder, CPH and ultimately Mr Packer.

Bell said the impact of that influence put Crown Resorts in breach of its regulatory agreements with the NSW regulatory authority and further that the adverse impact of CPH in compromising proper reporting lines of Crown Resorts was a leading factor leading to the China arrests.

Indeed the influence of Packer, his decision making and the mechanics of agreements that ensured he was apprised of the detail of Crown’s performance and financial prospects, were also well travailed during the hearings.

Even though information sharing agreements between the company and Packer have recently been discarded, it is difficult to see how Bergin would justify allowing Crown to continue with his current level of influence.

He may be forced to reduce his shareholding to 10 per cent or be allowed to retain a 36 per cent but relinquish all but 10 per cent of his voting rights.

Either option would likely be untenable for Packer.

Students of Packer family history will know that James Packer has inherited his father’s love of owning monopolies and corporate control.

Crown is now Packer’s primary investment and it is hard to believe he would be happy remaining a passive shareholder.

Coupled with this is the fact that in the year before the inquiry was launched Packer shopped his Crown stake around to various international casino operators and was on the cusp of selling his stake to Las Vegas-based Wynn Resorts.

After that deal fell over he entered into an agreement to sell 20 per cent of Crown to Hong Kong based Melco – in two tranches. Melco only ever bought the first 10 per cent and ultimately resold it to Blackstone.