The stock market soared more than 60% during the four years her father was president but Ivanka Trump and husband Jared Kushner saw their personal income and wealth appreciate only modestly during that time, new financial disclosures suggest, according to a report.

Neither Trump, 39, nor Kushner, 40, took a salary during their time as advisers to President Trump, and for 2020 and early 2021 they saw their personal income drop more than 20 percent from 2019 and early 2020, Bloomberg News reported.

As for overall assets, the couple’s figures ticked up only a small amount, if at all, in recent years, according to the ranges disclosed. They recently claimed assets of $206 million to $803 million, compared to a 2019 range of $203 million to $783 million, the report said.

In 2017, the first year of the Trump administration, the couple reported income of as much as $195 million and assets of $241 million to $741 million, Bloomberg reported. 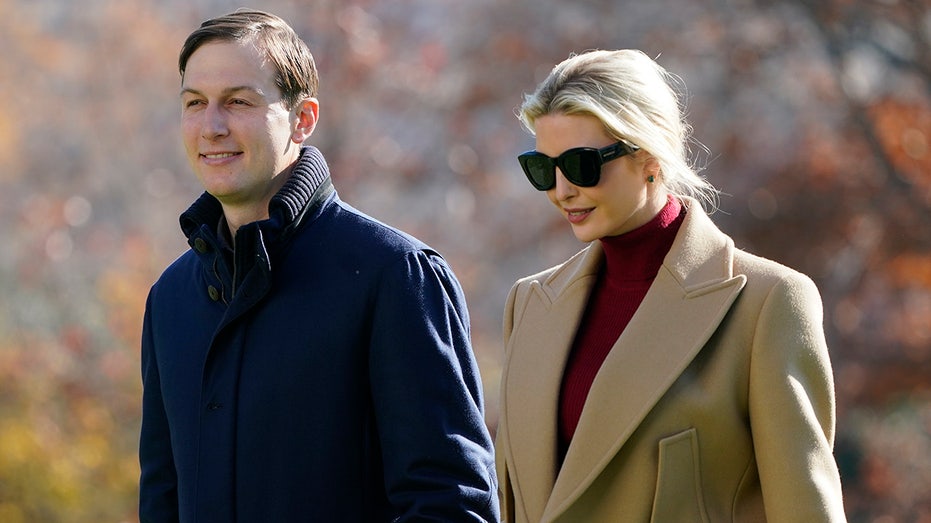 Jared Kushner and Ivanka Trump walk on the South Lawn of the White House in Washington, Nov. 29, 2020. (Associated Press)

Meanwhile, the couple’s investments in real estate and retail merchandise businesses have been adversely affected by the coronavirus pandemic, according to the report.

Setbacks prior to the pandemic have included Ivanka Trump’s fashion line being dropped by retail chain Nordstrom and others in 2018.

During the Trump presidency, Ivanka Trump’s role has included serving as co-chair of the American Workforce Policy Advisory Board, which helped push for skills-based hiring over college degrees.

Nevertheless, the couple has faced media scrutiny over their private business dealings. For example, Ivanka Trump has been criticized for trademarks she obtained in China, while Kushner attracted attention over loans to his family's businesses.

In March 2019, Kushner’s father, Charles Kushner, wrote an op-ed in The Washington Post, excoriating the media for its coverage of his family’s business dealings – and lashing out at claims that his son was engaging in conflicts of interest regarding his businesses and his work for the president.

“Jared’s service to the country has brought unprecedented scrutiny of the Kushner Companies from the media and government investigators,” Charles Kushner wrote at the time. “We are happy to assist with all inquiries, but I must note that we are already voluntarily adhering to the strictest standards to avoid even the appearance of conflicts. As a result, we have passed up many business opportunities that we normally would have pursued.

“That might not be as alluring as some of the crazy stuff I read about my family and our businesses,” he added. “But it happens to be the truth.”

The theme of the Trump family sacrificing personal gain for the good of the country has been one that President Trump stressed as well during his years in the White House.

The president has routinely donated portions of his salary to various government agencies. Recipients have included the National Park Service, the Department of Veterans Affairs and the Department of Health and Human Services, USA Today has reported.

The president also thanked his family during a farewell speech Jan. 20 at Joint Base Andrews in Maryland, after leaving the White House at the conclusion of his term.

“People have no idea how hard this family works,” the president said.