Farmers across the state have pleaded with the federal government to increase the supply of rapid antigen tests (RATs) to the agriculture sector as the country’s food supply chain continues to buckle under the pressure of increasing COVID cases.

In recent weeks, major staffing shortages have emerged in warehouses, distribution centres and supermarkets across the country as workers have been unable to come to work due to either being sick with COVID-19 or symptomatic and fearful of potentially infecting others. 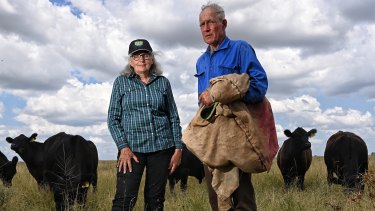 Angus Cattle farmer Shane Kilby with her husband Greg on their farm north of Dubbo. They are urging more access to rapid antigen tests as staff shortages so they can get their stock to market.Credit:Nick Moir

The pressure has been most acutely felt in the meat industry, with many supermarkets’ shelves empty of nearly all red and white meat. Shane Kilby, a cattle grazer near Dubbo in NSW, told The Sydney Morning Herald that access to RATs was essential to provide more stability and certainty in meat supply.

“There’s a lot of investment in time for cattle, it’s a couple of years from paddock to plate,” she said. “So we need certainty in our markets, if there’s any weakness or blockage it can disrupt an entire industry.

“It would be good to have better access to RATs. We need the government to look at the bigger picture of the whole supply chain and make things move along.”

Lamb processing has been severely impacted, with one abattoir in Tamworth operating with just 50 staff, down from its usual 250, and Ms Kilby said she expected similar pressures would start to affect the beef supply too.

Fruit and vegetable growers are also feeling the pain. Fiona Hall, an apple and cherry farmer in Orange, NSW, told the Herald she had been forced to walk away from entire crops of ready-to-be-picked fruit due to a lack of capacity at supermarket distribution centres.

“A lot of our orders have been limited right when we’re at the peak of our crop because the DCs [distribution centres] haven’t got enough staff to pick them, pack them and get them out to the shops,” she said.

“And even if they do get out to the shops, even the stores haven’t got enough staff sometimes to get the product onto the shelves. So, it’s a disaster. Some pressure valves need to be released, we need to start getting enough of those RATs and getting staff back to work.”

Compounding these issues for the nation’s food producers is a corresponding drop in the volume of exports for fresh produce, again due to the virus which has caused major delays and rapidly increased costs for international shipping. 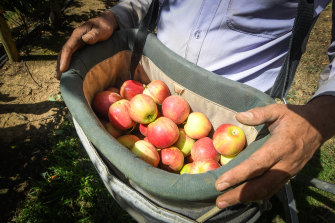 Fruit has been left to rot on the tree at some orchards due to supply chain issues.Credit:Justin McManus

In an effort to relieve pressure on supply chains, NSW and Victoria’s state governments have introduced rules that have stopped isolation requirements for essential, asymptomatic workers even if they are a close contact of someone with COVID-19.

However, this only solves part of the problem, NSW Farmers Association president James Jackson said, with those workers still required to locate, purchase and complete daily RATs.

“The lack of RATs has been very problematic, so we, like everybody else, are very keen on having them be more readily available,” he said. “And with the government going from managing the reporting themselves to asking businesses to manage it, we think it’s sensible for them to subsidise the costs.

“We’ve got to make sure that the business imperative is included in the conversation because some of our supply chains have fallen over.”

It’s a disaster. Some pressure valves need to be released, we need to start getting enough of those RATs and getting staff back to work.

The lack of access to fresh fruit and vegetables has started to pose problems for the nation’s fast-food chains, which so far had been largely unaffected over the course of the pandemic with their stores operating mostly as usual.

Mark Koronczyk, chief executive of vegetarian chain Lord of The Fries, said his stores were having trouble locking in supplies of key menu items such as onion rings and vegan sour cream. “When we go to the markets to buy our onions, there are two parts to the problem. One is that the staff at the markets are sick and aren’t showing up, and then you’ve got the pickers of the onions who are also sick,” he said.

“So you might start to see some states with onion rings off the menu. It’s definitely starting to affect us, and we’re hoping that doesn’t go for too much longer.” 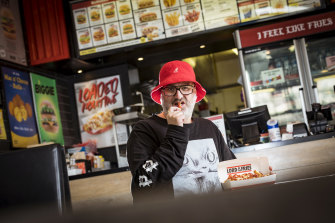 Lord of the Fries founder Mark Koronczyk says the company is having issues finding onions for its onion rings.Credit:Chris Hopkins

The Australian Chicken Meat Federation (ACMF) has also joined calls for governments to supply rapid tests, saying Australia is in the midst of a nationwide chicken shortage. Fast-food chain KFC has reportedly been unable to serve its full menu in some restaurants and poultry supplier Ingham’s has temporarily ceased production of some items.

“There are plenty of chickens out on farms, but just not enough people to pick them up, process them and distribute chicken products to stores,” said ACMF executive director Vivien Kite.

Fast food chains Oportos and Red Roosters – which sells chicken as a key ingredient – confirmed they were also suffering from supply shortages. “Like so many other food providers across Australia, our supply chain is currently experiencing pressures unlike anything we have experienced before,” said a spokesperson for Craveable Brands, which operates both Oportos and Red Roosters.

The chicken fast-food chains have so far managed to navigate the situation with relatively uninterrupted supply to date. “But we are forever mindful that the situation is not easy and that it can change at any time,” the spokesperson said.