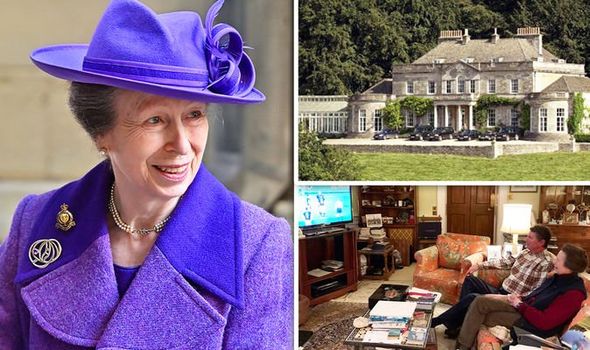 Located between the villages of Minchinhampton and Avening, Gatcombe is in the heart of the Cotswolds. The Grade II-listed Manor House, which is set in a reported 730-acres of parkland acquired a royal owner in 1976 when the Queen bought the property as a present for her daughter Princess Anne. The gift was following the royal’s wedding to Captain Mark Phillips in 1973. But what does it look like inside?

However, it is likely that the home, with its extensive grounds, is worth much more now.

Princess Anne and Mark moved into the house a year after saying “I do”.

It is where they raised their two children Peter and Zara.

Following their divorce in 1992, Mark moved into nearby Aston Farm and a few months later, Princess Anne married her second husband Lawrence, who has helped her maintain the estate ever since.

Today, Gatcombe is run as a working farm with a range of livestock, including breeding horses and cattle.

It is also home to the Festival of British Eventing which takes place in the grounds every August, reflecting both Anne and her daughter Zara Tindall’s passion for equestrian events.

While Anne’s older brother Prince Charles is known for championing action for a sustainable future, Anne, who is the patron of a number of agricultural charities, is also passionate about farming issues.

Following a 2014 interview with Countryfile, Anne was described as “the most rural royals” during a visit to her Gloucestershire home.

Speaking about the house and land, Anne told the BBC show: “It’s really nice to come back and just be yourself in an area like this.

“Being able to take on a place like this – for me, I’ve got to make it work.

“This is not something that comes free, this has got to pay its way, otherwise I can’t stay here.”

As well as her farming enterprise, Gatcombe has become the home for Anne’s expanding family.

In 2013, Zara and her husband Mike Tindall moved onto the estate before welcoming their children.

They are regularly pictured enjoying family days out in various locations on the estate.

While the grounds and events held on them have been heavily photographed, the rooms inside the property have seldom appeared publicly.

However, during the COVID-19 lockdown, Princess Anne and her husband were photograph in the living room.

The image which was posted to the Royal Family’s Instagram account showed a cosy set-up complete with a floral sofa and matching armchair.

There was a selection of wooden furniture scattered around the room.

Fans were given a glimpse into one of the several reception rooms.

The Princess Royal was opening the NHS Louisa Jordan Hospital in Glasgow via Zoom.

Behind her were several family photographs – including one of her daughter Zara and son-in-law Mike’s wedding.

There was also a glass cabinet filled with animal and bird figurines, as wells a countryside watercolour scene, possibly painted of the Gatcombe estate itself.

Then to mark Anne’s 70th birthday on August 15, 2020, a series of photographs were released.

The royal was seen sitting in a reception room designed with stone flooring and luxurious furniture, including a rose gold armchair on which she sat.

A second photograph gave fans a closer look at the stairs, showing that it has white wainscoting running down either side, a black steel bannister with wooden railings, and burnt orange walls.

A selection of framed photos positioned on the wall were also seen in the background.