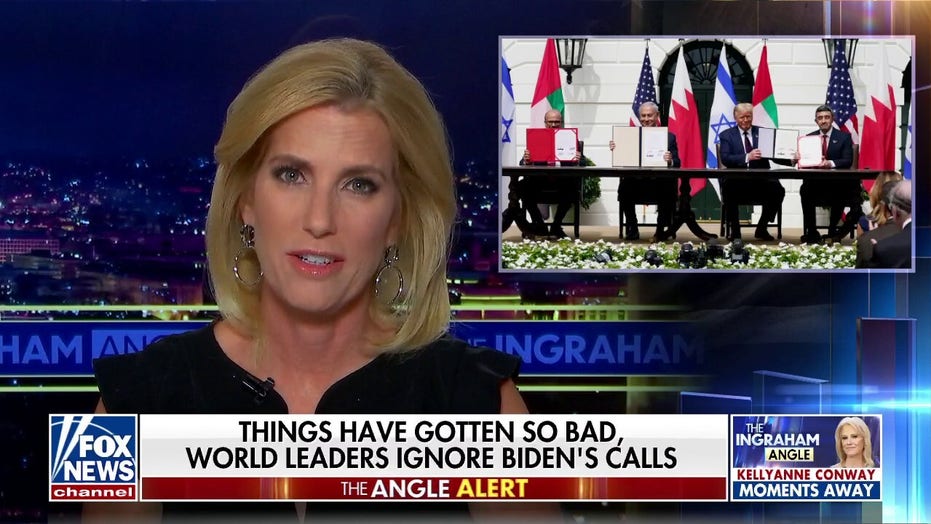 During 2020, all we heard was how important it was to restore America’s leadership position in the world. Well, Joe Biden has squandered it, says Laura Ingraham.

“No one — not one single bad guy on Earth — fears Joe Biden,” she said. “So the grown-ups — the countries [that] understand power and how the world really works — they’ll make the key decisions in Ukraine. So the Europeans, the Russians, the Ukrainians and the Chinese will be at the table. We’ll just have to take whatever arrangement they eventually make.”

Biden has “never been a leader,” Ingraham added, calling him “a glad-handing grifter, a creature of Washington, where so much of what passes as leadership is really just choreography.”

” … And in the real world where serious people play for keeps, he has been measured and found to be weak.”

Similarly, Vice President Kamala Harris “literally has zero talent and zero relevant experience at a time and place that requires a great deal of both.”

As for China, she explained that it could stop Putin because of its trade ties to Russia.

China sees the Biden administration as “just a little more than a joke at this point,” she added.

Treasury Secretary Janet Yellen and climate envoy John Kerry are pro-China, while Biden “was a cheerleader for the CCP” for years, Ingraham continued.

“In fact, today we learned that Biden is rewarding China by delaying a key trade investigation, which would have been the trigger for tariffs like those [former President Donald] Trump had put in place,” Ingraham said. “So the pro-China forces in the administration at Treasury and Commerce, they won out as we predicted they would, signaling more weakness to Beijing.”

“So why would China ever take America seriously when our own government is so easy to intimidate?”