The Nuix board has set up an independent sub-committee to address investor concerns about its disastrous initial public offering (IPO) by its largest shareholder, Macquarie Group, and promised it will appoint more independent board members.

In a statement to the ASX on Monday morning, Nuix said the initiatives were in response to recent market feedback. It follows a joint investigation by The Sydney Morning Herald, The Age and The Australian Financial Review last week which revealed questions about the company’s governance and financial accounts in the years before it floated.

“To ensure appropriate oversight and review of recent matters raised by market participants, the Board has established an Independent Board Sub-Committee comprised of independent directors Jeff Bleich, Sir Iain Lobban and Sue Thomas. The Sub-Committee will work with external advisers and Nuix’s internal legal and risk management functions,” the company said. 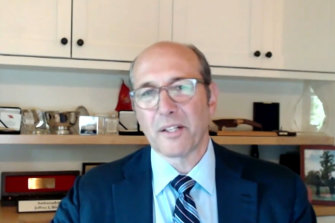 Nuix chairman Jeff Bleich told shareholders he was “incredibly sorry” during the investor meeting on Tuesday.

It declined to specify what matters investors raised with the company, but also said it has appointed an international search firm to recruit more independent board members.

At the company’s investor day and market update last week, Nuix’s new chairman Jeff Bleich admitting that the company had not developed the governance and communications structures needed by a billion-dollar public company.

The current Nuix board consists of five directors, but this includes its chief executive Rod Vawdrey and Macquarie executive Dan Phillips, both of whom were instrumental in the public float of the company which saw Macquarie and founder Tony Castagna cash in more than $650 million worth of shares at $5.31 each.

Macquarie remains Nuix’s largest investor with a 30.8 per cent stake.

The stock last traded at $3.53 after a string of downgrades and the investigation which included a report on Tuesday morning which revealed Nuix executives were questioning the quality of the forensic data software company’s core products and calling for more resources to “slow the bleeding” just weeks after its sensational sharemarket listing led by Macquarie Group last December.

Macquarie and Mr Castagna were also forced to quell an internal revolt against Mr Vawdrey.

Mr Castagna, who spent time in jail for tax fraud but was later acquitted, stepped down as chairman ahead of the float but still has a consulting role with the company.