Democrats are increasingly bullish on their chances of winning a Senate majority in November, eyeing not only the ouster of Senate Majority Leader Mitch McConnell but also the construction of a majority that would empower them to pass large swaths of their agenda.

At the beginning of the 2020 election cycle, Democrats had a narrow path to the majority, reliant on sweeping a series of Democratic-leaning and swing states while limiting their losses. With less than 120 days until Election Day, they believe some of those states are all but locked up, and a candidate fundraising surge combined with Republican President Donald Trump’s plummeting poll numbers has them believing they can triumph in even solidly Republican territory.

“In this environment, races that felt like Hail Marys don’t feel like Hail Marys anymore,” said J.B. Poersch, the executive director of Senate Majority PAC and the top Democratic operative on Senate races, as he ticked off the party’s newfound opportunities in Georgia, Kansas, Alaska and elsewhere. “Do I sound excited? I’m getting excited.”

Presumptive Democratic presidential nominee Joe Biden told a group of journalists on Monday that he was optimistic the party could win up 55 Senate seats in November, up from the 47 they hold today. (Two independent senators, Bernie Sanders of Vermont and Angus King of Maine, vote with the Democrats.)

A potentially expanded majority could have significant implications for the Democratic agenda. Senators such as Joe Manchin of West Virginia and Kyrsten Sinema of Arizona have long been willing to vote against the party line, and Democrats’ ability to pass the party’s plans to expand health care, combat climate change and tackle other issues will grow if Democratic leaders don’t need to count on moderates for a majority vote.

It’s far from guaranteed Democrats will even take back the Senate, never mind build a substantial majority. Many of their candidates, including Theresa Greenfield in Iowa and Cal Cunningham in North Carolina, are relative newcomers who have never run in a statewide general election and are about to experience tens of millions of dollars’ worth of attacks on their character and policy positions for the first time.

Only two of the states Democrats are targeting, Colorado and Maine, saw Hillary Clinton victories four years ago, and winning in states where Biden falls short or decides not to fully compete could prove impossible in an era of nationalized elections.

Republicans are skeptical of a Senate wipeout. Democrats were optimistic about taking back the Senate in 2016 and even briefly saw a path in 2018, but had their hopes dashed each year as the candidates who were supposed to triumph in Republican-leaning and swing states faded on Election Day.

Republicans are unquestionably on defense: National Republican groups have not reserved a single dollar’s worth of television time in any state held by a Democratic senator for the fall, but they plan to spend roughly $55 million in Montana, Kentucky and Iowa ― three states Trump won by more than 10 percentage points in 2016.

Last week, both Democratic and Republican groups reserved ad time in Georgia. Poersch said the state had increasingly been showing up in Democratic modeling as a “tipping point state” that could decide whether the party wins the majority.

Adding to the problem is the astonishing fundraising hauls put together by Democratic candidates: astronaut Mark Kelly in Arizona raised $12 million, Cunningham took in $7.4 million and Montana Gov. Steve Bullock raised $7.8 million. All banked at least $3 million more than GOP incumbents in their states.

In total, 13 Democratic challengers outraised Republican incumbents in the second quarter of 2020, according to newly filed Federal Election Commission reports. Only one Republican challenger, veteran and businessman John James of Michigan, managed to outraise a Democratic incumbent.

Still, Republicans believe their incumbents will be able to highlight the work they’ve done to help constituents navigate the pandemic ― Sen. Susan Collins of Maine, for instance, has aired multiple ads about her authorship of the small-business lending program ― and contrast that with the thin records of Democrat challengers they believe have skated by up to this point.

“I would trade the Democratic fundraising advantage in a heartbeat for the quality of our candidates,” Law said.

Senate Republicans’ biggest problem, however, remains Trump. His failure to mount an effective federal response to the coronavirus and his persistent use of racist rhetoric in response to the Black Lives Matter movement have driven him to new levels of unpopularity. Multiple public surveys this week showed Biden taking a double-digit lead in the presidential race.

Trump has largely disappeared from Republican campaign ads. But it is highly unlikely any GOP candidates will break with the president in a significant way, for fear of angering their party’s core voters. Even Collins, who refused to vote for the president in 2016, has remained mum on whether she plans to back him this time.

The bet, Republicans strategists said, is that Trump’s slide isn’t permanent and committed GOP voters will “put their jerseys on” in the fall.

“Some of these things are temporary release valves, not realignments that are going to last until November,” said Josh Holmes, a former chief of staff to McConnell. “Don’t make decisions you can’t take back. This is not the time for radical shifts.” 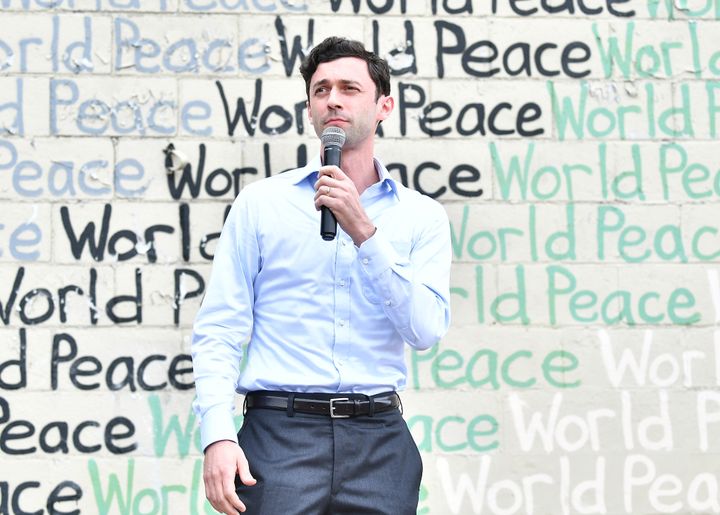 Georgia is perhaps the best example of why the map is expanding and why Democrats may struggle to ultimately capitalize. The state is a tempting target for Democrats, with 16 electoral votes and two Senate seats up for grabs, to go with an increasingly liberal group of voters in the suburbs and more than 150,000 voters of color who have registered since 2018.

Jon Ossoff, who won the Democratic primary for the right to challenge GOP Sen. David Perdue in November, said national Democrats need to invest in legal work to protect voters in a state where voter suppression has led to hours-long waits at polling sites in majority-Black precincts.

“All the money in the world for television in October will not win the day unless voters are registered in the summer, and the resources are there to protect the franchise,” Ossoff said. “This will be ground zero in November, and I think the national party recognizes that.”

Democrats’ path to a sizable majority almost certainly requires winning one, if not both, seats in Georgia. But there are real obstacles to a victory in either race. Ossoff plans to contrast his work as an investigative journalist with what he calls Perdue’s self-enrichment and corruption, but Republicans don’t think much of Ossoff, who narrowly lost the most expensive House race in American history in 2017.

“A résumé so fake Hollywood could write it,” a new ad from the National Republican Senatorial Committee says of Ossoff. “Policies so extreme only Hollywood would want them.”

The second race, where Democrats have rallied behind Rev. Raphael Warnock, is a special election to replace retiring GOP Sen. Johnny Isakson. The race, which will begin with an all-party primary in November also featuring Republican Sen. Kelly Loeffler and conservative GOP Rep. Doug Collins, will almost certainly continue with a Jan. 6 runoff. Democrats have historically struggled in those runoff elections.