So much for Thursday’s introduction to the new transparent Crown – the company that recognises its past mistakes and wants to engage with its stakeholders. Its hour-long media briefing was a blast from the past.

This column can only provide a recorded account of Crown’s briefing on its loss-making first half. I was “uninvited” from attending – given each of the few news organisations able to dial into the teleconference were allowed only one participant. Commentators such as myself didn’t make the cut.

It seems there was an attendance “miscommunication”, according to Crown’s public relations representative. 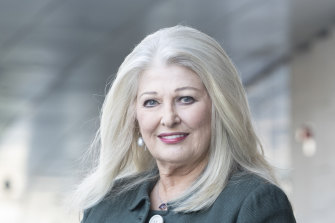 Anyone that read the damning report from the Crown inquiry would be familiar with the company’s form on “communications” – executives didn’t talk to each other and most board members were clueless to what was going on inside the company.

For those few media participants on Thursday that were given the opportunity to ask questions of the now-executive chairman Helen Coonan at her first public grilling since Patricia Bergin’s Commission of Inquiry report was released, it was slim pickings.

In what sounded like a corporate filibuster, most of the time was spent listening to Crown’s chief financial officer, Alan McGregor, meticulously detail Crown’s financial results for the six months to December 30.

Question time was limited to 15 minutes and was largely unedifying.

It must be said that under normal circumstances and for most companies the release of an earnings report is rightly dominated by the chief financial officer.

The trouble is that this was not a normal reporting period and if the past 12 months has demonstrated anything, it is that Crown isn’t a normal company. There was no interest in the results which were so affected by COVID lockdowns that they had no bearing on future performance.

The analysts already knew Crown would report a large loss but few bothered to print previews because they were meaningless. The actual loss came in at $120 million – not far off what was expected.

For the shareholders including James Packer, it will be a second six months period with no dividends.

One interesting element to the result was the $25 million provision for bad debts that were left behind by the junket operators who are currently banned from operating in Crown’s casinos. (The Star took an ever larger hit – but it did so last year.)

As Star’s boss Matt Bekier explained, it’s difficult to collect debts when the people that owe money are in a different country. It sounds like a reason junkets may be additionally reluctant to return to Australia.

Meanwhile, Coonan’s contribution to Crown’s media briefing felt more like a political election speech. She characterised herself as the company’s anointed saviour, the change agent, the leader who can learn from the mistakes of the past, and the person who doesn’t underestimate those mistakes. And, of course, she welcomed the report that so comprehensively excoriated the conduct of the company she has been a director of for 10 years and now chairs.

All this while turning herself inside out attempting to avoid questions on whether she is part of the problem rather than the solution.

Rather than dwell on those uncomfortable findings of money laundering, connections to organised crime and the arrests of staff in China, Coonan’s message was all about her mapping that “pathway” to suitability for Crown in Sydney, enabled by the constructive working relationship she has with the NSW regulator.

The pathway may have a few twists and turns, given the Victorian regulator has brought forward its regular review of Crown and the Western Australia government has announced a wide-reaching inquiry with powers of a royal commission.

Coonan welcomes all these regulatory forensic fact-finding efforts. I’ll wager all those Crown executives and board members can’t wait to fly to Perth for another grilling.

Her membership of the Crown board during the years of its misconduct is hardly a good resume stuffer so she is determined to be a part of its renaissance.

From the perspective of the NSW regulator and shareholders, Coonan remaining at the group is a practical necessity. Both need to avoid a total governance vacuum given the chief executive, several senior executives and half the board have following the inquiry’s findings.