Rich lister and Hungry Jack’s founder Jack Cowin has said Australia should take inspiration from its international peers and start thinking of how best to live with the virus as businesses gear up to join the vaccination rollout.

Mr Cowin told The Age and The Sydney Morning Herald Australia’s approach to dealing with the virus seemed to be out of step with the rest of the world, with states and territories locking down swiftly with just a handful of active cases. 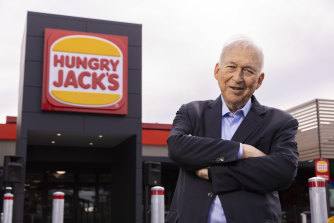 The 79-year-old Jack Cowin believes Australia should look at how to live with the virus.Credit:James Campbell

“Queensland extended their lockdown because they have 15 people with cases, and then you see some of the numbers coming out of the UK and US where there are thousands of people coming down with COVID and they’re just pressing on,” he said.

“I think there’s an argument that says we’ve been fortunate as a country to get to where we are, but is it now creating problems? The answer is probably yes.”

The 79-year-old businessman, who is fully vaccinated, pointed to the UK’s ‘Freedom Day’ reopening event on July 19 as an example of how other countries are successfully living with the virus. Cases in England, where about 70 per cent of the population is fully vaccinated, have trended downwards over the past two weeks.

“They’re saying: ’okay, we’ve never overcome the flu, it becomes part of normal living and you handle it on a case by case basis and you get everybody vaccinated,” he said.

“Hopefully that means you have cases but people won’t die and it won’t be as severe. I guess that’s the answer.”

His comments come as Australia’s business community steps up its involvement in the country’s vaccine rollout, with major fruit and vegetable processor SPC becoming the first company to mandate vaccination for all staff and visitors come November.

SPC’s chief executive Rob Giles told this masthead the choice to make jabs compulsory was due to the fast-spreading Delta variant, with Mr Giles believing the company had a responsibility to protect both staff and Australia’s food supply.

Hungry Jack’s and Mr Cowin’s broader Competitive Foods businesses are not yet mandating vaccines for workers but the founder said he expected businesses in all industries would go down that route in time, noting that SPC presented a “good case”. 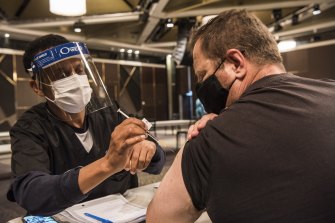 Corporate Australia has upped the ante on getting people vaccinated.Credit:Steven Siewert

“If you’re going to be dealing with food and things like that … we want people to be protected. We spend thousands of dollars on masks and shields and things within the business so vaccination is probably an extension of that,” he said.

Big four banks CBA and Westpac announced this week they were forging ahead with plans to open vaccination hubs for workers who want to get vaccinated across the business.

Other major companies such as Woolworths, Wesfarmers and Coles have also offered to host vaccination hubs to help the government with its rollout along with encouraging their staff to get jabbed when possible.