In his first state-of-the-city speech in mid-March, Rick Blangiardi, mayor of Honolulu, Hawaii, emphasized the city’s commitment to “climate resilience.”

“From sea level rise, rain bombs, and increasing temperatures, we’re taking steps toward a climate-ready Oahu,” said the mayor, who was sworn in at the start of 2021. The island of Oahu is home to the city and county of Honolulu.

“We’re shifting from talking about policy to doing something about it,” Blangiardi added.

Sustainability and climate change are issues that Honolulu’s leaders have been working to address for years. In 2016, the city was awarded a 100 Resilient Cities Initiative Grant from the Rockefeller Foundation to help fund the hiring of a chief resilience officer to work with the city on crafting climate change and resilience plans.

Since then, Honolulu has debuted a Resilience Strategy and a Climate Action Plan, which have helped inspire citywide legislation to reduce the energy burden on residents, promote access to renewable energy, expand clean transportation, and support locally grown food producers.

Here’s a look at some of Honolulu’s sustainability initiatives. 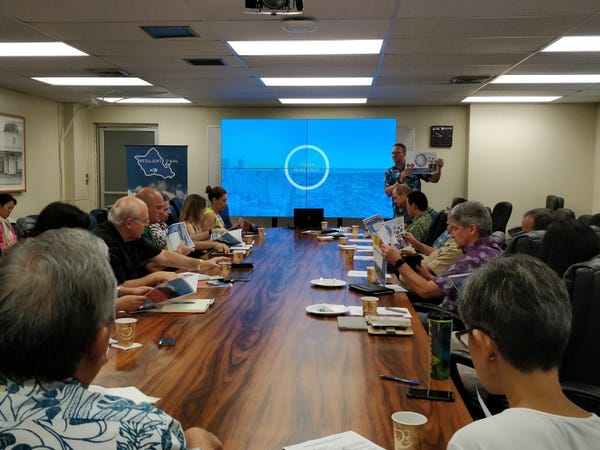 The Office of Climate Change, Sustainability and Resiliency was created by a city charter amendment that was approved by the public in 2016. A new bill signed into law in December 2020 “codifies the duties, responsibilities, and reporting requirements” of the office to ensure Honolulu meets its climate change and sustainability goals.

Bill 65 establishes an energy benchmarking system, requiring Honolulu to create and report energy and water use benchmarks for city-owned buildings. The rule is estimated to save the city $7 million over the next decade. The bill also specifies that the city will transition to 100% renewable energy and become carbon neutral by 2045.

It also addresses many other climate change and sustainability measures, including a One Water policy, examining efficiencies across the city’s water system. 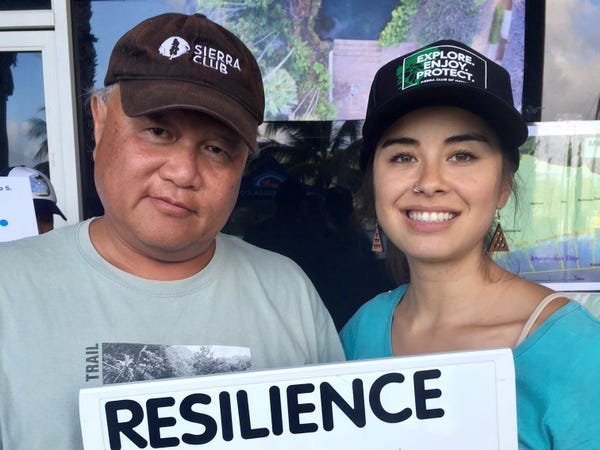 One of the central initiatives of the Resilience Office is the Oahu Resilience Strategy, which aims to address “long-term affordability and the impacts of a climate crisis that is already driving islanders from their homes,” according to the office’s website.

Planning began in 2017 when the office met with Oahu’s 33 neighborhood boards to survey residents about what concerned them most about climate change and how they thought it could be addressed, Matthew Gonser, chief resilience officer and executive director of Honolulu’s Office of Climate Change, Sustainability and Resiliency, told Insider.

Hundreds of ideas were gathered from the community. Those concepts were narrowed down into 44 actions, comprising the Resilience Strategy. The strategy focuses on four broad subjects: long-term affordability, natural disaster preparedness and response, climate change, and local community leadership.

By the end of 2020, significant progress had been made on about half of the 44 resilience actions, Gonser said. 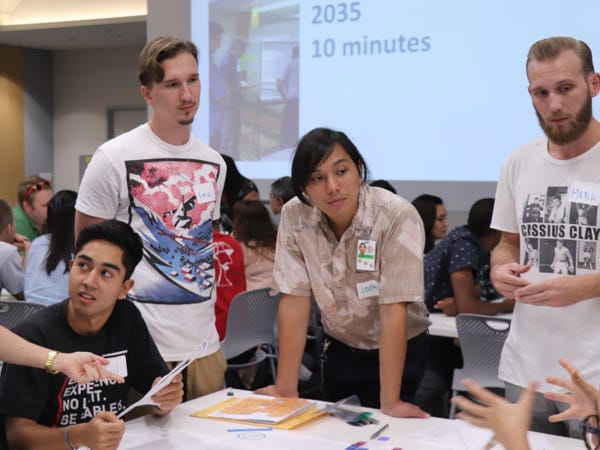 The plan was developed based on scientific evidence and community input to fight climate change and reduce fossil fuel emissions on Oahu. It spells out the needed programs, policies, and actions for the city to become carbon neutral by 2045 — and includes nine strategies to focus on over the next five years, including increasing renewable energy and energy efficiency.

To develop the Climate Action Plan, community meetings with Honolulu City Council members, Hawaii Pacific University, the University of Hawaii at Mānoa, and the Chamber of Commerce of Hawaii were held, and working groups with stakeholders were set up, Gonser said.

During the first few months of 2021, the public had the chance to share their opinions and concerns about the plan before it goes to the city council. Gonser said the Climate Action Plan will likely be adopted this year. 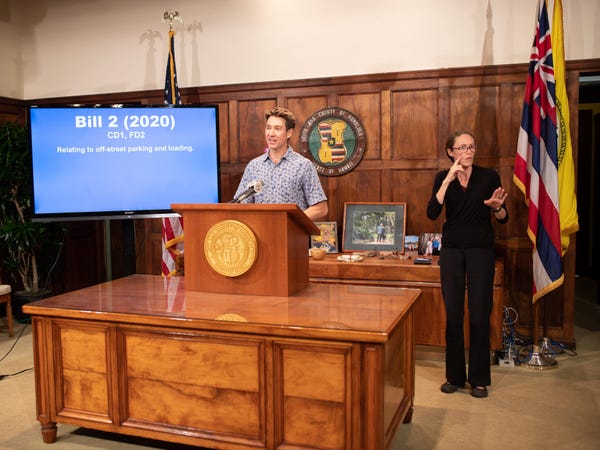 At the end of 2020, former mayor Kirk Caldwell signed Bill 2 to update Honolulu’s mandatory parking requirements for new developments. It gives developers more flexibility in how much parking to build and allows opportunities for the land to be used for other purposes, such as affordable housing.

“It’s making sure that our rules and regulations don’t force overbuilding of parking, empowering more choice and leaving it to developers to determine what’s needed,” Gonser said.

The bill supports walkable neighborhoods and cleaner transportation options, such as biking and public transportation, which Honolulu plans to transition to clean fuel.

It could also make housing more affordable since constructing and maintaining parking is sometimes a hidden cost for renters, according to an analysis by the Ulupono Initiative, a Honolulu-based organization that provides grants, investments, and advocacy to support renewable energy, locally produced food, and other sustainability-minded projects.

For urban Honolulu renters, up to 37% of their rent may go toward parking, which, for decades, has often been built based on city regulation rather than actual need.

“The bill makes progress in the right direction, better aligning with city climate and community goals, while allowing parking to remain accessible for those who genuinely need it and not requiring it of those who don’t,” Kathleen Rooney, Ulupono Initiative’s director of transportation policy and programs, said when the bill was signed. 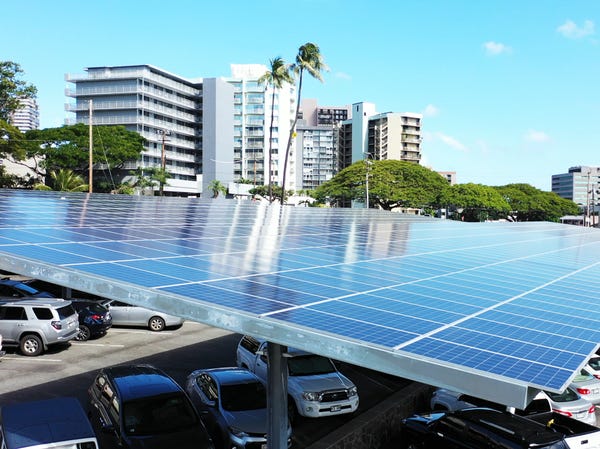 Hawaii has one of the highest average electricity retail prices in the country, according to the US Energy Information Administration, and the state relies on petroleum for most of its electricity generation.

Reducing the energy burden is a key focus area of Honolulu’s Resilience Office. In December, the city enacted Bill 58 to streamline the permitting process for residential clean energy products, such as solar power, energy storage, and electric vehicle chargers. The goal is to cut down on the costs and time it takes to install solar systems.

“We have one of the highest energy burdens in the nation,” he said. “It’s updating our energy code and making sure that all new things that are being built are ensuring long-term affordability for residents and that they can benefit from progressive infrastructure so that we can reduce the energy burden over time.” 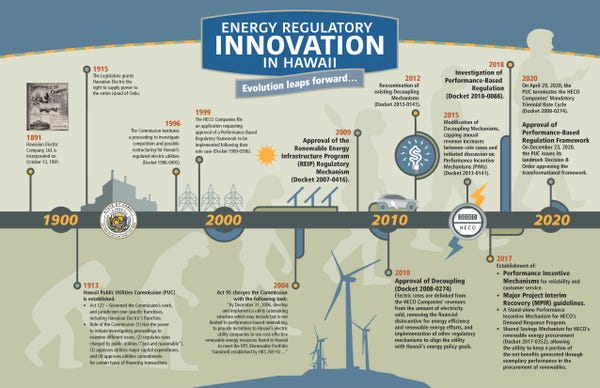 “That’s really groundbreaking,” Amy Hennessy, senior vice president of communications and external affairs at Ulupono Initiative, which provided research and other information to guide the framework’s adoption, told Insider. “The impacts toward changing the incentives for our utility to transform into a renewable energy future are significant.” 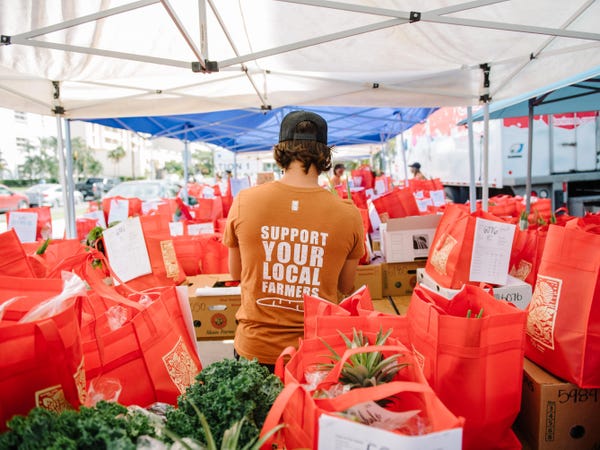 Hunger has been an ongoing problem for many communities, but the pandemic worsened the situation, as unemployment increased and many families have faced new financial struggles.

To address hunger in Hawaii, Gov. David Ige announced in October 2020 that the state would provide a $500,000 matching donation to the DA BUX Double Up Food Bucks program, which doubles the amount of the Supplemental Nutrition Assistance Program (SNAP) benefits, formerly known as food stamps, that are spent on locally grown food.

Several private-sector organizations raised $500,000 for the program, including the Stupski Foundation and Ulupono Initiative, which each provided $200,000. The state match offers $1 million total for the program.

Addressing hunger and providing incentives to encourage residents to buy more locally grown and produced food are part of Honolulu’s Resilience Strategy. The DA BUX Double Up Food Bucks program also aims to strengthen the local economy because it keeps residents’ food budgets on the island.

“A million dollars going out into communities for not just those who need access to food, but also our local farmers who needed a market — it’s actually putting dollars in their pockets while they’re growing to help provide healthy options for the community,” Hennessy said. “So it’s really a triple win.”