The next generation of entrepreneurs is looking to earn cash in the most resourceful ways possible, by using an app they can access on their phones to launch six-figure businesses.

YouTube stars, for example, can earn six figure paychecks by posting videos on their channels. Instagram influencers can make thousands of dollars by posting eye-catching photos on the app.

The average price brands pay Instagram influencers for sponsored posts surged to $1,642.77 in 2019, Business Insider previously reported. Prices for sponsored content on YouTube also picked up in 2019, after dipping the year before.

This trend is beginning to translate into retail, where resale is a growing market, especially among Gen Z and millennials. Recycling and reselling clothes allows shoppers to wear new-to-them outfits instead of repeating pieces they've already posted on social. People are keeping their clothes for half as long as they used to, according to a report by Business of Fashion.

A 2019 report by ThredUp projected the overall secondhand market will reach $51 billion by 2023, with resale making up $23 billion. The global sneaker resale market alone could be worth $6 billion by 2025.

That's where the shopping and resale marketplace app, Poshmark, comes in. Scrolling through listings looks much like an Instagram feed, where shoppers can search for their favorite brands and make offers for better deals.

Vinted, TheRealReal, and ThredUp are just a few other popular apps in the resale space.

For sellers, it's a tool to start a side hustle on a budget. Many start as college students and homemakers, and some are able to grow into a full-time business earning six figures or more in annual sales.

Poshmark cofounder, Tracy Sun, told Business Insider that a lot of sellers scale as they procure more inventory. "The path we often see people take is they start in resale and they learn how to use Poshmark, they build their audience, and then as they want to grow faster, they look to procure brand new inventory," she said.

Business Insider spoke with two Poshmark sellers who turned their side hustles into successful full-time businesses. Shannon Welch made $127,000 in sales last year and Elaine Ratner has made $1 million in sales since starting her Poshmark shop and subsequent ecommerce site. Ratner declined to tell Business Insider annual revenue through Poshmark alone.

Here's how they scaled their shops based on sales and followers.

If you have created a successful side-hustle or six-figure business on Poshmark and would like to share your story, please reach out via email to [email protected]om.

At 0 sales, a seller starts with what they've got. 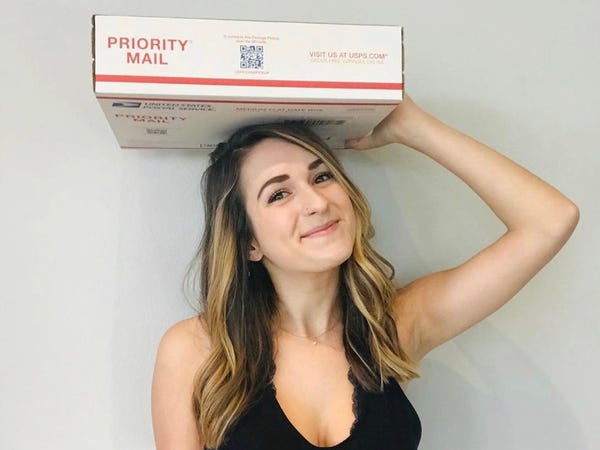 The initial appeal for many sellers is that they can set up a shop — or "closet," as it's called on Poshmark — with items they already own. They download the free Poshmark app to their phone, snap a couple well-lit photos of a Free People dress or Michael Kors handbag, add a description, and list their first pieces.

Once an item sells, Poshmark provides a free shipping label and takes 20% of sales $15 or more. For sales under $15, Poshmark charges only a flat rate of $2.95.

Shannon Welch, 22, discovered Poshmark as a junior in high-school when she realized she had too many clothes and had to downsize. She opened her shop in 2014 and as sales picked up, she turned her frequent shopping at thrift stores into buying trips for more inventory. "A Free People sweater for $3 that I could flip for $60 or $70 in a day, why not do it?" she said.

Welch estimated she now makes more than $30 per item on average. Outside of the initial cost of acquiring the items she sells, she said there isn't much more to the overhead. "USPS provides free package supplies, so you don't have to pay for any of that stuff. And really, all you need beyond that is a printer for your label," she said.

One of the main draws for Poshmark shoppers is that they can find brand names and designer labels for significantly less than the original retail price. But that's not to say those items aren't making sellers big bucks. One couple selling designer clothing has made $190,000 on Poshmark since starting their shop in 2015, Poshmark told Business Insider.

Elaine Ratner, 30, was selling used designer clothes and accessories on eBay when she discovered Poshmark. Once she opened her Poshmark shop in 2014, she found it was better-suited for handling luxury goods. "People trusted you more on Poshmark versus eBay and you are selling the same item," she said.

Part of that trust comes from the platform's "concierge" service, she said, which vets all items sold for $500 or more. Once a sale is made, the seller ships the item directly to Poshmark's headquarters where it's reviewed for authenticity before it goes to the customer. If a piece is deemed a fake, Poshmark sends it back to the seller and the buyer is refunded.

At 10 sales, sellers can scale through wholesale. 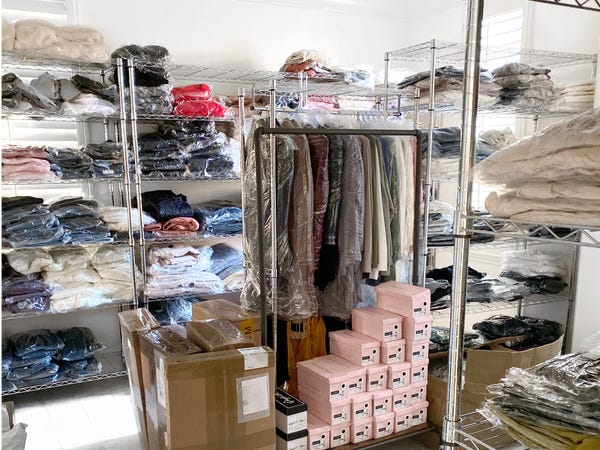 Once a Poshmark seller has built up a customer base, their next step in building their business often comes through the app's wholesale portal, which allows sellers to buy new clothing and accessories in bulk. These items are marked with a "boutique" label in the listing so shoppers can tell them apart from resale items.

Poshmark gives sellers access to their wholesale portal once they've made at least 10 sales and have an average seller rating of 4.5 or higher.

After about a year of selling, Welch tested wholesale on her shop with jewelry. She said these pieces were easy to list since the vendor provides photos and gives a manufacturer suggested retail price (MSRP). For example, she could buy five necklaces for $10 each and sell them for $50 each. "Usually the MSRP was at least five times what you're paying," she said.

This gave her an opportunity to try out a bigger commitment. "It was an easy way to take that first step towards reselling full-time and really investing more money into it," she said.

After her designer items took off, Ratner also saw wholesale as an approachable way to scale as her clientele built up. "My boutique items just blew up and now I'm starting to sell out every single item I'm posting," she said.

With more than 200,000 followers, sellers can become a style influencer. 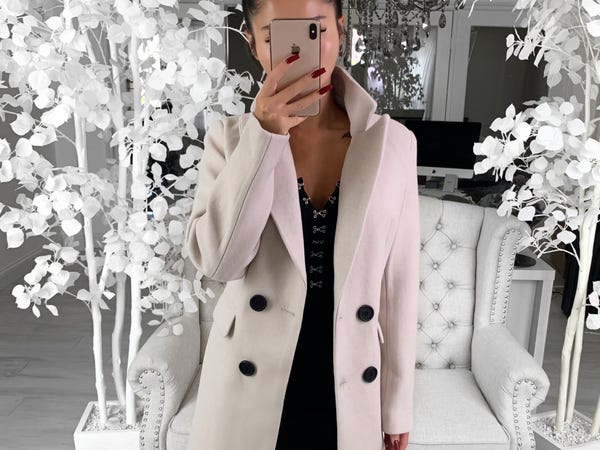 As a seller's shop picks up, they become known in the Poshmark community for a particular style in the brands they sell, how they put outfits together, and for a consistent look throughout their listings. This can make them the type of shop customers no longer stumble upon for one item, but visit frequently to see what's recently listed.

Ratner, who has over 257,000 followers on Poshmark, refers to her customers as clients. She said they trust her as their own online stylist and often look to the products she posts as a full outfit they want to replicate. "I got to know my clients, I got to know their family, their kids what they do, actually got to know their style, their favorite colors, their sizes," she said.

When she lists a new item, she'll tag specific clients she thinks will like it. "I think that's why they keep coming back to me because they feel that not only am I their personal stylist, I'm also a friend they can trust when I'm selling," she said.

Her relationships with clients are so impactful that they've sent her letters, messages, and gifts showing their appreciation. "I just never thought selling on Posh, I would get messages like this and helping girls change their lives and inspire them to be their best self," she said.

At $100,000 in sales, selling on Poshmark becomes a full-time business. 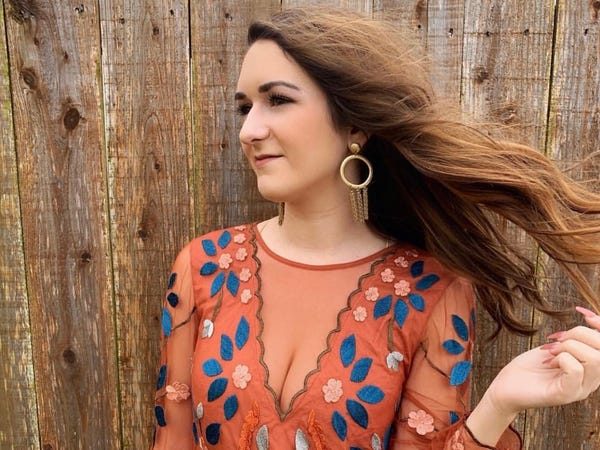 After graduating from Texas A&M with an economics degree, Welch couldn't find a job that excited her. That's when she officially took her shop full-time, even though she'd been clocking more than 40 hours a week for about a year prior.

She's glad she didn't go the traditional route. "All of these entry-level positions pay, I think typical is around $50,000 a year, and I'm making more than that doing something that I love and something that I know that I'm good at," she said.

Welch also moved to Austin, Texas. "The thrifting is really just absolutely amazing here. There's endless places to do it. And I knew that my business would thrive here," she said.

Eventually, some sellers open their own stores outside of the app. 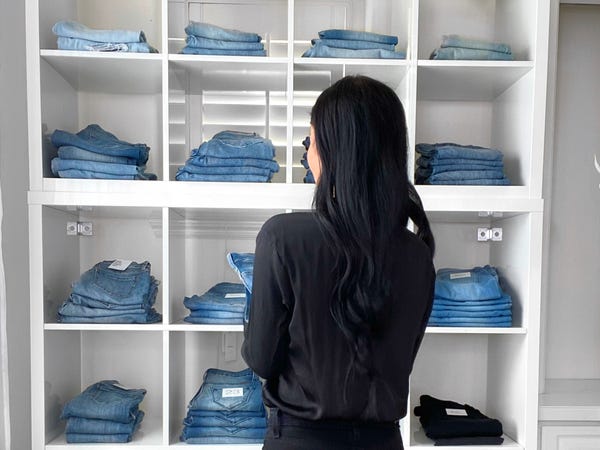 Many sellers launch their own ecommerce sites and some have built a physical presence, said Sun. "When you get to this scale, anything that you see out there in the retail world that people are doing is an option for these sellers."

Ratner also has an ecommerce site, EkAttire, selling some of the same items she posts on Poshmark. In the three years she's been selling on both platforms, she said she's made over $1 million in total sales. "It honestly created a career for me that is now full-time and I work from home," she said.

She wants to expand her Poshmark shop outside of the app, but is waiting on the right timing as she and her husband plan a family. "If I wanted to open a storefront I could, and Poshmark income alone would be able to pay for that rent," she said.