New York (CNN Business)Tesla and SpaceX CEO Elon Musk is railing against stay-at-home orders meant to slow the coronavirus pandemic, calling them “fascist” and likening them to “forcibly imprisoning people in their homes” during a Tesla (TSLA) earnings call Wednesday.

“I would call it, ‘forcibly imprisoning people in their homes’ against all their Constitutional rights, in my opinion, and breaking people’s freedoms in ways that are horrible and wrong and not why people came to America or built this country,” Musk said. “It’s an outrage.”
“Give people back their goddamn freedom,” he added.

The comments followed a string of tweets early Wednesday morning praising Texas for lifting some of its pandemic restrictions and complaining about continued coronavirus restrictions elsewhere across the country, saying, “FREE AMERICA NOW.”
The missive was the latest in a long line of tweets, dating back to late January, downplaying the threat of the pandemic.

“Give people their freedom back,” the Tesla founder tweeted Wednesday. He added in another reply: “Yes, reopen with care & appropriate protection, but don’t put everyone under de facto house arrest.”
The tweets are the latest expressions of Musk’s frustration with how the coronavirus pandemic has been handled, despite public health officials’ continued insistence that social distancing remains necessary to avoid a second wave of infections that could again overwhelm hospitals.
They reflect how one of the world’s wealthiest people has sought to leverage his enormous platform — Musk has 33.4 million Twitter followers — to influence the course of the pandemic response, sometimes downplaying the threat of the virus and contradicting guidance from government and health officials.
Though Musk has not explicitly cited or expressed support for any such group, the comments echo arguments from protestors backed by powerful conservative allies in Washington DC and some local politicians, who have ignored social distancing guidelines to express their discontent with stay-at-home orders in recent weeks. Some right-wing media figures have similarly tried to cast doubt on official information about coronavirus from health experts.
Musk’s comments also come in stark contrast to those made by some of his peers in Silicon Valley, who have urged caution on reopening.
“I worry that reopening certain places too quickly, before infection rates have been reduced to very minimal levels, will almost guarantee future outbreaks and worsen longer-term health and economic outcomes,” Facebook (FB) CEO Mark Zuckerberg said during an earnings call Wednesday. Facebook has canceled in-person company events with 50 or more people through June 2021.
Zillow (Z) is allowing all staff the option to work from home through the end of 2020, even as some offices may begin to reopen in the coming months.

Musk has been tweeting about coronavirus for months.
In late January, Musk tweeted about the virus, saying: “There is considerable conflation of diagnosis & contraction of ‘corona’. Actual virality is much lower than it would seem. I think this will turn out to be comparable to other forms of influenza. World War Z it is not.” He later added that he “meant to say other forms of ‘the cold,’ not influenza.” Health experts believe coronavirus is more highly contagious, and deadlier, than the seasonal flu.
In early March, he claimed, “The coronavirus panic is dumb,” while public health officials were scrambling to convince the general public of the seriousness of the threat the virus posed. The tweet racked up more than 1.7 million likes.
He tweeted on March 16 that it is “maybe worth considering chloroquine” to treat coronavirus, and then said, “*Hydroxychloroquine probably better.” He also noted that he received chloroquine when he had malaria and said, “doesn’t mean it works for C19, but maybe better than nothing.”
The tweets were in reference to two drugs, typically used to treat malaria and other conditions, for which the US Food and Drug Administration last month issued an emergency authorization to treat coronavirus patients. President Donald Trump and Fox News hosts repeatedly touted the medications.
But health experts have cautioned more recently against the drugs, and the FDA issued a warning, saying they should only be used in hospitals or clinical trials because they can kill or cause serious side effects.
On March 19, Musk tweeted: “My guess is that the panic will cause more harm than the virus, if that hasn’t happened already.”
Also on March 19, he tweeted: “Based on current trends, probably close to zero new cases in US too by end of April.”
The same day, he also claimed that “kids are essentially immune” to the virus. Though the elderly and those who are already immunocompromised are among those facing the highest risk of infection, health workers say young people should not underestimate their risk of contracting the disease or dying from it. 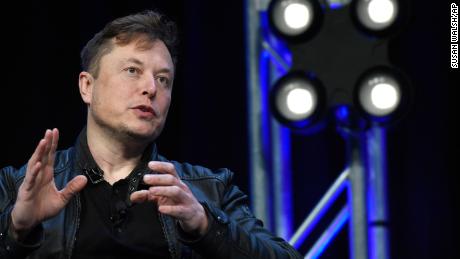 Later in March, Musk tweeted that there is an “up to 80% false positive rate” in coronavirus diagnostic testing and that “many doctors are not treating patients, due to fear of giving or receiving” coronavirus. While there have been concerns about false negatives from coronavirus diagnostic tests — in other words, people who really do have the coronavirus are told they do not — it’s not clear that false positives are a significant concern.
Earlier this month, Musk tweeted about another potential coronavirus treatment, saying, “Remdesivir is sounding very promising!”
New data from a preliminary trial suggests patients with severe covid-19 who took remdesivir could recover faster than patients who didn’t take it, the National Institute of Allergy and Infectious Diseases said Wednesday. Normally, data about a drug’s efficacy wouldn’t be released this early from a preliminary trial. However, the FDA is likely to announce an emergency-use authorization for remdesivir, a senior administration official told the New York Times.
The FDA has not yet officially approved any drugs for the treatment of coronavirus.
Last week, Musk shared a link to a YouTube video, saying, “docs make good points.”
The video, which has since been removed from YouTube for violating the platform’s policy on misinformation, featured two doctors making dubious claims about coronavirus and claiming that shelter-in-place orders are no longer necessary. The doctors, who are not epidemiologists and who own and operate urgent care centers in the Bakersfield, California area, were also featured on Fox News.
Their claims drew widespread condemnation from health officials and medical experts, including a forceful joint statement by the American College of Emergency Physicians and American Academy of Emergency Medicine, which called their statements “reckless and untested musings” that “are inconsistent with current science and epidemiology regarding COVID-19.”

In mid-March, Tesla clashed with local authorities in Northern California after the company continued to have employees coming into the plant to keep assembly lines running, despite a shelter-in-place order in the area.
On Tesla’s earnings call Wednesday, however, executives said production has been halted at the Northern California facility, in keeping with the regulations. Musk said on the call that the extended restrictions pose a “serious risk” to Tesla’s business, as the California factory produces the majority of Tesla’s cars.
“It will cause great harm not just to Tesla but to many companies,” he said, adding that many of Tesla’s suppliers are struggling. “This is not democratic, this is not freedom.”
While shelter-in-place orders do ask people to stay home, the order in San Francisco includes broad exemptions for health, grocery shopping, exercise and some workers classified as essential.
Musk also got caught up last month in a confusing back-and-forth with California Governor Gavin Newsom over a promise to donate ventilators for treating severe coronavirus patients.
On March 23, Newsom announced Musk had acquired 1,000 ventilators and would be distributing them to help California hospitals treating patients infected with the coronavirus, an effort the governor hailed as “heroic.”
But weeks later, Brian Ferguson, the deputy director for crisis communication at Newsom’s Office of Emergency Services told CNN that the governor’s office had been speaking to hospitals in the state every day and to date had “not heard of any hospital system that has received a ventilator directly from Tesla or Musk.” In a series of tweets, Musk asked Newsom to “please fix this understanding” and included a partial list of hospitals he said had been sent ventilators.
“I was not personally aware of that list,” Newsom said at a press conference. “I’m very encouraged that he put out that list and those specific hospitals that’s where he had been sending those resources and I look forward to learning more about where they went and am grateful for his support.”
CNN contacted 10 California hospitals identified by Musk on April 16 that were in the partial list of recipients he posted. Of the four hospitals that responded, all said they had received bilevel positive airway pressure (biPAP) or continuous positive airway pressure (CPAP) machines, rather than ventilators, from Tesla.
While experts said those machines could be used in some cases to aid coronavirus patients, they are far less expensive and do not work in the same way as ventilators.

Dr. Anthony Fauci, the nation’s leading epidemiologist on Tuesday called a second wave of coronavirus in the United States “inevitable.” If states lift restrictions too early, Fauci said he predicts the country could see a rebound of the virus that would “get us right back in the same boat that we were a few weeks ago,” adding many more deaths than are currently predicted.
Texas, Georgia and several other states have begun lifting stay-at-home restrictions and allowing some businesses to reopen. But social distancing measures should not begin to be relaxed in Texas and Georgia until June at the earliest, according to the model by the Institute for Health Metrics and Evaluation at the University of Washington, which assumes states will implement aggressive testing, contact tracing, isolation and crowd-size limits to prevent more infections.
The UW model projects a total of 72,433 US deaths from covid-19 by August 4. Already more than 60,800 Americans have died of coronavirus, and more than 1 million cases of the virus have been confirmed in the United States.
Representatives from Musk’s companies SpaceX and Tesla did not return requests for comment. A Twitter (TWTR) spokesperson said Musk’s Tuesday tweets “are currently not in violation of the Twitter Rules.”
Social media platforms say they have been working to elevate authoritative information about the pandemic and to curb false information about the virus, which the World Health Organization last month dubbed an “infodemic.”
Twitter updated its content moderation policy in response to coronavirus. The new rules generally prohibit “unverified claims that have the potential to incite people to action, could lead to the destruction or damage of critical infrastructure, or cause widespread panic/social unrest.” The platform’s website says it may take action particularly against claims that urge specific behaviors, such as encouraging people to patronize their local bars, but it stops short of banning general opposition to stay-at-home orders.

And while Twitter has removed 2,400 tweets since updating its content policy on March 18, the site says it will not take enforcement action on every tweet containing incomplete or disputed information about coronavirus.
–CNN’s Brian Fung and Jason Farkas contributed to this report.
Source: Read Full Article