FIRST ON FOX: With an increasing number of Democrats in the House of Representatives announcing they’re retiring or running for another office in 2022, the reelection arm of the House GOP is adding 13 additional members to their so-called “Democrat Exit List.”

The National Republican Congressional Committee (NRCC) is also taking aim at House Democrats it considers vulnerable in next year’s midterms with a new digital ads blaming them for the rise in inflation this summer and autumn. The expanded exit list and the new spots were shared first with Fox News on Tuesday.

The release of the list follows the announcements late last week by longtime Democratic Reps. Eddie Bernice Johnson of Texas and G.K. Butterfield of North Carolina that they won’t seek reelection in the 2022 midterms. Seventeen House Democrats are either retiring or running for another office next year, compared to 11 House Republicans.

“Every House Democrat has a choice to make over the Thanksgiving holiday: retire or lose. So far 17 Democrats have made the smart choice to quit,” NRCC chair Rep. Tom Emmer told Fox News in a statement. 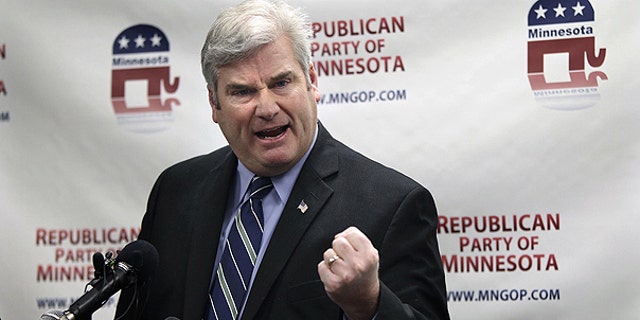 Rep. Tom Emmer of Minnesota, chair of the National Republican Congressional Committee, speaks about the ballots being challenged during a news conference at the Republican Party of Minnesota headquarters in St. Paul, Minnesota, in December of 2018.
(AP)

While Republicans lost the White House and control of the Senate in the 2020 election cycle, they defied expectations and took a big bite out of the Democrat’s House majority. The GOP needs a net gain of just five seats in 2022 to win back the House majority it lost in the 2018 midterms.

The NRCC went up with its exit list in March, spotlighting 27 Democratic House lawmakers. Among the 13 representatives added on Tuesday is Rep. Sean Patrick Maloney (NY-18), the chair of the rival Democratic Congressional Campaign Committee.

With Thanksgiving two days away and the Christmas and new year holiday season fast approaching – when federal lawmakers on the fence about retiring take stock of their lives and discuss their futures as they gather with friends and family – House GOP leader Rep. Kevin McCarthy is forecasting more House Democrats will announce their retirements.

“Once you get past Thanksgiving and members go home, and they’re Democrats and they’ve been challenged before and they’re going to get beat up, Congress is not that great,” the longtime GOP lawmaker from California told Fox News earlier this year.

House retirements are often seen as an early barometer of things to come in the midterms. The last time the House flipped, amid a blue wave in the 2018 midterms, there were 23 GOP retirements compared to just 10 among House Democrats. Competitive seats become even more vulnerable without a well-known incumbent with a healthy war chest running for reelection.

“Only members themselves know why they decide to retire. But if there’s an imbalance of retirements toward one party or another, it sometimes can tell us something about what the party with a lot of retirees thinks might happen in the midterms,” Kyle Kondik, the managing editor of the nonpartisan political handicapper Sabato’s Crystal Ball, told Fox News.

“This November, from the people who brought you the most expensive Fourth of July in history, the sequel is even worse,” says the narrator in the ads, before charging that “Democrats’ reckless spending has made everything cost more.”

The narrator urges viewers to tell the House Democrats spotlighted in the ads that “we can’t afford this.”

The NRCC started targeting House Democrats over rising consumer prices during the July Fourth holiday, and the current spots are the reelection committee’s fourth round of ads to focus on inflation.