The House is set to vote Wednesday afternoon on creating a select committee to investigate the Jan. 6 attack on the Capitol, a move Republicans say is likely to advance “a partisan agenda” rather than pursue the truth.

House Speaker Nancy Pelosi, D-Calif., introduced the resolution to create the select committee earlier this week after efforts for a bipartisan special commission on the ransacking of the Capitol by a pro-Trump mob stalled in the Senate without enough GOP votes. She said House Democrats’ unilateral move forward is necessary because “there remains no prospect for additional votes from Republican Senators to create the National Commission to Investigate the January 6th Attack.”

House Majority Leader Steny Hoyer, D-Md., said Tuesday he hopes the members of the committee will “pursue the truth, not pretend that this was some visit by tourists from somewhere out in the in the country coming to Washington to say hi and see their government in action.”

“It was exactly the opposite,” Hoyer added. “It was a violent insurrection mob that tried to stop democracy from working.”

Speaker of the House Nancy Pelosi, D-Calif., talks to reporters just after the Supreme Court dismissed a challenge to the Obama-era health care law, at the Capitol in Washington, Thursday, June 17, 2021. Pelosi introduced a resolution to create a select committee investigating the Jan. 6 attack on the Capitol this week. It will get a vote and likely pass Wednesday. (AP Photo/J. Scott Applewhite)

Republican leadership, meanwhile, is asking its members to oppose the select committee resolution.

“This select committee is likely to pursue a partisan agenda to politicize the January 6th attack instead of conducting a good faith investigative effort into the actions leading up to and the security failures of the 6th” the office of Minority Whip Steve Scalise, R-La., said Tuesday.

Among the resaons to oppose the select committee, Scalise’s office continued, are Department of Justice probes into the attack – which the select committee is not barred from interfering with – Senate investigations that have already produced reports, and that the House’s standing committees could do the same work.

Under the resolution, Pelosi will pick eight members and Minority Leader Kevin McCarthy, R-Calif., will choose five, giving the select committee more of a partisan lean than the previous Jan. 6 commission bill which passed the House with support from several Republicans. That bill would have given each party an equal number of members on the commission.

But Senate Republicans had other objections to the Jan. 6 commission bill, including that the staff of the commission would only be chosen by Democrats and that the scope of the investigation would have been limited just to the events on Jan. 6 and the factors that contributed to that specific day. 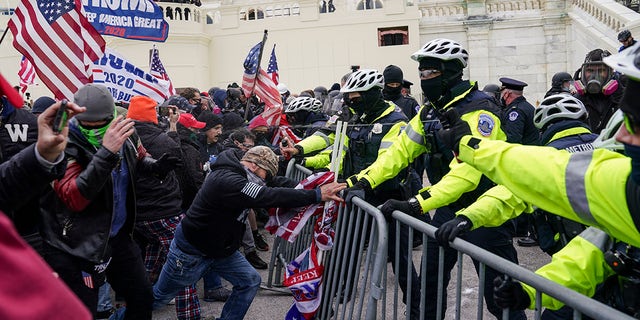 Trump supporters try to break through a police barrier, Wednesday, Jan. 6, 2021, at the Capitol in Washington. (AP Photo/John Minchillo)

The select committee resolution does not specifically lay out the process for choosing staff. But it does explicitly limit the scope of the committee’s investigation to the circumstances of the Jan. 6 attack, the failures of local and federal law enforcement that allowed the Capitol to be overrun, and the factors that contributed to the lead-up to the attack.

The committee also has no strict deadline, unlike the special commission which would have been forced to issue its final report by the end of the year. This means the select committee is likely to drag into the 2022 election year, something Democrats are likely happy with.

“January 6th was one of the darkest days in our nation’s history.  It is imperative that we establish the truth of that day and ensure such an attack cannot again happen,” Pelosi said in a statement earlier this week about the legislation.

Former President Donald Trump held a rally in Washington, D.C., on Jan. 6, shortly before Congress met to certify the results of the presidential election, which Trump has falsely claimed was stolen. Throngs of his supporters surrounded the Capitol and overran security in the complex, pushing their way into the building and forcing hundreds of lawmakers and former Vice President Mike Pence into hiding. The building was later cleared and the election results were certified.

“I led the charge to create a January 6th commission that would be external, independent, bipartisan, and equitable in membership and subpoena power,” Rep. John Katko, R-N.Y., who also voted to impeach Trump, said in a statement earlier this week. “The select committee proposed by Speaker Pelosi is literally the exact opposite of that. The select committee would have a skewed, 8 Democrat and 5 Republican panel of members, all 13 of whom would ultimately be picked by the Speaker herself.”

Katko added that the committee “would be a turbo-charged partisan exercise” and said he is unsure whether he would even participate.