(CNN Business)The television ratings for President Joe Biden’s first address to a joint session of Congress ﻿were far weaker than the equivalent events by past presidents. But the decline probably has more to do with the state of television than the state of the presidency.

And his State of the Union address last year, shortly before the pandemic, averaged 37 million viewers.

The pandemic accelerated what has already been evident for years: Gradual erosion in live TV audiences in the United States.

Simply put, as more people spend more time watching on-demand programming, the public is less inclined to watch live events. Sagging ratings for award shows like the Emmys and the Oscars have underscored this trend. 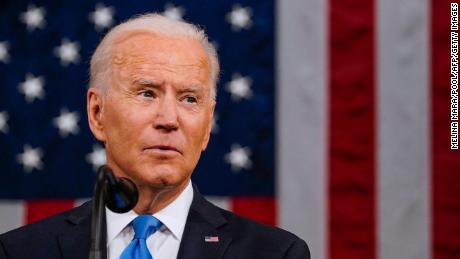 Additionally, Nielsen’s live-TV estimates don’t account for all the ways an event like a presidential address is delivered all across the internet, not to mention radio and other formats.
So the use of a single TV ratings figure as a shorthand for the total reach of a speech is getting less and less accurate over time.
Still, the performance of Wednesday’s address on live TV may be taken as a reflection of Biden’s deliberately low-key presidency, a sharp break from the drama and deceit of the Trump years.
Looking further back in time, when internet viewership was not a major factor, about 52 million tuned in on TV for Barack Obama’s first address to Congress in 2009, and 40 million for George W. Bush in 2001.
During Biden’s address on Wednesday night, ABC averaged 4 million viewers; NBC averaged 3.5 million; CBS, 3.4 million; and the Fox broadcast network, 1.6 million.
On cable, MSNBC averaged 4 million viewers and CNN netted 3.2 million, which is well above average for both channels.
The conservative Fox News Channel averaged 3 million viewers during the speech, which is only modestly higher than the network’s 9 p.m. performance earlier in the week. Speeches by Democrats tend to turn off Fox News viewers.