Fox News correspondent Rich Edson meets with patrol agents to witness the crisis at the border.

President Biden and Vice President Harris’ public schedules have placed little emphasis on the southern border, despite the ongoing crisis.

Biden has not had any immigration-related events on his public schedule in the past two weeks. Harris, who is Biden’s point person to deal with what the White House described as the “root causes” of the border crisis, has only had two such events since March 30: a call with Mexican President Andrés Manuel López Obrador on April 7 and a call with Guatemalan President Alejandro Giammattei on March 30.

Harris said in late March that she will visit the southern border, but weeks later there is still no update on when that trip will happen.

Harris took heat in March for laughing when a reporter asked if she would be visiting the border amid the growing migrant crisis. 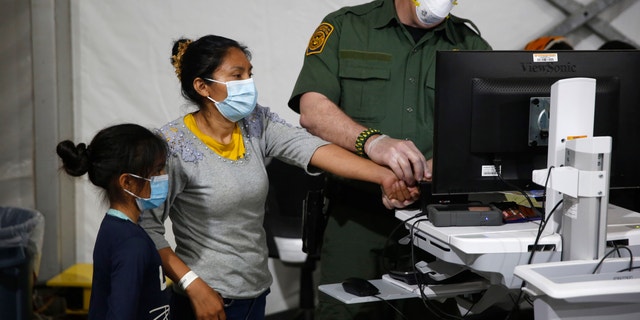 In this March 30, 2021, file photo, a migrant and her daughter have their biometric data entered at the intake area of the U.S. Department of Homeland Security holding facility, the main detention center for unaccompanied children in the Rio Grande Valley, in Donna, Texas. (AP Photo/Dario Lopez-Mills, Pool, File)

Shortly after, she said in a March 24 interview that she “absolutely” will go down to the border “at some point.”

Harris has traveled to Los Angeles, Oakland, Calif., and Chicago since taking on the immigration-related role. NBC News pointed out her lack of border-related events last week.

Biden said last month that Harris has “agreed to lead our diplomatic effort and work with those nations to accept the returnees, and enhance migration enforcement at their borders — at their borders.”

The White House later clarified that Harris wasn’t involved with the “border crisis,” but was instead focused on addressing the “root causes — not the border.”

Meanwhile, the Department of Health and Human Services offered federal employees four months of paid leave if they volunteered to help care for a surge of unaccompanied migrant children at immigration shelters near the southern border, according to a recent report.

The request applied to most federal workers as the Biden administration moved to relieve pressure on the overwhelmed facilities, the New York Times reported. As of last week, more than 2,700 federal employees volunteered to assist Health and Human Services officials with tasks ranging from childcare at shelters to IT services and food delivery.

Officials said border facilities have struggled to hire an adequate number of staffers, due in part to the politically fraught environment surrounding the border crisis. Thousands of unaccompanied minors have remained in custody at border facilities longer than legally permissible.

Fox News’ inquiry to the White House was not returned at the time of publication.