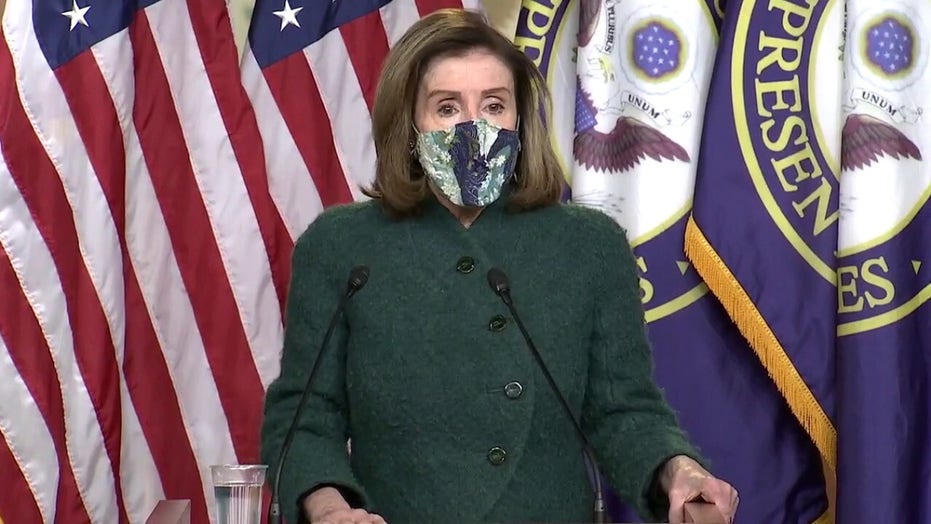 Pelosi, D-Calif., discusses ongoing security threats to members of Congress after the Jan. 6 Capitol riot during a news conference on Jan. 28, 2021.

Congressional Democrats have a plan to forever keep Republicans from winning elections and influencing policy decisions with H.R. 1 in the House, and the similar S. 1 in the Senate.

They want to empower the government to police more speech, force states to allow vote-by-mail and taxpayer funding of candidates, and silence Americans through fear by exposing their support for issue groups.

The fact that these bills are the first filed shows how high a priority they are, even though the nation is still in the middle of a pandemic and economic catastrophe. Under President Barack Obama, H.R. 1 was the stimulus, under President George W. Bush, it was “No Child Left Behind.” It’s also a sign that President Biden’s agenda is being dictated by House Speaker Nancy Pelosi, D-Calif., Senate Majority Leader Chuck Schumer, D-N.Y., and The Squad.

LIZ PEEK: BIDEN’S FIRST 10 DAYS – HERE’S HOW HE INFURIATED HALF THE NATION IN RECORD TIME

The mess of bad and unconstitutional policies in H.R. 1 are an existential threat to the Republican Party. They would shatter the ability of Americans to effectively organize, support causes they believe in, and hold government accountable.

H.R. 1 would undermine state election oversight, like efforts to clean up old voter rolls. It eliminates any restrictions on vote-by-mail. Taxpayers would be on the hook for matching 600% of campaign contributions to subsidize candidates they may disagree with – a practice that has been ripe for corruption.

It empowers federal regulators to categorize and regulate speech, including online.

New standards for “coordination” would be broad and confusing. All speech that simply mentions a candidate could be illegal four months out from an election if groups speak to the public. Worse, at any time, any funded communication that mentions an issue that might be associated with a politician could be illegal.

The government just has to say the speech “promotes,” “attacks,” “supports” or “opposes” a potential candidate.

Who would be doing the regulating? A newly-partisan Federal Election Commission, since the president would appoint the chairman, who would have new powers, and be a tie-breaking vote on a five-person board (down from a bipartisan six-person board).

On top of that, H.R. 1 would also force groups to disclose the personal information of supporters in multiple ways, including tacking the names of top supporters on advertisements.

Democrats can dress this up with talk of “dark money” and pretend they’re worried about money in politics, but they’re only worried about Americans with right-of-center views speaking out.

No billionaires will be harmed in the making of this legislation. The point is to silence dissent and shut down debate through fear, intimidation and overregulation.

It’s obvious why. There is a growing list of people who have been harassed, doxed, or worse, over their views – from well-known politicians being yelled at on planes, to truck drivers getting fired for contrived social media controversies.

We want moms starting groups to advocate for homeschooling, we want church-goers effectively petitioning government to reopen, we want taxpayers advocating for more reasonable tax rates. They won’t if they fear for their personal safety and security.

It is a disgrace that the rights of Americans to associate with and support organizations are under threat more than 60 years after the Supreme Court rebuked Alabama’s attempt to get the private information of NAACP supporters.

It is clear that privacy is core to our freedoms of speech and association.

There is still bipartisan opposition. The ACLU slammed H.R. 1 in 2019 saying, “They will have the effect of harming our public discourse by silencing necessary voices that would otherwise speak out about the public issues of the day.”

Democrat leadership doesn’t care. H.R. 1 is their top priority and defeating it should be Republicans’ top priority.

Fortunately, the American people understand what is at stake, and they believe in their right to privacy and security: 70% of voters support private giving and 70% don’t think anyone has a right to know what groups they contribute to, according to a People United for Privacy survey.

Many Republicans have not been as strong in defense of speech as they should. Now is the time for all right-of-center elected officials, organizations and voters to unite on this issue.