The Republican Party chairs in the first four states to hold presidential primaries and caucuses are teaming up to oppose a move by Nevada Democrats to disrupt the nominating calendar by moving their contest to the leadoff position.

GOP chairs Jeff Kaufman of Iowa, Steve Stepanek of New Hampshire, Drew McKissick of South Carolina and Michael McDonald of Nevada on Tuesday jointly issued a statement that made crystal clear their opposition to a Democratic sponsored bill that passed Nevada’s legislature.

“As the GOP leaders of the four carve-out states, we want to make clear that we stand together in protecting the presidential nominating schedule as it has existed for many years,” the four chairs emphasized in their statement. “Our alliance is strong and we will continue to work together to preserve this historic process.” 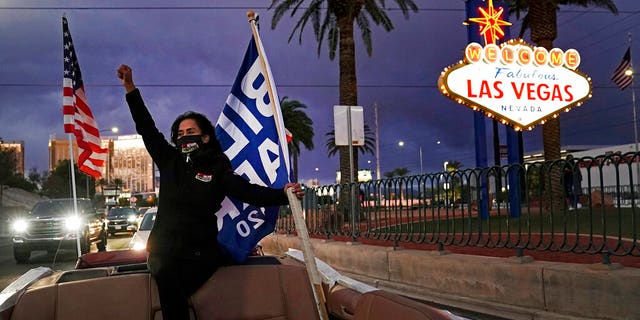 In this Nov. 7, 2020, file photo, Socorro Ulloa, a supporter of then-President-elect Joe Biden and Vice President-elect Kamala Harris, carries flags while riding in the back of a limousine in Las Vegas. Nevada lawmakers have passed a bill aiming to make the state the first to weigh in on the 2024 presidential primary contests.
(AP Photo/Jae C. Hong)

The Nevada measure – AB126 – would change the state’s caucus to a primary and move it to the first Tuesday in February in presidential nominating years. Nevada is currently third in the Democrats’ nominating calendar, trailing Iowa’s caucuses and New Hampshire’s primary. It’s fourth in the Republican schedule, trailing Iowa, New Hampshire, as well as South Carolina’s primary.

The bill still needs the signature of Democratic Gov. Steve Sisolak, who has not said if he’ll sign the legislation but who’s been supportive of the idea. And it would need the backing of the national parties – the Democratic National Committee (DNC) and the Republican National Committee (RNC). If Nevada moved up the date of their contest without the national parties signing off on the move, it could face sanctions and the loss of convention delegates.

The push for the Silver State bill comes after former longtime Sen. Harry Reid of Nevada, who served for eight years as Senate majority leader, starting making waves in December as he urged that his home state jump to the start of the nominating calendar.

Reid, who remains very influential in the national Democratic Party, was instrumental in moving Nevada’s caucuses in 2008 from an afterthought to third position in the Democratic presidential nominating calendar.

For years, the knock against Iowa and New Hampshire – among some Democrats – has been that the states are too White, lack any major urban areas and aren’t representative of a Democratic Party, which has become increasingly diverse over the past several decades. Nevada and South Carolina are much more diverse and have larger metropolitan areas than either Iowa or New Hampshire.

The statement by the Iowa, New Hampshire, South Carolina and Nevada GOP chairs wasn’t the first time they’ve teamed up this year to protect the current calendar. They held a hospitality session at the Republican National Committee’s spring meeting in Dallas to drum up support among fellow national committee members and state party officials for keeping the existing nominating calendar.

Stepanek told Fox News: “New Hampshire will always stand with Iowa, South Carolina and Nevada Republicans in defense of our first-in-the-nation primary and the current nomination calendar. Our joint efforts will strengthen and secure our carve-out primary schedule for years to come.”