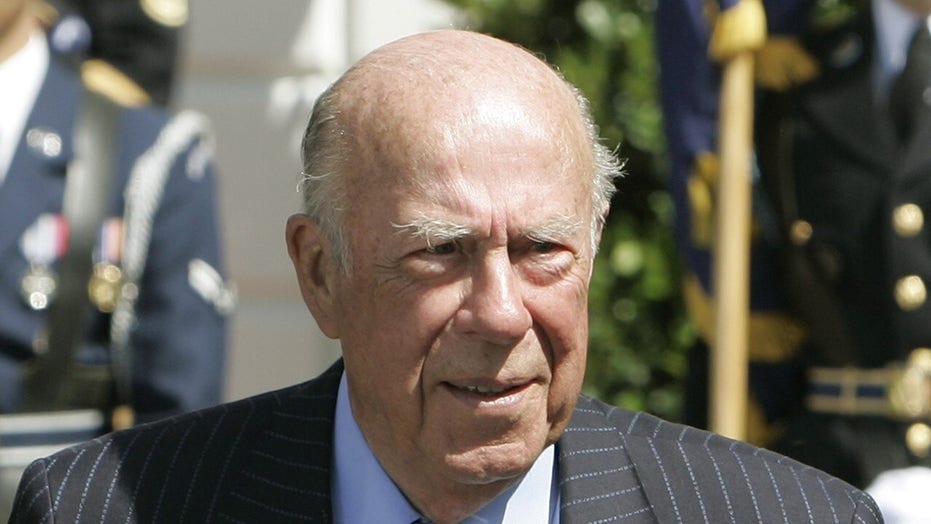 Shultz, a Hoover Institution distinguished fellow, held three major Cabinet posts in Republican administrations during his long career of public service. Before spending more than six years as Reagan’s secretary of state, he served as labor secretary, treasury secretary and director of the Office of Management and Budget under President Richard Nixon. His administration experience also included a stint as a senior staff economist with President Dwight D. Eisenhower’s Council of Economic Advisers.

As the nation’s chief diplomat in the 1980s, Shultz forged a course for peace in the Middle East and tried to enhance Cold War relations with the Soviet Union. 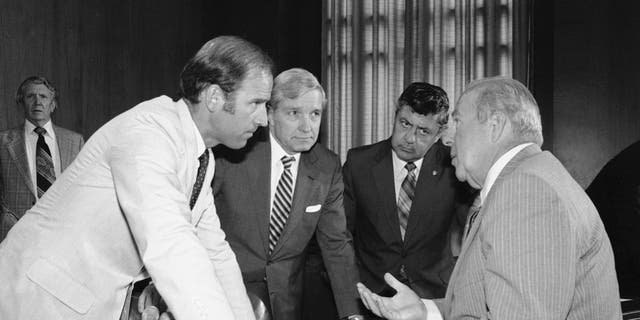 In this July 13, 1982, file photo Secretary of State designate George Shultz, right, speaks with members of the Senate Foreign Relations Committee prior to the start of the afternoon session of the panel on Capitol Hill in Washington. From left. Sen. Joseph Biden, D-Del.; Sen. Charles Percy, R-Ill., chairman of the panel and Sen. Edward Zorinsky, D-Neb.
(AP Photo/Ira Schwarz, File)

Shultz negotiated the first-ever treaty to decrease the size of the Soviet Union’s ground-based nuclear arsenals. The 1987 accord was a historic attempt to begin to reverse the nuclear arms race.

In 1989, Shultz was awarded the Presidential Medal of Freedom, the nation’s highest civilian honor.

He had been the oldest surviving former Cabinet member of any administration.

The war veteran was born Dec. 13, 1920 in New York City and raised in New Jersey. He studied economics and public and international affairs at Princeton University and graduated in 1942.

He then joined the Marine Corps and rose to the rank of captain as an artillery officer during World War II.

In 1949, he earned a Ph.D. in economics at MIT.  He taught at MIT and at the University of Chicago, where he was dean of the business school.

Shultz was most recently a professor emeritus at Stanford’s Graduate School of Business.

He was married to Helena “Obie” O’Brien, an Army nurse he met during World War II, and they had five children together. Two years after her death, in 1997, he married Charlotte Maillard, San Francisco’s protocol chief.

Shultz is survived by Maillard, his five children, 11 grandchildren and nine great-grandchildren.

A cause of death was not provided by the Hoover Institution.