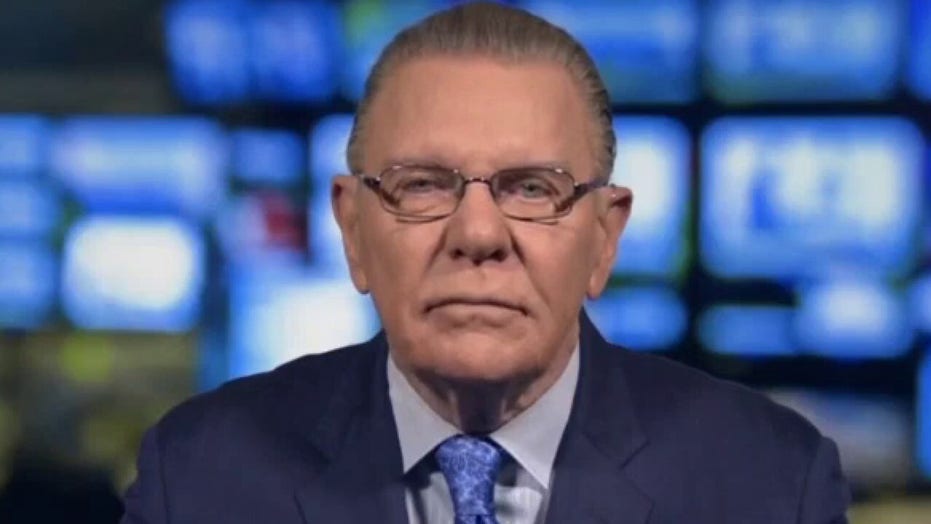 Gen. Jack Keane on WH briefing ‘Gang of 8’: Russia wanted US out of Afghanistan since day one

The ‘Gang of Eight’ was briefed by intelligence chiefs on Russia bounty allegations; reaction and analysis from retired four-star Army General Jack Keane on ‘Fox and Friends.’&nbsp;

Retired Gen. Jack Keane said on Friday that his sources in the military could not corroborate the report that Russia placed bounties on U.S. soldiers in Afghanistan.

“The problem is none of the other intelligence agencies or I think some of the other countries that are involved in Afghanistan along with us can verify that,” Keane told “Fox & Friends.”

BAIER PRESSES POMPEO ON BOUNTY REPORT: 'DOES THE RUSSIAN GOVERNMENT HAVE AMERICAN BLOOD ON ITS HANDS'?

The country's top intelligence officials on Thursday held a classified briefing with congressional leaders amid demands for more information on the reports that Russian agents offered Taliban-linked militants in Afghanistan thousands of dollars in bounties for killing American troops.

“Force protection is a primary purpose of intelligence. It should have the same importance to the Commander-in-Chief.  Any reports of threats on our troops must be pursued relentlessly," Pelosi and Senate Minority Leader Chuck Schumer, D-N.Y., said in a statement following the meeting. “These reports are coming to light in the context of the president being soft on [Russian President] Vladimir Putin when it comes to NATO, the G-7, Crimea, Ukraine and the ongoing undermining of the integrity of our elections. "

They added: “Our Armed Forces would be better served if President Trump spent more time reading his daily briefing and less time planning military parades and defending relics of the Confederacy.”

The Capitol Hill meetings come as President Trump has been under increasing pressure to provide answers about the U.S. response to Russia or the lack of one. But the president has continued to downplay the intelligence, calling it a “hoax” and “fake news” designed to damage him and the Republican Party.

Keane said that if the U.S. military commanders believed that the Russians placed bounties on U.S. soldiers in Afghanistan, they would have had the “loudest voice” in the entire national security team because they’re responsible.

“They’re on the ground with those soldiers,” Keane said. “They don’t have that evidence.”