New York (CNN Business)As people stay at home across the world, their latest favorite pastime is a 2018 murder mystery game set in space called Among Us.

The game’s exponential popularity drove its developers to announce on Thursday they were canceling a sequel to the game, to better focus on growing the existing version. The game reached over a million players on September 3 and had grown to over 3.5 million concurrent users worldwide by Friday.
“We canceled the sequel because we saw the opportunity to give back to the players a little bit faster than creating a new, better version,” Forest Willard, a developer at InnerSloth, which makes Among Us, told CNN Business. “It will be more work in the long run, but we’re excited for players to update the game, and suddenly there’s a brand new feature or map that unlocks new experiences.”

Among Us is based on other social deduction party games like Mafia where a group of innocents live their everyday lives while killers, who have hidden their identities, commit murders at night. The group must determine who is guilty and get rid of the imposters before they lose their majority.
InnerSloth, a three-person company, released Among Us in 2018. Willard is the programmer and handles the business of the company. It didn’t cause much of a stir at the time, although it grew popular in countries like Korea and Brazil. It wasn’t until this summer that the game took off in the US, when a Twitch streamer with a fanbase of 2.8 million viewers began to play it. 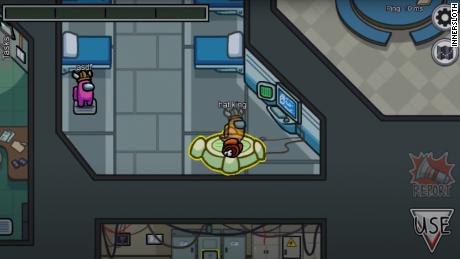 Among Us costs $5 on PC games store Steam or the indie store Itch.io, and it’s free with ads on mobile. Players can make additional purchases to decorate and customize their in-game characters. InnerSloth declined to comment on sales figures and total revenue.
The game requires four to 10 players, who are randomly assigned roles of either a crewmate or imposter. There are always more crew than imposters at the start. Throughout the game, crewmates try to complete their tasks and imposters try to murder the crew and sabotage the spaceship without getting caught.
Among Us involves a lot of lying, accusations and angry denials — a perfect recipe for social media engagement. YouTube’s biggest individual creator, PewDiePie, has played it, as has rapper and singer Soulja Boy.
Among Us isn’t the only indie game to take off this year. Fall Guys is a light-hearted battle royale where the players are jelly beans trying to make their way through mazes, jumping challenges and other activities to become the best out of 60 players. It sold over 7 million copies on the Steam store within a month of its August launch.

All of the popularity begs the question, what’s next for Among Us? InnerSloth developers know they must build on their success and keep players engaged. Their decision to cut a sequel makes sense, experts say.
“At this point making a sequel would end up dividing the audience, it’s a better idea to keep engagement high on the current game and drive further monetization through in-game purchases,” Cassia Curran, an adviser at Wings Interactive, a fund that invests in diverse games.

Willard, the Innersloth developer, said the team plans to add features to Among Us including the ability to add friends, a color blind mode and a way to customize controls.
“These just make the game easier for people to enjoy time and time again,” he said.
Source: Read Full Article

Related News:
Business News:
173383 New COVID Cases Reported In US In 24 Hours
UniCredit CEO steps down in clash with board
LG Chem to double China battery capacity to meet Tesla demand: Reuters, citing sources
Third-gen Hyundai i20 is a leap forward for Korean carmaker
Dirty Fuel Demand Jumps With More Ships Running Pollution Kits
Recent Posts
This website uses cookies to improve your user experience and to provide you with advertisements that are relevant to your interests. By continuing to browse the site you are agreeing to our use of cookies.Ok