Even during the deepest depths of the pandemic, you wouldn’t see people in South Korea hoarding toilet paper or pet food.

Instead, they developed another new habit: waiting on lines outside department stores, beginning at 5am, to buy items like a $US,9500 ($13,368) Chanel purse.

The so-called open run — a freestyle sprint to buy goods as soon as the stores open — began last year after shoppers tried to beat a price increase by the French brand. It has since expanded to include other designers. 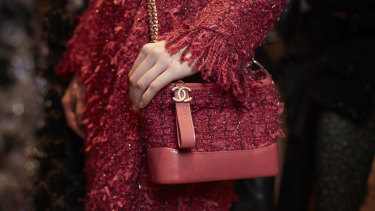 The frenzy over high-end goods in local stores started as the pandemic restricted people from going abroad to shop, while leaving a bit of money in their pockets from the lack of other discretionary spending on services made unavailable during lockdowns. Chanel Korea lifted prices for certain items four times this year, but that has stoked even more demand.

“The current price tag is going to be the cheapest you’ll ever see because the brand continues to jack up prices,” said Cho Eunbit, a 31-year-old shopper from Seoul. “People seem to desire Chanel even more because even if they can afford it, it’s incredibly difficult to get the exact item you want.”

The Asian nation is now the seventh-largest market for luxury brand items, amounting to about $US14.2 billion in sales this year, up 4.6 per cent from 2020, according to a report by Euromonitor International. Chanel has only nine boutiques across South Korea, but they accounted for about 8.5 per cent of the company’s total revenue in 2020, according to financial results compiled by Bloomberg.

‘I should’ve purchased a Chanel bag a few years ago, rather than investing my money in stocks. I would’ve made a lot more money with the bag.’

Cho wasn’t able to get a hold of a bag herself, so she instead turned to resellers, whose businesses have taken off. An active online second-hand market in South Korea has allowed people to easily make money by flipping luxury goods.

One of those resellers is Lana Park, 59, who never imagined that she would find a lucrative side gig doing this until she made 300,000 won ($356) in profit by selling one Chanel handbag. For about a year, she joined the open run, leaving her house at 4 am and trying to hit multiple Chanel boutiques in a day.

“It all started off because I enjoyed shopping, and it was something for me to do,” Park said. “But the market has gone absolutely crazy over the year with so many resellers adding ridiculous premiums.”

In an attempt to ease the overheated demand and crack down on resale, Chanel implemented a purchasing limit in October: Customers in South Korea are only allowed to purchase one of the Classic Flap bag and Coco Handle handbag each per year, as well as one of each item in the small leather goods category, a Chanel spokesperson said, adding that the company is taking actions at a local level as some products are particularly sought after.

Sales of luxury brands at department stores in South Korea continued to climb this year, surging 45 per cent in the first half from the same period in 2020, a statement from the trade ministry showed. Millennials and Gen Zs — who hate lagging behind others and want to live in the moment — are the main spenders, said Lee Eun-Hee, a professor of consumer studies at Inha University in Incheon.

‘You only live once’

“Chanel satisfies millennials and Gen Zs in multiple ways because it gives them the pleasure of buying something that’s scarce, while allowing them to make profits through resale,” Lee said by phone.

With home prices in South Korea surging, people in their 20s and 30s may feel that they’ll never be able to afford a down payment on a house. Instead, they’ll spend the savings they have on things they can enjoy now.

The average price of an apartment in Seoul more than doubled to 1.24 billion won ($1.47 million) in November from 607 million won in May 2017 when President Moon Jae-in took office, according to KB Financial Group. That’s a massive burden on Koreans in their 20s and 30s whose average monthly income is less than 3 million won.

It’s likely that Chanel will continue to increase prices next year, experts say. This year alone, the price of a classic medium flap bag rose about 30 per cent to 11.24 million won. Chanel considers changes in production and raw materials costs, as well as exchange rate fluctuations when adjusting prices, and the company makes sure there are no excessive price differences among different markets, the spokesperson said.

Han Ji-min, who paid 200,000 won more to buy a leather wallet from Chanel through a reseller, is one of the millennials undeterred by Chanel’s continued price hikes. Rather, she thinks it could be the safest investment she could make.

“I should’ve purchased a Chanel bag a few years ago, rather than investing my money in stocks,” said Han, 30, who works for a law firm. “I would’ve made a lot more money with the bag.”