Six in 10 voters would back someone other than President Biden if the 2024 presidential election were today, according to a Fox News national survey released Sunday. That makes his current reelection prospects dimmer than they ever were for his most recent predecessors, Donald Trump and Barack Obama.

At the end of Biden’s first year in office, economic anxiety is higher than a year ago, and many feel the pandemic is not at all under control. His job rating in both these areas is down in recent months, and over half of voters disapprove of Biden’s performance overall.

The president’s job rating has been underwater since October and that still holds true: 47% approve and 52% disapprove.

Overall, 54% approved of Biden at his 100-day mark in April. The 7-point decline since can be attributed almost solely to a drop among Democrats (from 95% in April to 85% today). Approval among Republicans and independents has changed by only a point or two over the same period. 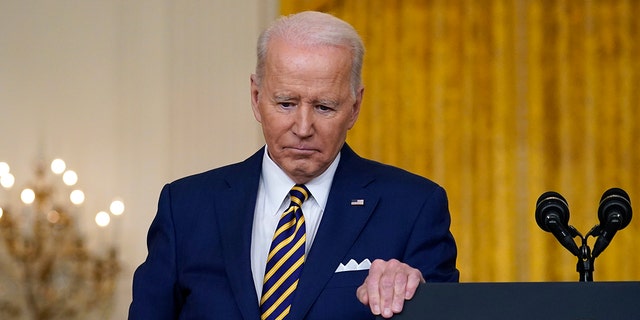 President Biden listens to a question during a news conference in the East Room of the White House in Washington Jan. 19, 2022.
(AP Photo/Susan Walsh)

Biden’s current job ratings are nearly identical to former President Donald Trump’s at this point in his presidency, as 45% approved and 53% disapproved in January 2018.

Biden’s ratings are also negative on top issues. A record 52% disapprove of his handling of the pandemic, up from 34% in early 2021. Even larger numbers disapprove on foreign policy (54%), the economy (58%) and border security (59%). 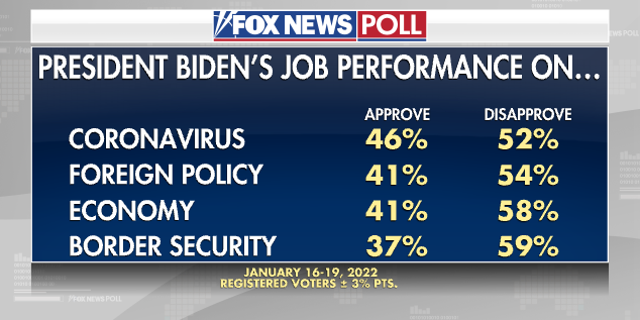 Seventy-three percent of voters say economic conditions are only fair or poor, up from 66% last December. 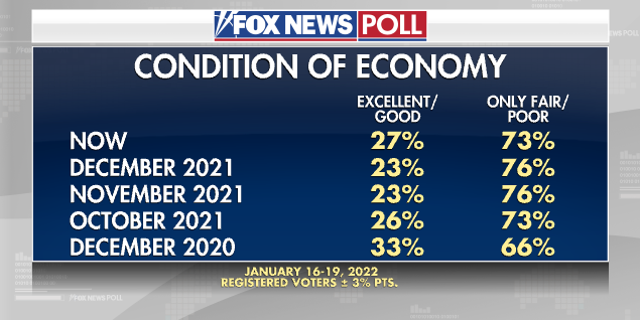 Even more, 85%, are worried about inflation, and that sentiment is bipartisan: 81% of Democrats and 91% of Republicans are concerned. 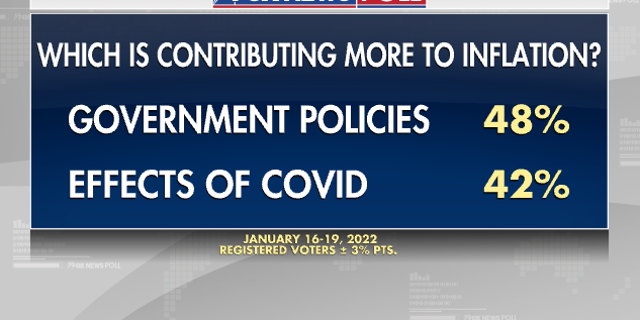 Republicans (80%) are also more likely than Democrats (56%) to think inflation is sticking around for another year or more. Overall, more than two-thirds feel that way (69%). 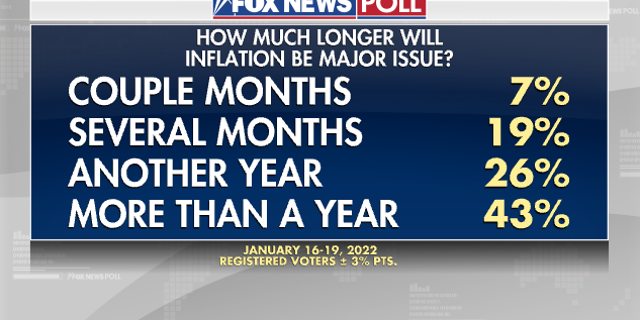 The percentage saying the pandemic is “not at all” under control jumped 13 points since last month, from 28 to 41%. Nearly three quarters (72%) remain concerned about coronavirus. 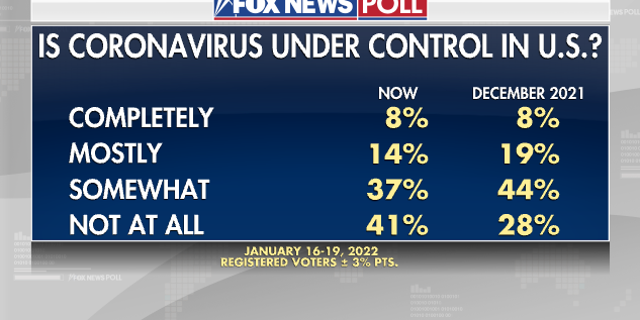 About two-thirds believe vaccines and masks are effective in the fight against COVID-19, while just over half say the same about frequent testing and vaccine mandates. Democrats are at least twice as likely as Republicans to think masks, mandates, and vaccines work. The gap is most narrow on vaccines: 86% of Democrats say effective vs. 51% of Republicans.

Just over half think the Centers for Disease Control and Prevention is doing a competent job, but voters cut the CDC slack on one particular issue: More attribute the agency’s changing pandemic advice to learning new information rather than an inability to communicate clearly. 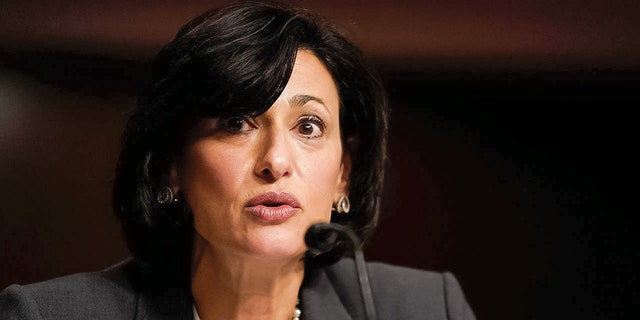 A large majority want children to have some sort of in-person school this term. Twenty-eight percent think schools should be fully open as usual, 27% say open with distancing and masks and 30% want a mix of in-person and remote. Fourteen percent prefer schools be fully remote.

Parents and non-parents hold similar views, with fewer than one in five favoring schools being fully remote.

More voters say they would back someone else over Biden in 2024 than ever said the same about former presidents Barack Obama and Donald Trump. 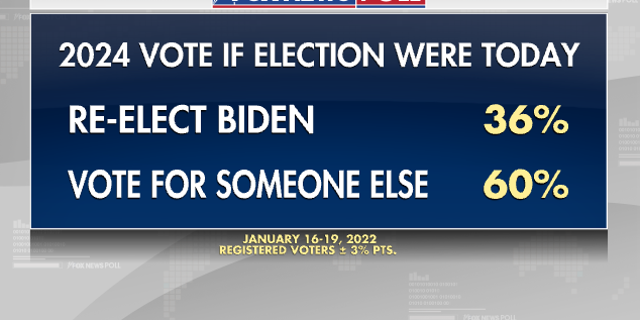 Seventy-two percent of Democrats would reelect Biden, including 48% who say “definitely.”  Similarly, among those approving of the job Biden is doing, 74% would reelect him (45 % definitely).

“These certainly aren’t numbers the Biden team wants, but Democratic defection is the main reason his generic reelect is low,” says Democratic pollster Chris Anderson, who jointly conducts Fox News surveys with Republican Daron Shaw. “It’s safe to assume most of these Democrats will back him if he is the nominee and the only choice against a Republican.”

Conducted Jan. 16-19, 2022, under the joint direction of Beacon Research (D) and Shaw & Company Research (R), this Fox News Poll includes interviews with 1,001 registered voters nationwide who were randomly selected from a national voter file and spoke with live interviewers on both landlines and cellphones. The total sample has a margin of sampling error of plus or minus three percentage points.