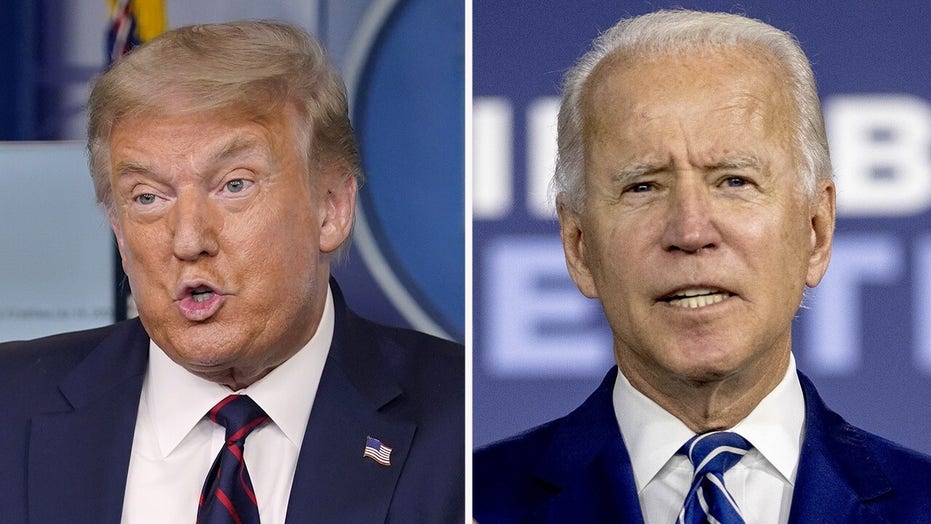 Does President Trump have his work cut out for him as Joe Biden leads in the polls? Reaction and analysis on ‘Outnumbered.’

Biden benefits from strong support among women, nonwhite voters, and those living in suburban areas, while Trump suffers from a lackluster performance among men and White voters.

In each state’s head-to-head matchup, the president underperforms both his 2016 vote share and his current job approval rating — and Biden’s edge is larger than the survey’s margin of sampling error.

At the same time, a lot could change between now and the election, which is more than three months away, and many voters are still undecided.

Notably, voters in each of these states can request and return absentee ballots starting mid-September.

Here’s how the results break down state-by-state: 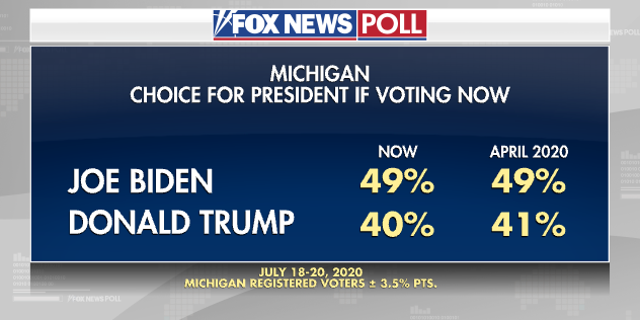 Eleven percent of voters are undecided or support a third-party candidate.

Women give Biden his lead.  They back him over Trump by an 18-point margin (53-35 percent), while support among men splits 45 percent apiece.

Some 45 percent of Michigan voters approve of the job he’s doing, while 54 percent disapprove.  That puts him underwater by 9 points.  In April, his ratings were upside-down by only 4 (47-51 percent).

Governor Gretchen Whitmer, a Democrat, does far better, with 64 percent approving of her job performance vs. 33 percent who disapprove — mostly unchanged since April.

Trump won Michigan in 2016 by a razor thin 0.23 points with 47.5 percent support.  The last time the state voted for the GOP presidential candidate before that was George H.W. Bush in 1988. 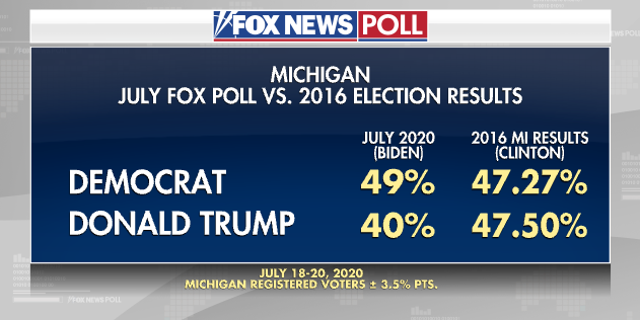 More voters trust Biden on race relations (by 18 points) and coronavirus (+19).  The two are roughly even on dealing with China (Biden +2) and handling the economy (Trump +3). 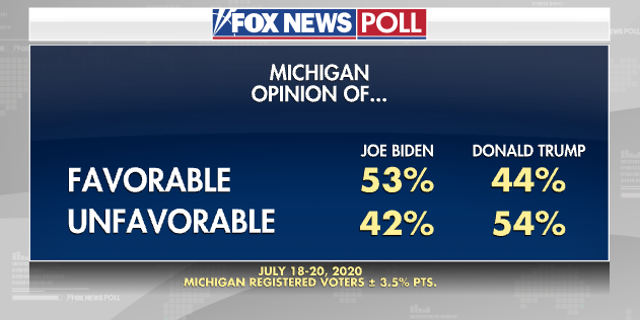 In the U.S. Senate race, Democratic Sen. Gary Peters is ahead of Republican John James by 48-38 percent.  In April, it was 46-36 percent.

Biden holds the advantage on key issues in a state targeted by Trump.  More Minnesota voters, by wide margins, trust Biden to handle race relations (by 28 points), coronavirus (+23), and China (+10).  On handling the economy, they split (Biden +1).

That puts Biden up by 13 points in the presidential race, 51 percent to Trump’s 38 percent.  Another 12 percent are unsure or back a third-party candidate. 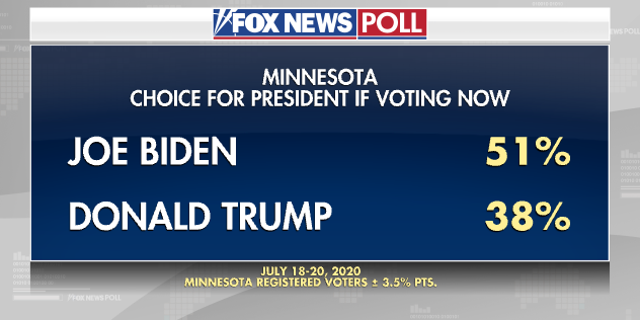 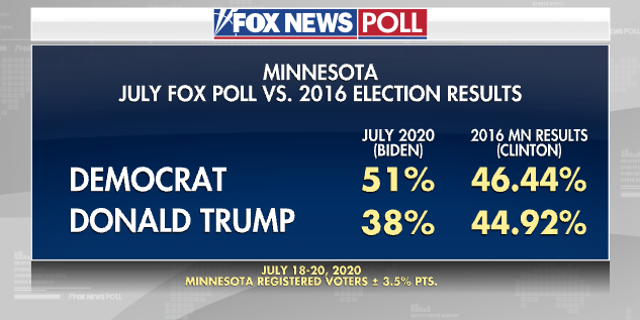 Trump’s up by 4 points among men and by 2 points among Whites without a college degree.  Nationally, Trump won no-degree Whites by 36 points, men by 11, and suburban voters by 2, according to the Pew Research Center validated 2016 voter data.

In addition, Biden garners the support of 92 percent of Democrats, while Trump receives 85 percent among Republicans.

Among voters who are extremely interested in the election, Biden’s lead expands to 27 points (61-34 percent).

Trump’s personal favorable rating is net negative by an 18-point margin: 40 percent view him positively, while 58 percent have an unfavorable opinion (including 48 percent “strongly” unfavorable). 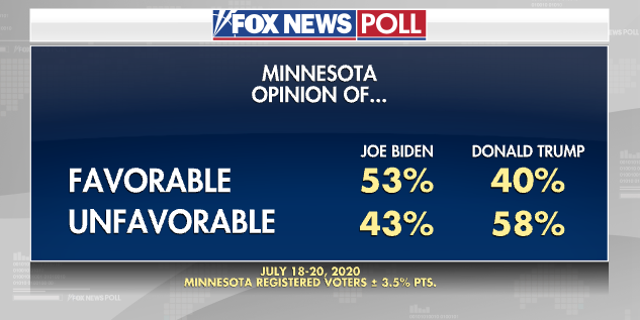 By a 60-33 percent margin, voters have a positive view of Minnesota Sen. Amy Klobuchar.  For Sen. Tina Smith, it is 41 percent favorable and 25 percent unfavorable, while 35 percent are unable to rate her.

Most, 80 percent, have a favorable opinion of their local police, while 56 percent view the Black Lives Matter movement positively.  George Floyd, an unarmed Black man, died while in police custody May 25 in Minneapolis.

Biden is ahead of Trump by 50-39 percent in the Keystone State. 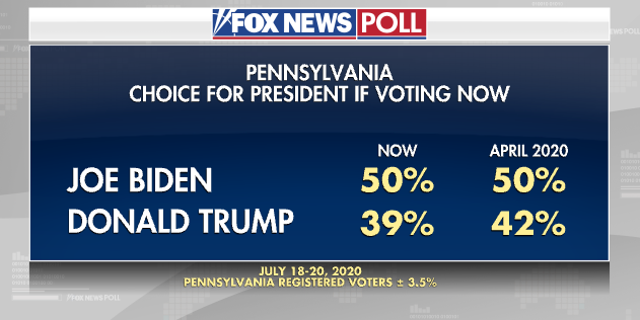 His advantage grows to 15 points among voters who are extremely interested in the election:  55-40 percent.

Overall, 1 in 10 is undecided or backs a third-party candidate. In April, Biden was up by 50-42 percent.

Trump leads among rural voters (+17 points) and Whites without a college degree (+10).

The candidates tie at 45 percent each among Whites.

Trump is seen as better able to handle the economy (+5 points), while Biden is more trusted on race relations (+22) and coronavirus (+18).  Voters are about equally likely to trust the candidates on dealing with China (Biden +3). 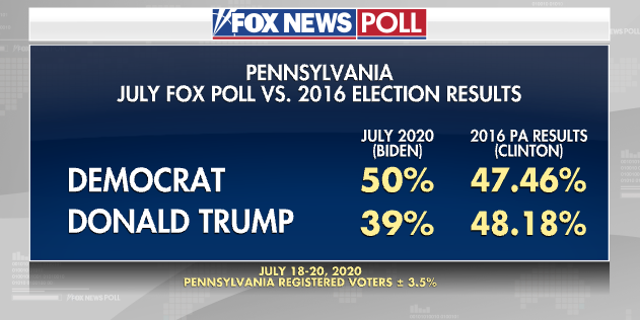 It’s the reverse for Biden, as 55 percent have a favorable view of him and 43 percent unfavorable. 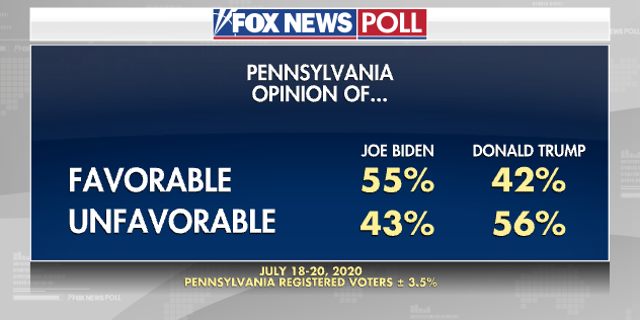 About 6 in 10 view the Black Lives Matter movement favorably (57 percent), more than 8 in 10 view their local police positively (84 percent), and nearly 9 in 10 have a positive opinion of people who wear face masks (88 percent).

Conducted July 18-20, 2020 under the joint direction of Beacon Research (D) and Shaw & Company (R), these Fox News surveys include interviews with 756 Michigan voters, 776 Minnesota voters, and 793 Pennsylvania voters randomly selected from statewide voter files, who spoke with live interviewers on landlines and cellphones. In all three states, the margin of sampling error is plus or minus 3.5 percentage points for the total sample of registered voters.