Mitch Roschelle: Inflation could ‘very quickly ‘spiral out of control’

Most voters worry about inflation, as sizable majorities call gas and grocery prices a financial hardship.  At the same time, they think the federal government’s additional unemployment benefits were a necessary lifeline during the pandemic, but are damaging the economy now.

That’s according to the latest Fox News national survey.

When asked to choose if last year’s expanded jobless benefits were a necessary lifeline for unemployed Americans or an unnecessary paid vacation, by a 62-35 percent margin voters say they were a lifeline. 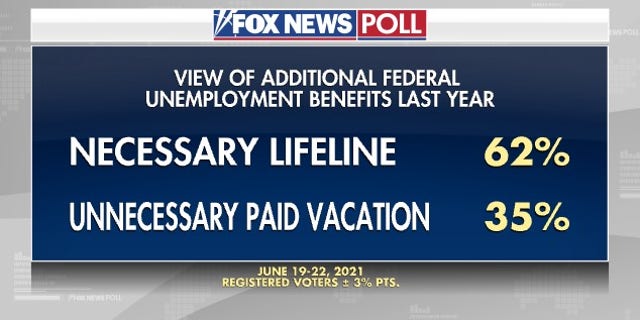 But when asked about those same benefits today, 53 percent think they are hurting the economy by discouraging people from looking for work, while 45 percent say they are helping the recovery by supporting job seekers. 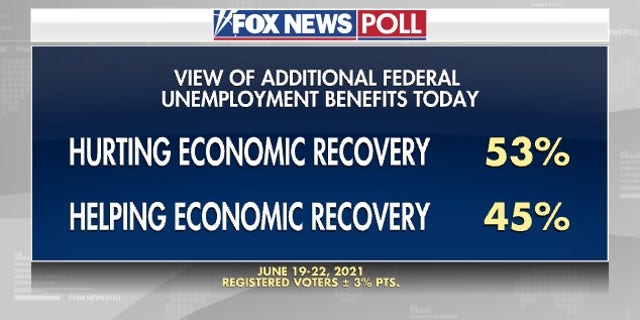 Twenty-five governors are stopping at least a portion of federal unemployment benefits, including the enhanced benefit of $300 weekly, in what they generally say is an attempt to end labor shortages in their states.

Seven voters in 10 (70 percent) call recent increases in grocery prices a financial hardship for their family.  It’s a “serious” hardship for 3 in 10 percent (29 percent).

The pocketbook pain is the same for gas prices, currently averaging $3 a gallon nationally, with 68 percent saying it is a hardship.  That includes 29 percent who say it is a “serious” hardship.  Some 57 percent call increases in health care costs a hardship and 45 percent say the same about mortgage/rent. 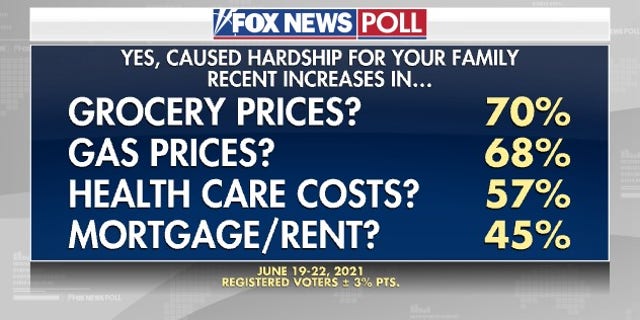 These financial difficulties hit some more than others:  78 percent of voters with household incomes below $50,000 annually call grocery prices a hardship compared to 62 percent among those with higher incomes.

In general, those most likely to say recent price increases are causing them financial difficulty include parents, Hispanics, those ages 30-45, and lower-income voters. 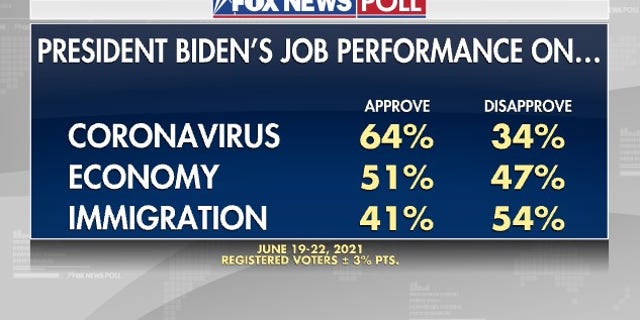 Currently, 56 percent approve of the president’s performance overall, while 43 percent disapprove.  His ratings stood at 54-42 percent in May.

“In looking at public opinion data on recent presidents, Biden’s approval numbers are fairly average for someone at this stage of the first term,” says Republican pollster Daron Shaw, who conducted the Fox News Poll with Democrat Chris Anderson.

“He scores slightly better than George W. Bush and Donald Trump, but a little lower than Barack Obama.  However we got here, in historical terms, these are about what one would expect from a president 150 days in.”

Views split over the job Kamala Harris is doing as vice president:  50 percent of voters approve, while 47 percent disapprove.  Among Democrats, she garners 85 percent approval, which is high — but still lower than the 93 percent her boss receives. 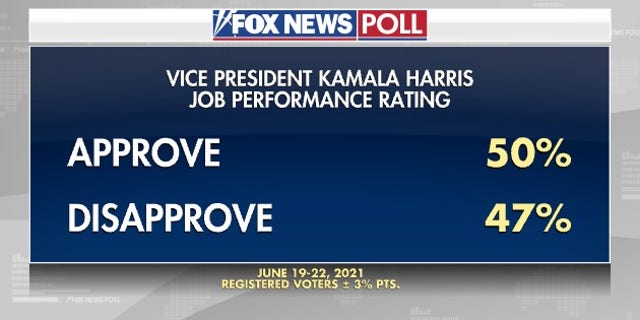 Thirty-four percent approve of Congress, up from 30 percent in April.  Nearly twice as many, 61 percent, disapprove.  Democrats approve of lawmakers by a 1-point (47-46 percent) margin, while independents disapprove by 28 points (34-62 percent) and Republicans disapprove by 54 points (21-75 percent).

Conducted June 19-22, 2021 under the joint direction of Beacon Research (D) and Shaw & Company (R), this Fox News Poll includes interviews with 1,001 randomly chosen registered voters nationwide who spoke with live interviewers on both landlines and cellphones.  The total sample has a margin of sampling error of plus or minus three percentage points.