(CNN)Apple (AAPL) plans to revoke Epic Games’ software development capabilities for its entire device ecosystem, marking the latest escalation of a war over one of the world’s most popular video games.

Epic Games, which makes Fortnite, said Monday that Apple’s decision takes effect Aug. 28 and will “cut Epic off from iOS and Mac development tools.”
The move comes after Epic tried to circumvent the app store rules of Apple and Google (GOOGL) last week by encouraging players to buy in-game currency for Fortnite directly with Epic, rather than within the Fortnite app, potentially diverting sales from the tech giants. Apple and Google soon removed the game, prompting Epic to sue both companies. 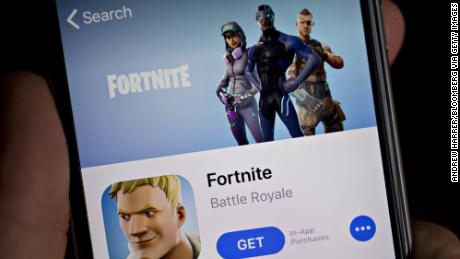 In response to Apple’s plan to crack down on Epic more broadly, Epic is now taking additional legal action. On Monday, the gaming company filed for a temporary restraining order and preliminary injunction against Apple. If approved, the court orders could prevent Apple from de-listing Fortnite from its app store. Epic argued that without the injunction, it is likely to suffer irreparable harm from Apple’s business practices.
“Apple specifically stated it would terminate Epic’s access to development tools, including those necessary for Epic to keep offering the world’s most popular graphics engine, the Unreal Engine,” said Epic in its legal filing. “The Unreal Engine is used to develop a wide array of products including games, films, biomedical research and virtual reality. Millions of developers rely on the Unreal Engine to develop software, and hundreds of millions of consumers use that software.”

In a statement, Apple said the issue is one that “Epic has created for itself.”
“Epic has been one of the most successful developers on the App Store, growing into a multibillion dollar business that reaches millions of iOS customers around the world,” Apple said in the statement. “We very much want to keep the company as part of the Apple Developer Program and their apps on the Store.”
Apple added that the situation could “easily be remedied if they submit an update of their app that reverts it to comply with the guidelines they agreed to and which apply to all developers. We won’t make an exception for Epic because we don’t think it’s right to put their business interests ahead of the guidelines that protect our customers.”

The wider legal battle could change how app stores work across the digital economy, and serve as a potential turning point for the two leading app store operators, who are already under scrutiny from regulators for their market dominance broadly.
In its lawsuits against Apple and Google last week, Epic argued the companies’ rules surrounding in-app payments are anticompetitive. Both companies have said that their platform rules are designed for the safety and security of mobile users.
Source: Read Full Article